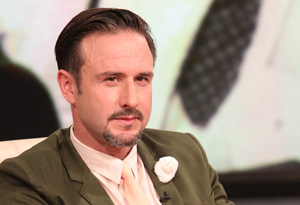 Photo: George Burns/Harpo Studios
PAGE 7
Before their separation, David says he'd always been faithful to his wife, and from the moment they got engaged, he'd been fully committed. "Monogamous to my core," he says.

After he and Courteney separated, David says he began seeing another woman—and the tabloids found out. "I get this call a couple weeks later from my publicist that says, 'All of the magazines are going to print tomorrow and [they] say, 'He's a cheater.' And you're on the cover. It's on every magazine,'" he says. "My blood just boiled because that is one thing I'm not."

What the tabloids didn't know is that Courteney and David had privately separated —and David was not happy to be falsely labeled as a cheater.

The next morning, David says he made a call to The Howard Stern Show and spoke candidly about his marriage. "I was drinking that night until like, 2 or 3 a.m., and I went to sleep and I set my clock for 5:30," he says. "That's when I called into Howard Stern and spilled the beans—because I didn't want to be labeled as a cheater."

David says he regrets what he said about Courteney. "I am so embarrassed about what I shared," he says.