Celine Dion Is Back 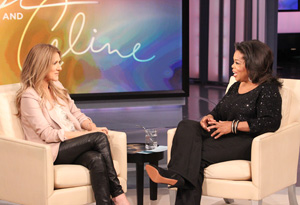 Photo: George Burns/Harpo Studios
PAGE 3
Choosing the boys' names was one of the hardest parts of having twins, Celine says. "It's hard to find one name, then we have to find two," she says. "I kind of stepped back from it a moment [and] asked René for his opinion on that. We were feeling different on names—we didn't agree to start with."

For a week after the twins were born, Celine says she and René still hadn't agreed on names, so they called them "Baby A" and "Baby B." Eventually, they made up their minds. "The first thing that popped into my heart was Nelson because we had the privilege of meeting with Mr. Nelson Mandela," she says.

Eddy was named after another of Celine and René's heroes, Eddy Marnay, the man who wrote Celine's first five French albums. "[He] had an amazing impact on both of our lives," Celine says. "So two heroes: Eddy and Nelson."