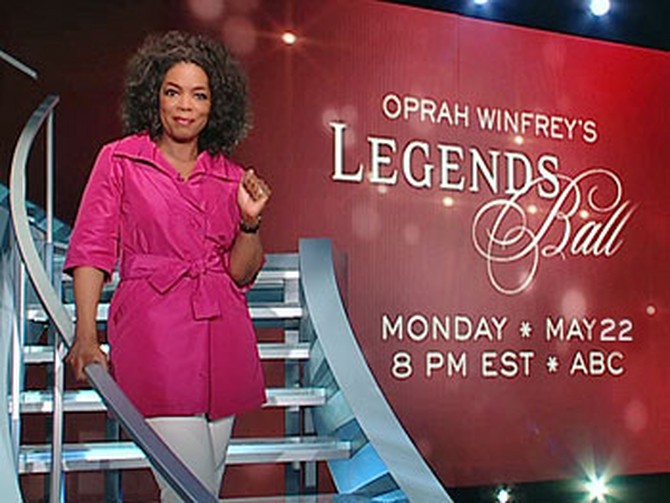 Oprah calls her Legends Weekend one of the great highlights of her life. During the three-day celebration at her home in Santa Barbara, she honored African-American women who have paved the way for others. Now, she's sharing the once-in-a-lifetime event for the first time during the ABC primetime special Oprah Winfrey's Legends Ball.

Celebrate Oprah's Legends and the legends in your own life by throwing a party to watch the party! Invite your friends over and toast the occasion with Oprah's favorite party drink!

Oprah's favorite cocktail is her Lemon Drop Martini, the same drink that was served at the Legends Ball. And who better to help her shake things up but super cook Rachael Ray!

"Everybody who's ever tried it, loves it," Oprah promises. 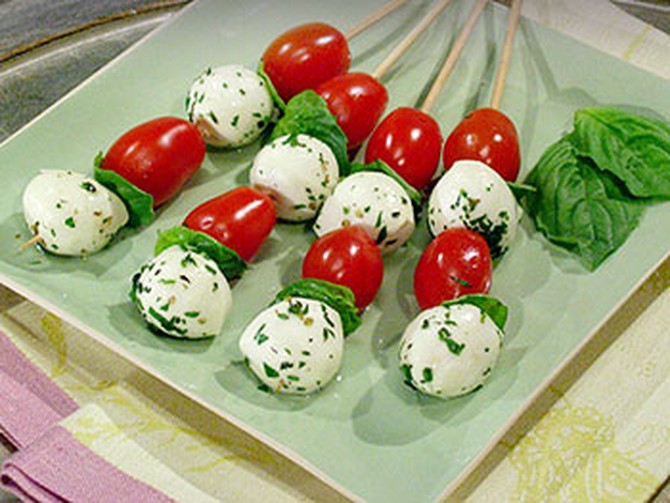 Queen of quick Rachael Ray says you can whip up four of her easy appetizers in five minutes. First up, Caprese on a Stick. By layering cherry tomatoes, fresh basil and marinated mozzarella you get all the flavors and colors of Italy at your fingertips! 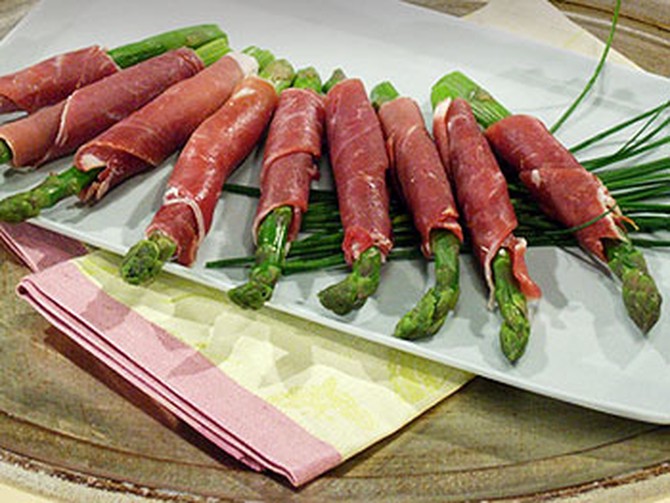 Rachael makes Prosciutto-Wrapped Asparagus Spears, a fast and easy dish that combines the salty flavors of prosciutto with the crunch of fresh asparagus. 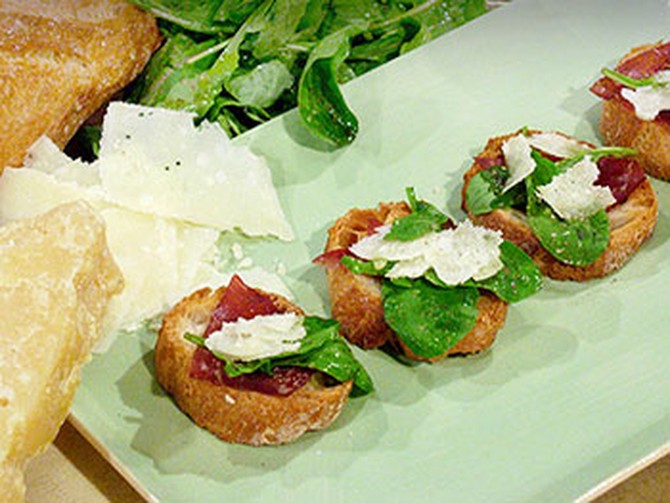 Bresaola Crostini with Baby Arugula is a simple appetizer that blends the strong flavors of beef with the tangy flavors of lemon and Parmesan. Yum! 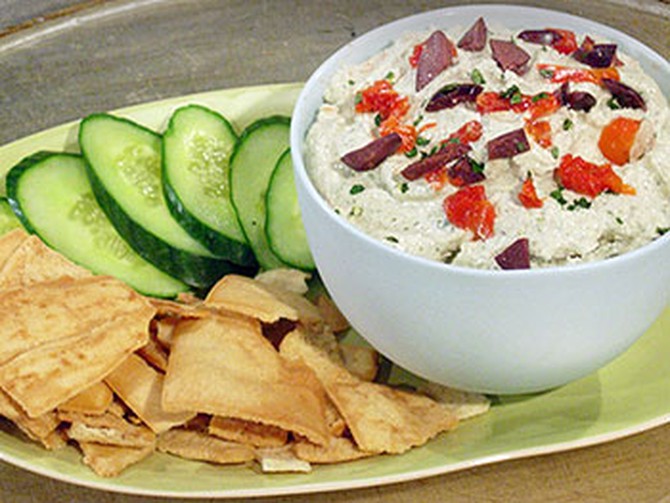 Rachael loves Feta Dip with Cucumber and Pita Chips. Feta and walnuts are blended to create a creamy dip—a perfect recipe for sharing! 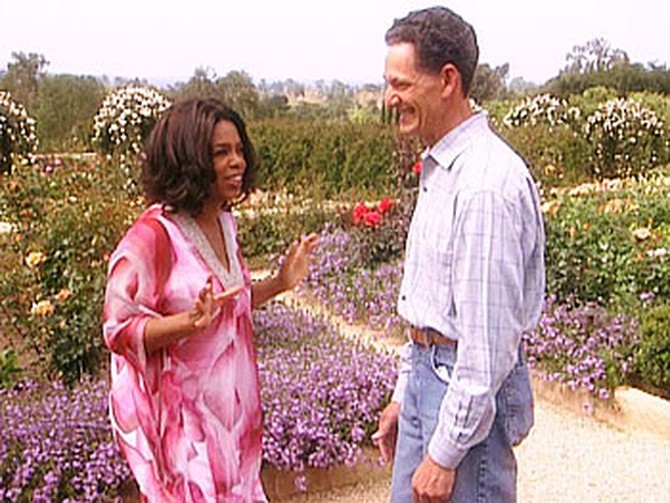 Oprah says one of her favorite places to be is her colorful Santa Barbara garden. She has over 500 plants in her rose garden. Each has its own special name, fragrance, color and blooms. Oprah says everything she's learned about roses is from rose gardener Dan Bifano. He says the key to growing beautiful roses is to pick the right rose for the environment you live in. Contact your local rose society or public library, says Dan, and they will teach you how to choose the best roses for your area. To ensure healthy plants, Dan says to provide roses with good drainage, good soil, good air circulation and lots of sunshine.

English gardens are another one of Oprah's favorites for the variety of plants and layers of flowerbeds. With Dan's help, Oprah designed her garden so she can gather a bounty of blossoms for her home. She's learned so much about roses that she's even working on creating her own hybrid with Dan! The Oprah Rose will have deep red, 8-inch blooms once it's developed. "I need a big rose with some color in it!" says Oprah. 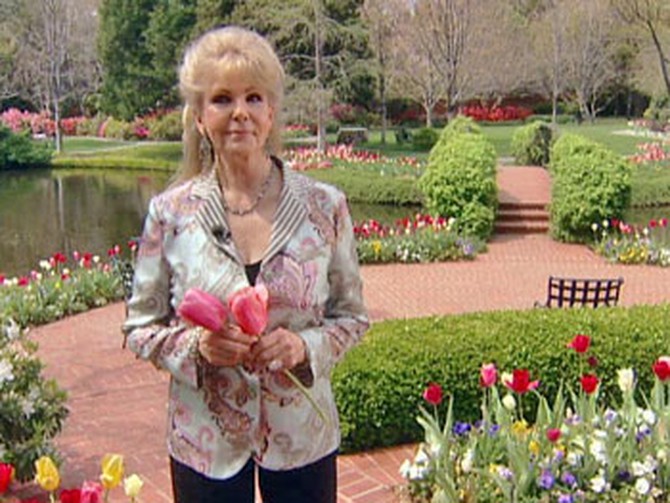 Every spring, Oprah's good friends, Annette and Harold Simmons, throw a tulip tea for friends at their Dallas, Texas, home to celebrate the flowering of thousands of tulips in their garden. Annette says as many as 17,000 bulbs are planted in December to create the spectacular scene.

In 2006, Annette hosted a special tulip ladies' luncheon. She says planning a party is all about being with friends, no matter how big or small your garden. Pick a color you love, says Annette, and build around that theme. Annette's color scheme started with pink Rosière glass, then she chose antique lace tablecloths and porcelain Flora Danica plates to help bring her garden theme to life.

These ladies who lunch love to give back, too. Annette and each of her guests made donations to Oprah's Angel Network for building Oprah's Katrina Homes. 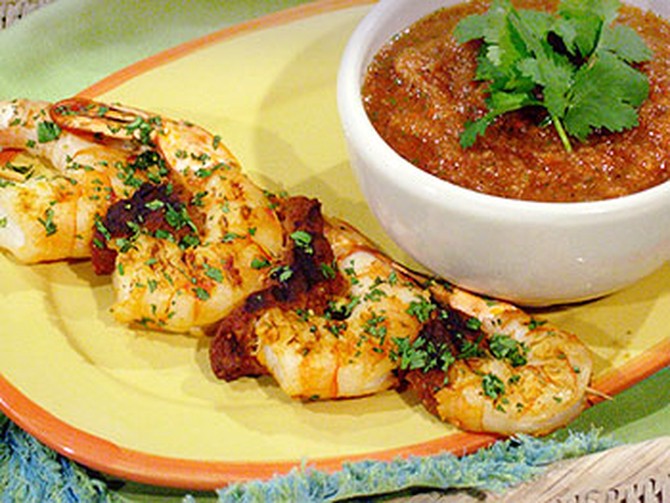 Rachael shares her quick and easy ways to grill up a summer feast. Forget labor intensive dry rubs and barbecue sauces—Rachael's all about escaping from a hot kitchen and grilling up foods fast.

Grilled Shrimp and Chorizo Skewers with Piquillo Gazpacho is a cinch to prepare, says Rachael. By alternating shrimp and chorizo on skewers, she creates a perfect flavor combination. And, her gazpacho doubles as a dipping sauce! 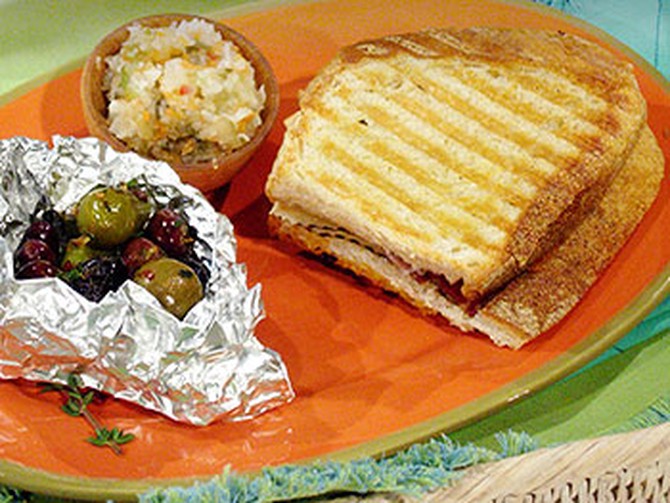 Rachael says her Charred Spanish Ham Cheese Melts and Hot Olives are sure to please. The best part is you don't need an expensive panini grill! After topping slices of crusty bread with Serrano ham, manchego cheese and giardiniera-pickle relish spread, simply place the sandwiches on the grill and top with a brick covered in aluminum foil! "This is delicious," Oprah says. 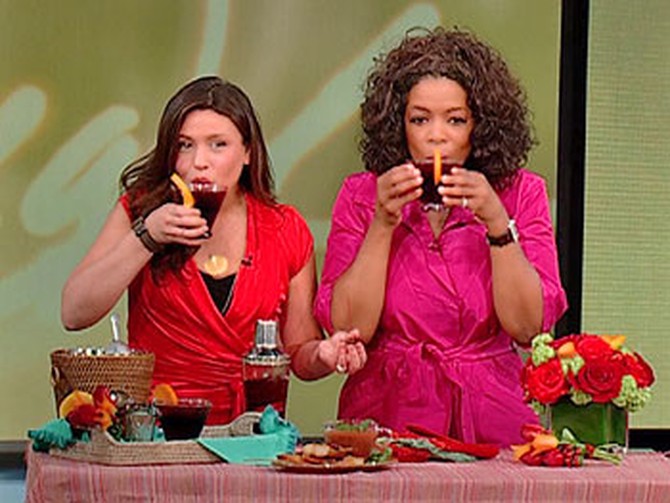 Who has time to let sangria steep all day? Not this cook! Luckily, Rachel says her Sangria Spritzer Cocktails are just as fruity and full of flavor—and take only a fraction of the time to mix up. 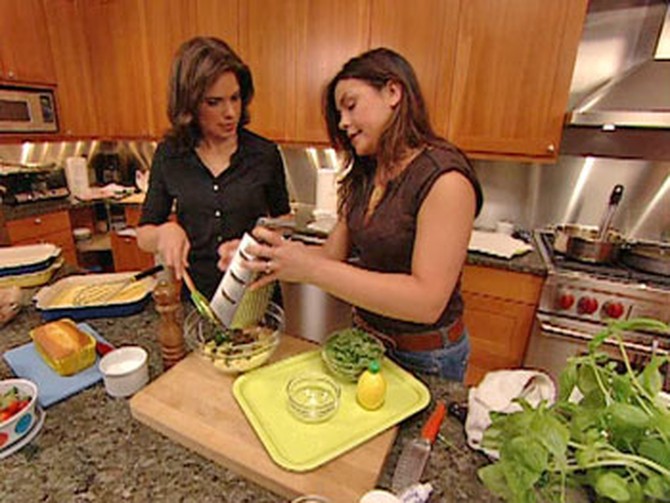 When it comes to creating a scrumptious springtime picnic, Rachael says she has a simple 30-minute strategy that will work for everybody. She puts her picnic packing skills to the test with CNN anchor and mother of four, Soledad O'Brien.

For starters, Rachael shows Soledad how to whip up two different types of finger sandwiches that are perfect for packing—Italian Club Finger Sandwiches and Devilish Egg Salad Sandwiches. Then Rachael reveals how to cook kid-friendly Chicken Strips and Asparagus Sticks step-by-step. 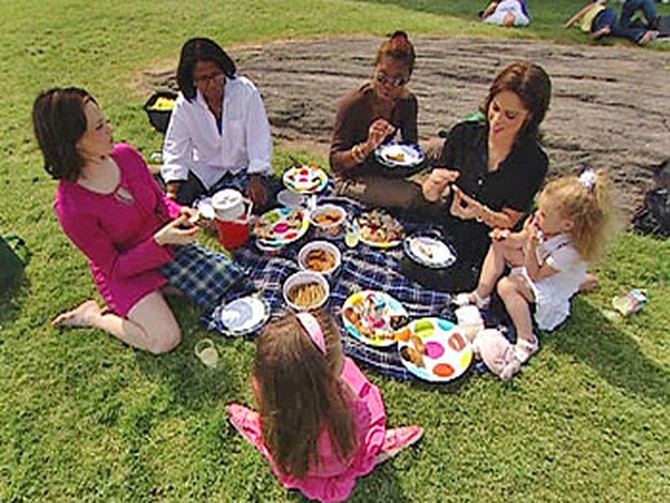 On a perfect sunny day in New York City's Central Park, Soledad, her two daughters and their friends gather for a picnic. Rachael's menu is a big hit! Aside from tasty treats, Rachael says there are a few key ingredients to remember when planning a successful picnic. 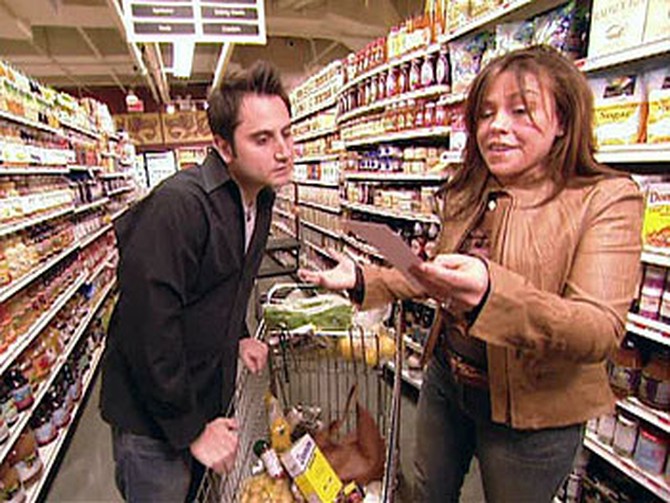 Jessica and Andrew, a newly engaged couple, enlist Rachael's help to pull them out of their take-out rut and teach them how to cook. Although it seems like a daunting task, Rachael says the young couple can achieve their culinary dreams with a well-stocked pantry and a little lesson in Grocery Shopping 101.

Armed with a shopping list, Rachael guides Andrew through the grocery store and points out staples for easy, everyday cooking. She says certain ingredients work wonders when you're in a pinch, such as lemons and limes. "Citrus flavors are terrific when you're cooking fast," Rachael says. The "best bargain," according to Rachael, is chopped frozen spinach. And, another necessity if you want foods to have a slow-cooked flavor in 30 minutes or less, says Rachael, is boxed stock. 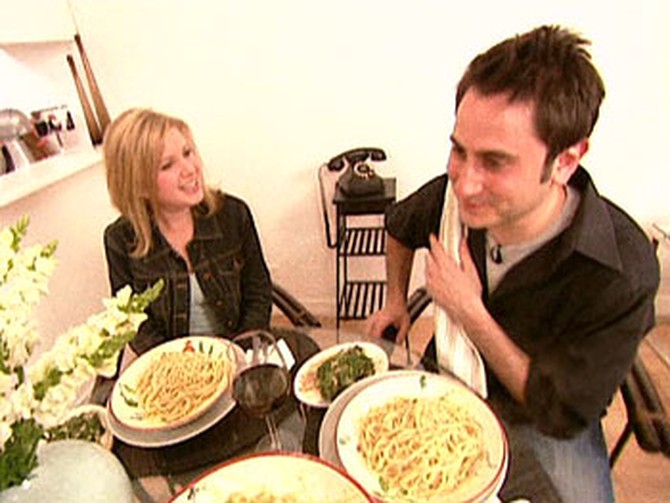 Back in the couple's kitchen, Rachael shows Andrew how to prepare an impressive and well-balanced meal for his fiancé using only ingredients from his freezer and cupboard. For the main course, Andrew cooks a classic Cheese and Pepper Pasta. Olive oil, butter, cheese and pepper blend together in the rich sauce.

Next, Andrew sautées frozen spinach with white beans and garlic in a touch of extra virgin olive oil for a healthy and tasty side dish.