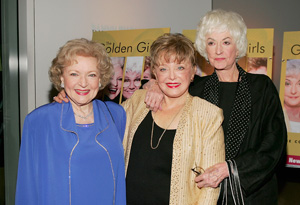 Photo: Carlo Allegri/Getty Images Entertainment
PAGE 3
Betty has starred in some of the most beloved television shows of all time, but says she had the most fun playing Rose on The Golden Girls. "I was on every week there, and with Mary, I just did like six or seven shows out of 22," she says. "So it was more fun to play with those other wonderful gals every week."

Despite what some viewers may think, Betty says Rose was not dumb. "She was terminally naive," she says. "I like Rose because she thought life was like a musical comedy. It was going to have a happy ending no matter what ever happened."