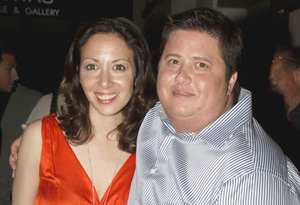 PAGE 8
From injections to surgery, Chaz's longtime girlfriend, Jenny, was by his side the entire transition. Jenny says she learned early in their relationship that Chaz was thinking of transitioning. "Actually I was told through an ex of his that he was, in fact, trans and wanted to be a man, which was presented in sort of a challenging way," she says. "So I said, 'Well, I better ask.' And I did. And he said to me, 'Yes, this is true.'"

Originally, Chaz told Jenny that he didn't plan on transitioning immediately but sometime in the future. "He said to me, 'I'm not going to do anything about it right now. I'm comfortable living as masculinely as possible. But I do not want to grow old as a woman, and I couldn't imagine doing that. So at some point, I will probably transition.'"

Watch Jenny and Chaz go through the transition together

Chaz says the idea of growing old as a woman repulsed him. "It was just a horrible thought," he says.

Then, three years into their relationship, Chaz says he and Jenny got into a fight that changed everything. "All the emotion and all the feelings that I had been repressing for so long literally came out in a primal scream of something that's never happened to me before. There were no words. I was just screaming and pounding the walls. I was like an insane person, and I think it hit both of us at that moment that I need to do this. This is what is inside. This is the pain and the anger and everything that's inside of me, and this is not healthy."

More The Oprah Winfrey Show
Excerpt from Transition: The Story of How I Became a Man
Shania Twain Speaks Out
Excerpt from From This Moment On
Fugitive Susan LeFevre
Lea T's Greatest Hits
10 Memorable Harpo Hookups
Everything Is Interrupted
Oprah's New Dogs!