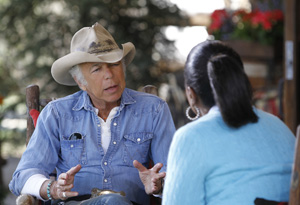 Photo: George Burns/Harpo Studios
PAGE 3
Ralph credits much of his success to his parents. "My father was an artist. When life was harder and he couldn't get jobs, he painted houses, but he was artistic. When I went to see his work, it was special," Ralph says. "Somewhere along the line, I felt I was special. I didn't know why."

When Ralph was 20 years old, he says he had a defining moment while working at a children's camp. He was voted the "general" in a game called color war. "This was a stamping in saying, 'Ralph, you really are special,'" he recalls. "Someone said to me, 'We're picking you. You're going to lead half of this camp.'"

Ralph says he knew he had something unique to offer the world, and that feeling was confirmed when he began to sell his ties in the late '60s. Ralph says Bloomingdale's was one of the first stores that expressed interest in his ties, but they wanted to make the design narrower and brand the ties as their own. "I said, 'I'm not doing that. I'd love to sell [to] Bloomingdale's. I know you're a great store,'" he says. "I said, 'I'm closing my bag, and I'm not going to sell [to] you. I really would like to. I think you could use these ties. I'm closing the bag.' And I left."

Six month later, Ralph says Bloomingdale's representatives called back and asked to put a rack of his ties in their store.