A Secret Sex World: Living on the Down Low 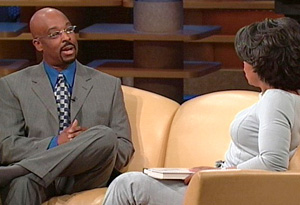 PAGE 5
J.L. says it's difficult for a woman to spot a man who's living on the D.L. "Women who are married, women who are comfortable, women who don't believe that this could happen to them need to take another look at what's going on in their house," J.L. says.

He also says a woman can't compete with a man's desires if he has feelings for other men. If a woman discovers that her husband is sleeping with another man, there is nothing she can do to stop his desire for men.

Where do men like J.L. meet potential sexual partners? Not at gay bars or nightclubs, he says. "If I'm going to pick up a brother, I'm going to where [a single woman] is going tonight," J.L. says. One place he says he goes to find a male partner is the black church.

"I can go anywhere in the country and find out what churches where most of the guys are, where I can make that connection," he says. "You're not going to find me in a gay club because I have nothing to do with the gay culture. That's them. That's their thing."

J.L. says he's intimate with both men and women, but he doesn't want to date men. "It's not 'I'm in love, let's get married, move together and have the perfect dog,'" he says. "If I was a gay man, I may want to be in a relationship with another man and play house. But when you're on the D.L., all you want to do is have sex. It's about gratification, not orientation."

More The Oprah Winfrey Show
Polygamy in America
Ten Rules to Live and Love By
Everything Is Interrupted
Kody and Robyn Brown's Wedding Day
Excerpt from Connect to Love
Excerpt from Transition: The Story of How I Became a Man
Becoming Chaz Bono
13 Memorable Cast Reunions