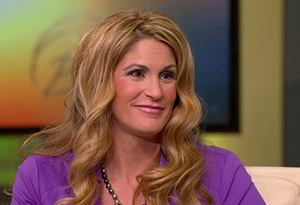 Dani Johnson grew up on welfare, was pregnant with her first child at 17, and homeless at 21. Despite all odds, Dani became a millionaire by age 23, starting her empire by selling a weight loss product from her car trunk. Now, she's a business owner, best-selling author and motivational speaker.

She's also one of the featured participants in ABC's new reality series Secret Millionaire. The show takes some of America's most successful self-made millionaires and puts them in the country's poorest areas. The goal of the experiment is to find and ultimately reward the unsung heroes who hold these communities up.

For one week, Dani gives up everything, hiding her true identity and living on $40 a week in a cramped one-bedroom apartment in the impoverished Western Heights neighborhood of Knoxville, Tennessee. "I once was on welfare. There were times where I can remember where I got home at 9 at night and had popcorn for dinner because there would be no food," she says. "I'm really super excited and nervous at the same time for the opportunity to be able to do this."