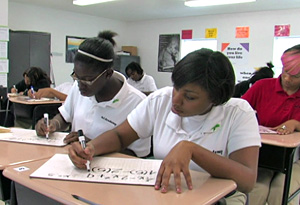 About the School:
Sci Academy opened in 2008 with 90 ninth-graders entering a rigorous and inspiring environment focused on preparing them for promising futures and professional careers.

The Mission:
Sci Academy strives to prepare all interested students for college success and equip them with the passion and skills to begin innovative and world-changing pursuits.

Academic Results:
More than half of the ninth-graders who entered Sci Academy's inaugural class had failed state promotional tests, and more than 70 percent read well below the ninth-grade level. The school's principal, Ben Marcovitz, says many of these students had missed a full year of schooling because of Hurricane Katrina and were many grades behind.

By designing a program that both addresses their deficits and accelerates them beyond the average, the freshman class later scored a 76 percent on the state test, making it the third most successful high school in New Orleans.

"It is possible to take a kid coming out of eighth grade who is four or five years behind grade level and get them ready for college in their ninth through 12th years, and that's what we're doing here," Ben says.