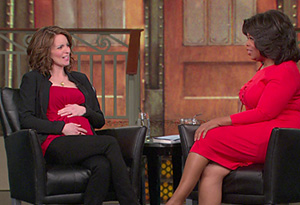 Tina Fey is the former head writer of Saturday Night Live and host of the show's "Weekend Update." She's also the Emmy-winning creator, writer and star of the NBC sitcom 30 Rock. Now, she's an author. Her sure-to-be bestselling book, Bossypants, is a comedic memoir of her rise to the top of comedy. "You're one of the smartest women on our planet right now," Oprah says.

But that's not Tina's only big news! She is also pregnant with her second baby.

Tina devoted a chapter of Bossypants to her dilemma over whether to try to have another child. "You get to 40 and you think, 'Do I really want to do it, or is it because I'm running out of time?' Also, I thought 30 Rock would be canceled by now and I'd have time to do it," she says. "My husband and I decided that, rather than risk having the show end and in several years and feeling like part of our family was missing, that we were going to prioritize a family."