These of-the-moment words (see especially slide 2) are often mispronounced. The authors of You're Saying It Wrong are here to help.
By Ross Petras and Kathryn Petras 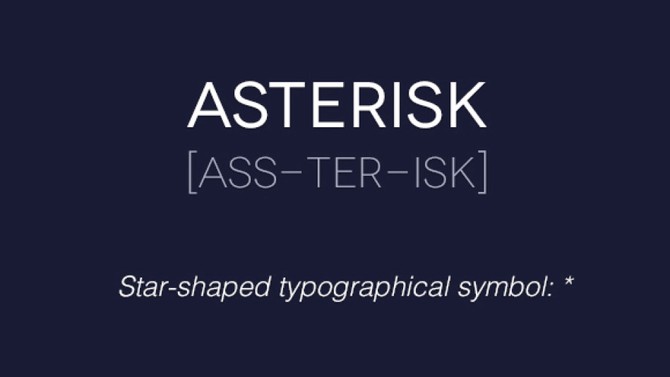 6 of 8
asterisk
People have been mispronouncing "asterisk" since the word entered the English language from Late Latin (asteriscus from the ancient Greek asteriskos, meaning "little star.")

The problem here is switching the correct "sk" ending with a "ks" ending. (Some people take it a step further and drop the s.) If you do it or have done it, you are not alone. People have been switching letters and sounds in English (and other languages) since language began. It is called metathesis—the rearranging of sounds in a word.
Published 10/28/2016
PREVIOUS | NEXT
More Books
7 Delightful Forgotten English Words
8 Introspective Books That Will Lift You Up
Jeffrey Eugenides: How to Believe in Yourself—Even If You Sometimes Don't
Jodi Picoult's Rules for Life
Join the Conversation: Oprah's Book Club 2.0
The Sun Does Shine Reading Guide
Deliverance: Oprah Talks to The Sun Does Shine Author Anthony Ray Hinton
The Book Gayle King Is Raving About (and More Favorites)