Using Our Power for Change 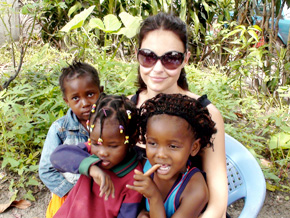 Ashley Judd is an actress and humanitarian who has served as global ambassador for global health organization Population Services International (PSI) since 2002. Judd shares with Oprah.com her experiences working with PSI in Africa and why she's happy that Uwem Akpan's Say You're One of Them is being read by so many.
I am very grateful that Uwem Akpan's new book Say You're One of Them is receiving such acclaim and attention. "An Ex-mas Feast" is an incredibly evocative and vivid description of life in urban slums; I urge everyone to read it and share it with their family and friends. It is an important story—one that needs to be told in our country.

As I read his words, I was blown away by how Akpan captures the exact details of urban slum life, the normal details of a family living together in a setting of incredible poverty, pressure, despair, humor and love, with coping mechanisms and adaptations that have grown out of an unnameable urge to survive.

The story brought me right back to the many slums I have visited, including Nairobi's. Five years ago, during one of my trips as a board member and Global Ambassador for PSI, I was maneuvering the same crowded streets Maisha and her young brother walk in "An Ex-mas Feast." After visiting a couple of gritty brothels—some where prostituted women have only a sheet to hang between themselves and other women as they spend time with clients in crowded, shared rooms—and speaking with the women about how they could protect themselves from HIV, I met Schola. A teenager who towered over me, Schola had a simultaneous toughness and fragility. We sat on a caved-in sofa in a weirdly painted room, devoid of any other furniture, in a brothel that rents rooms by the quarter-hour.

Cautious of others listening in, she whispered her story to me, which she realized she had never told another living soul. How could she know her story is neither unique nor different? Orphaned as a teenager, she had no rights to any of her family's property or goods because she was a girl. She became homeless when the remaining family pushed her out, and her boyfriend left her when she fell pregnant. She was forced to resort to prostitution to feed herself and her baby once her breast milk was no longer enough to nourish his growing body. When we met, she was pregnant with her second child (by a paying client? I don't recall); she was only 18. The good news in her life was a kindly neighbor who watched her toddler while she stationed her ever-growing body on the streets of Nairobi each night, searching for a meager income. I remember how deeply it bothered her that strange men touched her now-engorged breasts.

Stories like those of Maisha and Schola are very common. These girls and women routinely do what is appalling for us to even contemplate. Some are trafficked or sold into this life (human trafficking recently surpassed drugs as the second-largest industry in the world, after arms); others, like Schola and Maisha are forced to make this choiceless choice to survive. In most cases, a simple education and a stronger standing in society would offer enough opportunities and safety to prevent their exploitation

I am deeply grateful that Akpan is telling these stories. It is my most earnest hope that the subjects' voices are heard, that you are as moved as I and that each of us uses whatever position or power we may have to improve the lives of women like Schola and Maisha around the world. We can, and we must, each do our part to prevent another generation of girls and boys from being born into poverty and exploitation.


PSI is a leading global health organization with programs targeting malaria, child survival, HIV and reproductive health. Working in partnership within the public and private sectors and harnessing the power of the markets, PSI provides lifesaving products, clinical services and behavior change communications that empower the world's most vulnerable populations to lead healthier lives. Learn more at PSI.org.

More on Say You're One of Them

How Say You're One of Them inspired Angelique Kidjo

Uwem Akpan on faith and fiction