About the Book Great Expectations by Charles Dickens

Adapted from the Reading Group Guide by Penguin Books, of Penguin Group (USA) 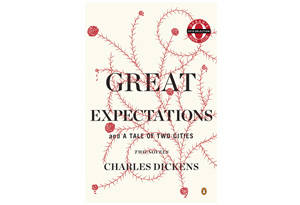 An unforgettable tale of fate and a chance encounter between two strangers that radically and arbitrarily alters the lives of everyone around them.
Great Expectations begins on Christmas Eve, 1812, when a 7-year-old orphan named Pip has a terrifying encounter with an escaped convict in a graveyard on the wild Kent marshes, and it ends with a grown-up Pip in a familiar garden in the winter of 1840. Over the course of nearly three decades, we follow as a series of events—a summons to meet the bitter, decaying Miss Havisham and her beautiful, cold-hearted ward Estella; the sudden generosity of a mysterious benefactor—seem to conspire to change Pip's life forever.

Pip eagerly abandons his humble origins to begin a new life as a gentleman—a task that carries the many twists, turns and cliffhangers that Charles Dickens is known for.

Originally published a few chapters at a time in a magazine, each installment in this suspenseful novel adds another layer to Pip's education about love and the world around him and depicts the adversity he faces as he discovers the true nature of his "great expectations."

Narrated by a middle-aged Pip, Great Expectations can be read on many levels—as a morality play of a young boy's coming of age and his unexpected rise from the lower to the leisure class, or as an ironic commentary and social critique on how money affects everyone around it. It can also be enjoyed as a suspense-filled mystery complete with secrets, shady characters, thieves and murderers of all shapes and sizes.

Considered by many critics to be Charles Dickens' most psychologically acute self-portrait, Great Expectations is without a doubt one of Dickens's most fully realized literary creations.


Spoiler alert: Keep reading if you want to learn more about the parallels between Dickens' and Pip's lives

Like the character Pip, Dickens also had a difficult upbringing and struggled as a boy. The writing of Great Expectations can be viewed as a cathartic attempt by Dickens to come to terms with the painful facts of his childhood—particularly his family's chronic economic instability, which leads to his eventual imprisonment for failure to pay his debts.


Working to Live, Living to Work

That Pip becomes Joe's apprentice as a blacksmith is no random event. When Dickens was 12 years old, he was consigned to work as a child laborer at Warren's Blacking factory and was separated from his family as a result—all of which took place over the course of two months. This period in young Dickens' life, then, represents both a literal and metaphorical orphaning. This sense of primal loss and fear of impending economic ruin manifested itself later in Dickens' own Herculean and obsessive efforts to busy himself (often simultaneously) as a writer, editor and public speaker—as if this were the only way he could ensure himself and his family of a financial solvency that his own father could never provide.


How Pip Succeeds Where Dickens Did Not

Where the creator (Dickens) and his creation (Pip) diverge is that Pip (through his suffering and disappointment) learns to accept his station in life. By the end of his saga, Pip has, for the most part, shed his illusions (his "expectations") and is able to live a simple but fulfilling life as a clerk in the company of his great friend, Herbert Pocket.

Dickens, on the other hand, seems to have never adequately internalized the lessons of his own life and success. In an autobiographical fragment, he wrote: "Even now, famous and caressed and happy, I often forget in my dreams that I have a dear wife and children; even that I am a man; and wander desolately back to that time of my life" (as a child laborer).

Serialized between December 1, 1860, and August 3, 1861, Great Expectations was an extraordinary success, selling (midway through its run) more than 100,000 copies weekly in Dickens' magazine All the Year Round.

Published in book form in July 1861, it was considered by contemporary critics to represent a return to Dickens at the peak of his powers, deftly mixing comedy and tragedy and with a rich brew of major and minor characters. By the end of that summer, the book had gone through four printings. Later critics were equally responsive. Playwright George Bernard Shaw felt that Great Expectations was Dickens' "most compactly perfect book," and the respected poet Swinburne found Dickens' novel to be unparalleled "in the whole range of English fiction."

Penguin Books and Penguin Classics wish to thank and credit the following writers and books for information used in creating this Reading Group Guide: