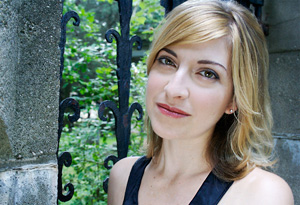 Photo credit: Christa Parravani
Her writing notebooks tell the tale of a directed, yet inquisitive mind. Filled with scribbles, notes and edit after edit, Julie Orringer has an uncanny ability to rewrite a story until it's just right. Her long list of illustrious awards would make even a seasoned writer blush—two Yale Review Editors' Prizes for best story of the year, the Paris Review Discovery Prize, the Cohen Award for Best Fiction, a National Magazine Award and two Pushcart Prizes—and her eagerly anticipated novel The Invisible Bridge was selected by Amazon as the Best Book of the Month for May 2010.

But there had to be days when she wasn't confident that all that editing would pay off. A graduate of Cornell and the Iowa Writers Workshop, Julie found herself in San Francisco, working a series of less than desirable jobs and amassing "a fat folder of rejection letters" until that wonderful day when her story "What We Save" was accepted at The Yale Review. Other acceptances followed, and so did a Stegner Fellowship in the creative writing program at Stanford University.
Today, her first short-story collection, How to Breathe Underwater, is required reading for all Stanford University freshmen. Dealing with themes of young women in a moment of difficult transition, it was a San Francisco Chronicle and LA Times Best Book of the Year, as well as a New York Times Notable Book.

Now, Julie is working on two new chapters from her home in Brooklyn—researching a new novel and mothering her 2-week-old baby boy. In between diaper changes, Julie answered 20 questions exclusively for Oprah.com readers.

1. How did you start writing?

When I was 2 or 3 years old, my dad, who was a medical resident at the time and hardly had a minute to himself, sat me on his knee and asked me to tell him a story. He recorded what I said in a tiny book he made from cut-up index cards. We illustrated it together. This became a habit. I still have about 10 of the books we made before I was 5. Titles include The Very Tiny Owl, The New Baby and The Bowling Party. Thanks to my dad, my earliest conception of books included the notion that you could write them, not just read them.

2. What book had the biggest impact on you? Why?

I think it had to be Frances Hodgson Burnett's The Secret Garden, which I read when I was 7 and had the chicken pox. For days, I could do nothing but lie in bed, and I fell headlong into the world of that novel—the world of sharp-tongued and sallow Mary, a natural storyteller who'd been transplanted from India to a gloomy and mysterious old house on an English moor. As she unlocks the secrets of her own family, brings a neglected garden into flower, meets a series of Yorkshire types and tartly rouses her ailing cousin from his real and imagined illnesses, she emerges from her own grief and gloom. The book was a revelation, not just because the world it described was so palpable and real, but because the hero was a young girl and a storyteller—and because the author was a woman.

3. Have you ever read or written a perfect sentence? What was it?

I can't claim to have written one, but I've certainly read many that seem perfect. Here's one of my favorites, from Stephen Dunn's Different Hours: "If beauty comes/ it comes startled, hiding scars,/ out of what can barely be endured."

4. What was the oddest job you ever had?

When I was 23 and had just moved to San Francisco, I worked for a year and a half as the receptionist at a fertility clinic. I learned to say "sperm donor" and "egg donor" in Spanish, French and Cantonese. The parade of yearning, hope, love, loss and triumph that made its way through our waiting room every day was almost too much to bear at times, but when people would come in with their miraculous babies, it would all seem worth it.

5. What is your greatest career coup?

Every writer's life depends on strokes of luck. Not long after I quit my job at the fertility clinic, a junior editor at the Paris Review (the poet and future New Yorker writer Dana Goodyear) called and asked if I had anything to submit for their new writers' issue. I sent a short story called "When She Is Old and I Am Famous," about an American painting student in Florence who gets a visit from her beautiful and unbearable cousin. The Paris Review took the story. From that one publication, more or less directly, came a few prizes, a relationship with the literary agent I'm still working with today and a fellowship at Stanford that gave me time to finish my short story collection.

6. Which individual has, for better or worse, had the single greatest influence on your life?

My mother, who was a talented pediatrician and a force for good in many people's lives. Like many women of her generation, I think she felt acute pressure to be successful in her field and close to her children at the same time; the books and records she gave me carried the message that women could do and be anything. There were times, I think, when she really felt the strain of trying to do and be everything at once, but she managed the balance with a great deal of grace. She would come home from long hours at work to play with me or help me with school projects or just to hold me at the end of a long day. Now that I have a new baby boy of my own, I find myself thinking a great deal about how she managed to distribute her energies without spreading herself too thin. Though I don't know if I'll be able to match her balance, it's wonderful to have her example to follow.

What talent would Julie Orringer most like to possess?

7. What is the biggest obstacle you have overcome or challenge you have ever faced?

Again the answer has to do with my mother, who was diagnosed with breast cancer when I was 10 and my siblings 5 and 2. I was old enough to understand what was going on, but my little brother and sister could only feel the effects of my parents' stress and grief as the illness returned again and again. Throughout much of our childhood, we lived with the prospect of losing our mother. At the same time, her amazing resilience made us feel as if she must be immortal somehow—as if the grim course of the disease might apply to others but not to her. Her death, even after a 10-year struggle, came as a shock. The greatest challenge, I think, was learning to live in the world without her.

8. What characteristic(s) do you admire most in others?

Generosity and sharpness of mind, particularly when they coexist.

9. What talent would you most like to possess?<br>
The miraculous ability to walk into a room, meet dozens of people and remember their names! I know people who can do this, and I'm speechless with envy. I also want very badly to learn French cookery. And I've been taking tap-dancing classes here in New York. And I'd love to figure out how to be chronically punctual, instead of chronically late.

10. What inspires you most?

My husband's indefatigable work ethic and his basic sweetness and empathy. And my baby boy's perfect, trusting little face.

11. What is your greatest fear?

Two weeks ago, the answer to that question would have been drastically different. I might have said that what I feared most was regret—failing to take a chance on something that might turn out to be wonderful even if the cost was high. Now that my little son is in the world, my deepest fears are all for his safety—by which I mean the more immediate concerns every mother faces, as well as greater concerns for the world he'll grow up to inherit.

12. What gives you hope about the world today?

The grand machinery we've got now for the communication of information. At its best, the Internet can function as a giant empathy engine; by putting us in touch with other human beings all over the world in an intimate way, it might—one hopes!—lead us to act with greater understanding of the impact we have on each other and on our planet.

13. What is your most valued possession?

Maybe it's this ultrasound photo of my little son, taken at 27 weeks. It's the first time I saw him smile.

14. What is one thing you have always wanted?

Another question whose answer has recently changed! Before a few weeks ago, I might have said it was to see my work making its way into the world; though that's still true, as soon as I held this sweet little kid in my arms, I knew that he was what I'd always wanted.

Julie Orringer opens up about her secret guilty pleasures

15. What is one book you've been meaning to read?

Paul Harding's Tinkers, the novel that just won the Pulitzer Prize—a quiet book that chronicles the thoughts of an elderly man as he remembers his own remarkable father and considers his family's unusual talent and vocation for fixing what is broken.

16. What is your favorite film?

I think it's got to be The Philadelphia Story. I could watch that movie a hundred times and still fall in love anew with Kate Hepburn's coolness, Cary Grant's wry wit and James Stewart's teasing intelligence. Though the characters are idealized as 1940s movie characters are, they're also believably, gloriously imperfect. "After all," Hepburn's character (almost) says, "you'll never be, you can't be, a first-rate writer or a first-rate human being until you've learned to have some small regard for human frailty."

17. What would your theme song be?

18. What is your favorite food?

19. What is your secret guilty pleasure?

Staying up very, very late. And skinny-dipping. And sleeping late.

As a writer, a mother and a woman who knew how to laugh at herself.