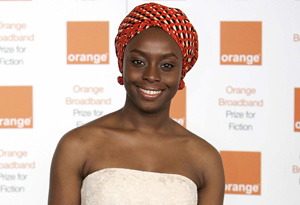 Photo: AFP/Getty Images
Chimamanda Ngozi Adichie is a 30-something worth watching. At 19, although she had already been studying medicine at the University of Nigeria, Chimamanda decided to come to the United States to study communications and political science. Her first two novels—Purple Hibiscus (2003) and the 2007 Orange Broadband Prize winner Half of a Yellow Sun—both explore what it means to be Nigerian and what it means to be Nigerian-American. As her fiction was receiving accolades, the Nigerian-born author also received master's degrees from both Johns Hopkins and Yale University. In 2008, she received a MacArthur Foundation Fellowship, nicknamed "the genius award."
Now, her latest short story collection, The Thing Around Your Neck, is available in trade paperback and is climbing the best-seller lists. Two of her new stories—"Cell One" and "The Headstrong Historian"—were previously published and well received in The New Yorker. Most recently, The New Yorker placed her on its "20 Under 40" list of fiction writers to watch.

Before Chimamanda continues her ascent on the literary ladder, she answered 20 questions exclusively for Oprah.com readers.

1. What was the oddest job you ever had?

Receptionist at a pediatrician's office. Odd only because of my overenthusiastic whipping out of crayons and paper to cheer the kids up, when drawing was often the last thing they wanted to do.

2. How did you start writing?

I've been writing since I was old enough to spell.

3. What is your greatest career coup?

Perhaps winning the MacArthur Foundation "genius" grant—because it was so unexpected.

4. What is your favorite film?

Babette's Feast, Eve's Bayou, The Remains of the Day.

5. What would your theme song be?

I don't know. I generally don't think in terms of theme songs.

6. Which individual has, for better or worse, had the single greatest influence on your life?

7. What book had the biggest impact on you? Why?

Camara Laye's The Dark Child and Chinua Achebe's Things Fall Apart because they gave me a glorious shock of recognition. Until I read them, I was not consciously aware that people who looked like me could exist in books. I grew up in a Nigerian university town, and all the books I read before then were foreign children's books with white characters doing unfamiliar things.