12 Stops Along the Pacific Crest Trail

Marvel at the mountain ranges, waterfalls and desert landscapes that Wild author Cheryl Strayed trekked past during her Pacific Crest Trail hike. 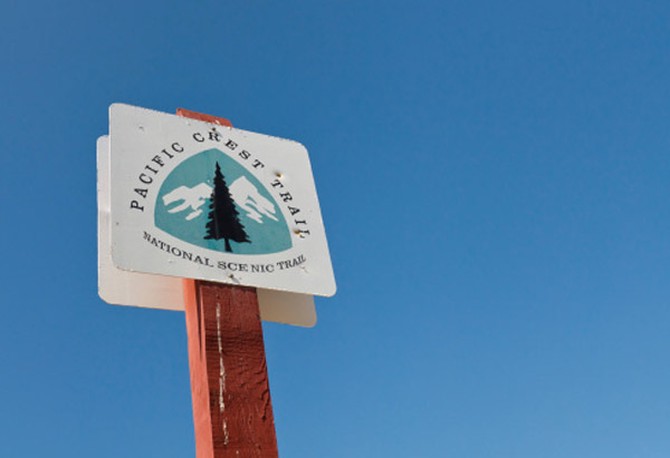 Seven months later, she laced up her boots and began her 1,100-mile journey across deserts, mountains, rivers, highways and rainforests. 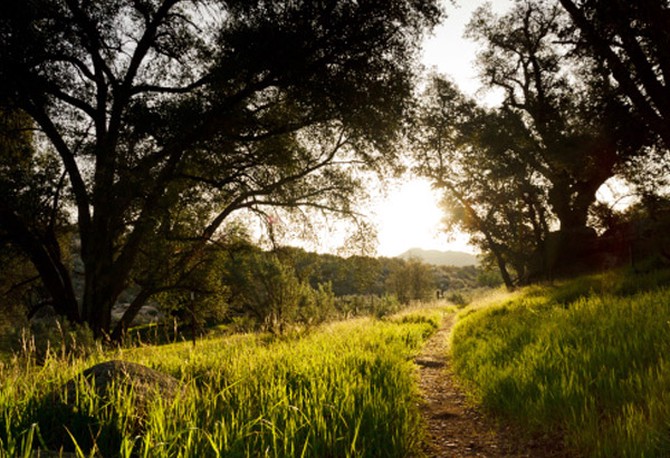 The Pacific Crest Trail in Morning Light
The Pacific Crest Trail Association reports that about 300 people attempt to walk the full length of the PCT every year. Along the way, many are aided by “trail angels,” men and women who live just off the beaten path and often offer shelter, showers, hot meals and laundry rooms to hikers. 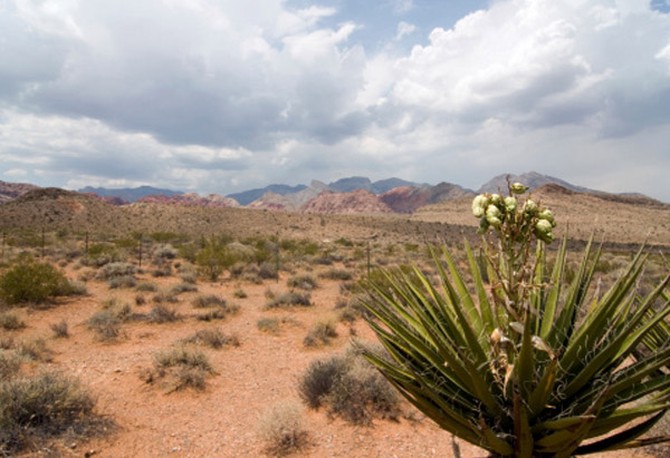 Mojave Desert
Cheryl began her journey in Mojave, California, a small town located in the southwestern region of the Mojave Desert. This arid ecosystem is spotted with sand dunes, rock formations and yucca trees. These distinctive trees are better known by another name—Joshua trees. It's believed that Mormon settlers gave the trees this name because the limbs reminded them of the biblical story of Joshua, a man who reached his arms up to the sky in prayer. 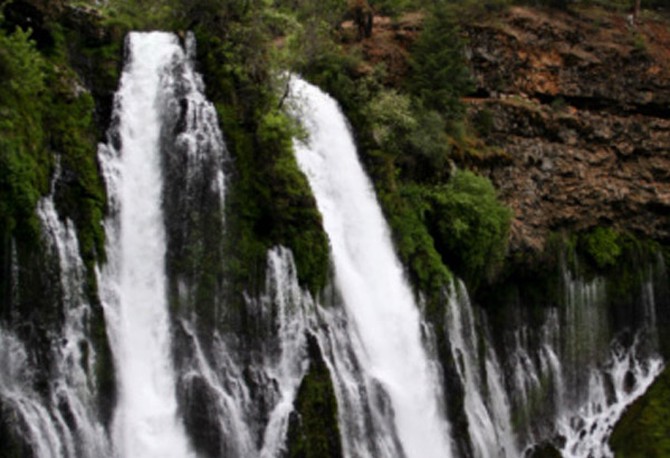 Burney Falls
Every year, thousands of tourists—and PCT hikers—snap photos of Burney Falls, the thundering waterfall located in California's McArthur-Burney Falls Memorial State Park. Though this 129-foot attraction isn't the highest or the largest waterfall in the state, many believe it's the most beautiful. 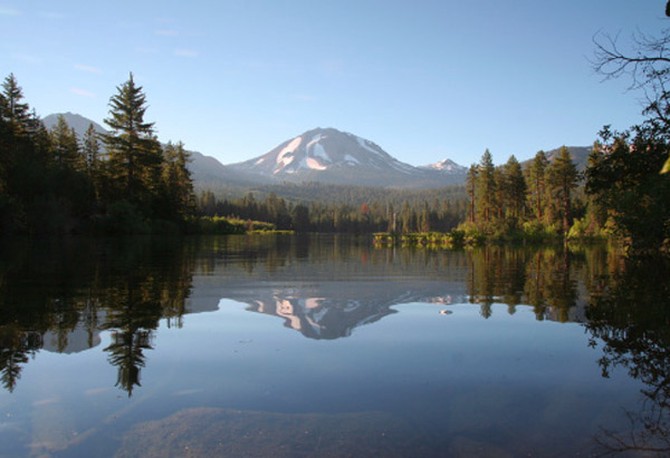 Lassen Peak
While en route to Lassen Volcanic National Park in Northern California, Cheryl learned that this hydrothermal hot spot was buried under 17 feet of snow. She opted to bypass the park and admire Lassen Peak, an active volcano that's part of the Cascade Volcanic Arc, from afar. During warmer months, this park is home to natural wonders like thumping mud pots, boiling pools and volcanic gas vents. 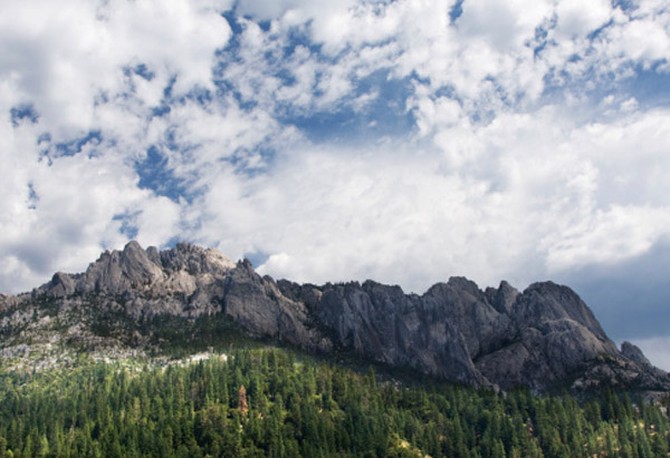 Castle Crags
From a stretch of trail in Northern California, Cheryl could see this ancient gray rock formation rising “cathedral-like” above the trees. Today, the Castle Crags State Park campground is closed, but the views remain unchanged. 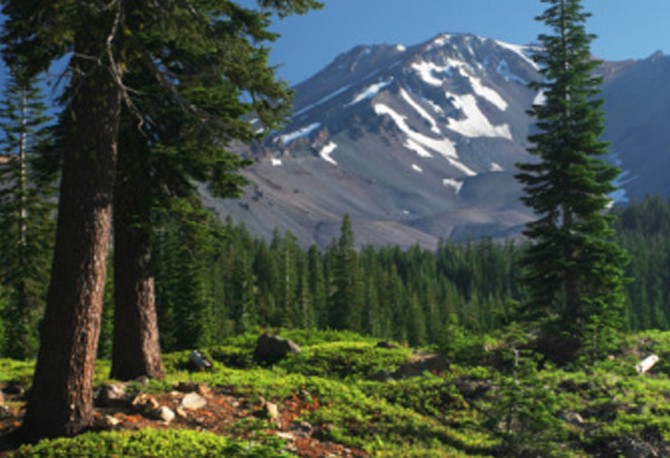 Mount Shasta
This grand California stratovolcano rises more than 14,000 feet into the air, making it the second-highest peak in the Cascade Range. Though there's always threat of eruption, the last reported lava flow occurred in 1786.

Mount McLoughlin
Rising high above the PCT, this dormant volcano in southern Oregon was once called Mount Pitt. In the early 1900s, it was renamed in honor of John McLoughlin, an influential fur trader who helped settle the Pacific Northwest. 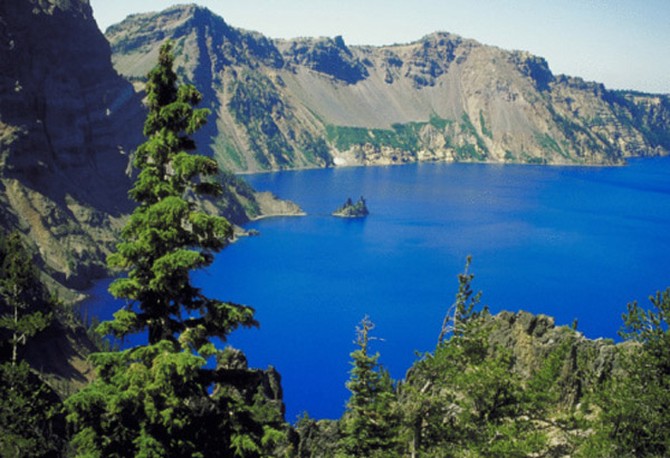 Crater Lake National Park
Cheryl writes that her first sight of Oregon's Crater Lake was one of disbelief. The lake, which is ringed by towering cliffs and considered sacred by some Native Americans, is so deep and pure, the color is intensely blue. The depths absorb almost all natural light, making this wonder look like a pool of ink. Wizard Island, a small volcano named for its resemblance to a witch's hat, rises out of the lake.

Mount Jefferson
In western Oregon, Cheryl was struck by the "dark and stately summit" of Mount Jefferson, the state's second-highest peak. In the early 1800s, historic trailblazers Meriwether Lewis and William Clark named this peak after President Thomas Jefferson. 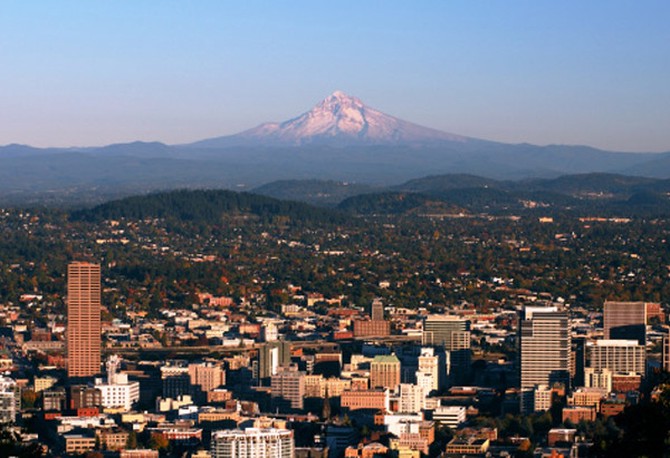 Portland and Mount Hood
Cheryl writes that, from afar, the sight of Mount Hood had never failed to take her breath away. This volcanic beauty looms large over Portland, Oregon, and is the highest mountain in the state. According to National Geographic, Mount Hood is the second-most climbed mountain in the world, ranking just below Japan's Mount Fuji.

Hikers who climb to the 6,000-feet mark can rest their feet at Timberline Lodge, a National Historic Landmark built during the Great Depression. 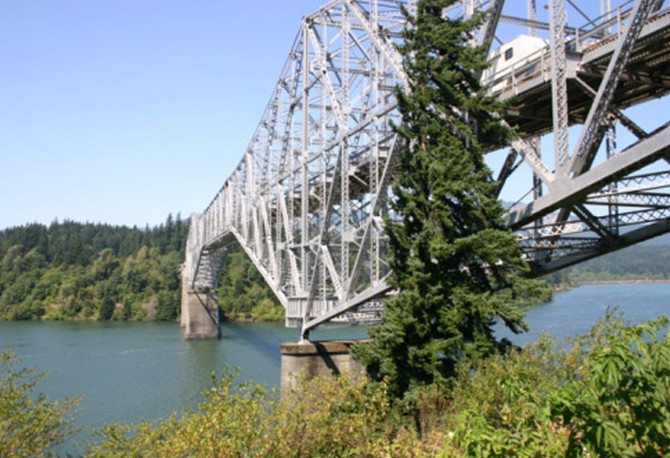 Bridge of the Gods
At the end of her 1,100-mile journey, Cheryl arrived at the Bridge of the Gods, a steel structure that spans the Columbia River, connecting Oregon and Washington. Legend has it that long before a man-made crossing was built, a great landslide formed a stone bridge in this very spot. Nearby, hikers can find sweet escape at East Wind Drive-In, a mom-and-pop spot known for its towering soft-serve ice cream cones.
Published 06/01/2012
More Books
Wild Reading Digest
7 Things That Didn't Make It into Wild
Ask Oprah or Cheryl Strayed a Question About Wild
Oprah's Favorite Lines from Wild
Oprah's Favorite Passages from Ruby
Join the Conversation: Oprah's Book Club 2.0
The Sun Does Shine Reading Guide
Oprah Talks to Behold the Dreamers Author Imbolo Mbue