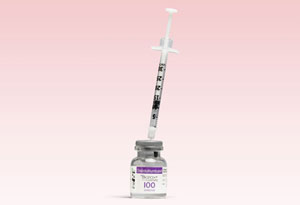 Photo: Jim Fiscus
PAGE 9
All I could think about was what could go wrong: a droopy eyelid, a permanent expression of extreme surprise or beetle-browed consternation. That's why I'd never tried Botox, the botulinum toxin that's used to reduce facial wrinkling. Also: I was philosophically opposed to shooting anything into my face. "I love my face," I'd declare to anyone who suggested I might enjoy a light arpeggio of cosmetic fiddling.

Then one morning I looked in the mirror and noticed (I thought) that the little lines between my eyebrows had deepened. I could see where my face was going, but I liked it where it was. So I made an appointment with New York City dermatologist Cheryl Karcher, MD, to ask her whether she thought I might benefit from just the teeniest grace note of Botox. At her office a few days later, I sat under a very bright light and pointed to my concerns. "Ha! Easy to fix," she said. Then she took a step back and looked at me studiously. "Big frown," she said. I made a doleful face. "Okay," she said. "Relax." And before I knew it, she had administered five quick shots of Botox above and between my eyebrows. "Fini!" said the doctor. A physician's assistant held an ice pack to my forehead to prevent bruising. "Bravo!" I said.

It took about a week for me to get used to not being able to wiggle my eyebrows the way I used to. ("Wiggle my eyebrows" doesn't adequately describe what I could do; if there is such a thing as double-jointed eyebrows, I had them. But I don't have them anymore, at least till the toxin wears off in a few months.) I don't like the paralyzed feeling at all; it's as if I'm wearing a cap that fits too tightly around my forehead. But recently a friend said to me, "What's going on with you? You look...bright-eyed and rested!"

So despite the unpleasantness, I'm afraid I'm hooked: An encore is definitely on the program. — VM

Age spots? lines? dullness? Here's how pricey treatments stack up against over-the-counter treatments
From the June 2010 issue of O, The Oprah Magazine
As a reminder, always consult your doctor for medical advice and treatment before starting any program.