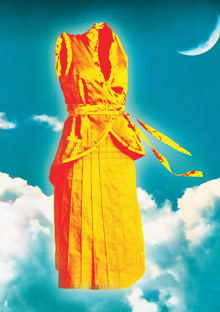 Illustration: Sean McCabe
Brain researchers are demystifying the weirdest phenomena.
Science has long sneered at so-called extrasensory phenomena like déjà vu, near-death experiences, and other out-of-body episodes. But the dismissive attitude is changing as top researchers take interest in these strange events and suggest that they're likely caused by basic mechanisms of human physiology, rather than being evidence of reincarnation or some larger spiritual domain. "There is no reason to believe that any aspect of the mental process is produced by anything but the brain," says Nobel Prize–winning neuroscientist Eric Kandel, MD, director of the Kavli Institute for Brain Science at Columbia University and author of In Search of Memory: The Emergence of a New Science of Mind. "We have ample evidence to show that these apparently paranormal phenomena are brain derived." For example...

Déjà Vu ("Already Seen")
A key to this uncanny sense of having previously encountered an event or scenario may have been discovered by researchers at the Massachusetts Institute of Technology's Picower Institute for Learning and Memory. For a recent study published in Science, they genetically engineered mice to lack a component of memory called pattern separation—the brain's ability to delineate between very similar or closely related experiences. Thanks to pattern separation, "you can have dinner at a restaurant with the same group of friends on two nights, and remember them as two distinct experiences based on small differences—the topic of conversation, the table you sat at, the entrée you chose," explains lead author Thomas McHugh, PhD. As he and his colleagues expected, their mice had problems distinguishing subtly dissimilar contexts. "It occurred to us," says McHugh, "that déjà vu in humans could at least partially be explained by a failure of the pattern separation circuit—the misattribution of a new experience to a previously stored episode." The eeriness, he adds, comes from the fact that another part of the brain is telling you, "This feeling of familiarity? It's actually not true at all."

Out-of-Body Experience
An explanation for the ethereal sense of leaving your body and seeing it from afar came to Swiss neuroscientists while treating epileptic patients requiring surgery to remove seizure-causing scar tissue. The pre-op procedure requires applying small currents to the temporal parietal junction (TPJ) of the brain while the patient is awake. "This is what we were doing when by chance we were able to repeatedly induce out-of-body experiences," says Olaf Blanke, MD, PhD, a neurologist at the Swiss Federal Institute of Technology and the University Hospital of Geneva and lead author of resulting studies published in journals like Brain. The TPJ helps synthesize body-related information from various parts of the brain, so you register one hand instead of three when you see your left hand (with your visual brain), feel it move (via the motor cortex), and hear the fingers snap (auditory brain). In addition, the TPJ is part of the larger vestibular system, which clues you in to where you're located in the surrounding space; its dysfunction, suggests Blanke, could be responsible for the experience of feeling as though you're hovering above yourself in a hospital room. "We believe it's when something goes wrong with the integration of these pieces of information—visual, proprioceptive, tactile, and vestibular—that the out-of-body experience occurs," he says. In addition to epilepsy patients, migraine sufferers and marijuana smokers seem to be particularly prone to out-of-body experiences.

Near-Death Experience (NDE)
The extraordinary white light, the euphoric peace, the visions of life going by in review—accounts by people who narrowly survive a deadly event such as a car crash or heart attack are hauntingly similar. And for many people, NDEs are evidence of the existence of the soul. Kevin R. Nelson, MD, professor of neurology at the University of Kentucky, however, has another theory that could explain at least some of the elements. When blood stops flowing to the retina, he says, vision darkens and creates a tunnel-like effect; with further blood deprivation, the retina fails, leaving you in total darkness. At this point, he speculates, the visual system of the brain may kick in to create that awesome sensation of light, while a dreamlike state arises to form images. "We're activating dream machinery while still conscious," he says, which could produce the seemingly mystical experience of an NDE. This infiltration of light and dreaming—or aspects of it—into an awake state is called REM intrusion and can be triggered by physiologic stress. Working off the hunch that some people's arousal systems are more prone to it than others, Nelson found that REM intrusion episodes indeed were much more common in the lives of 55 subjects who reported NDEs than in a control group. "My findings are spiritually neutral," he's quick to note. "Even the best scientific explanation doesn't explain away the existence of a spiritual life."
From the December 2007 issue of O, The Oprah Magazine
As a reminder, always consult your doctor for medical advice and treatment before starting any program.

More O Magazine
Head Trip: Why Your Memory May Be Slipping
The Amazing Brain: What Sets Humans Apart
Reducing Your Risk of Alzheimer's
Hope for the Scatterbrain
A Light in the Darkness: Coping with Grief over the Holidays
What You Learn from Moving Somewhere New
Coming Soon: The 12-Day Give-O-Way
An Ode To Black Womanhood: Poetry Inspired By Beyonce