To Stir, with Love 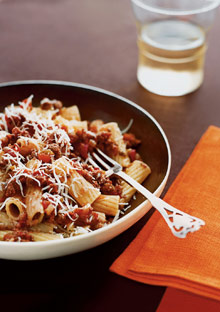 Photo: Tata Donne
Music isn't the food of love. Food is (though never, ever soup or pheasant).
A slice of bread can be sexy if it's handled right; a piece of toast, for example, and spread with pale butter and honey, and brought to you in bed by a man with whom you have just spent the night. Oysters on the half shell are seldom so potent an aphrodisiac.

All too often, people confuse romantic food with elaborate food, and believe that only money, sweat, and four-star culinary skills can produce a meal good enough to win someone's heart. But romance is a delicate thing, as easily ruined by too much effort as it is by too little.

I have overreached on countless occasions. I once roasted a pheasant for a man I was greedily and desperately in love with. The bird came out of the oven tough as an old crow, and I cried through dinner, convinced that our relationship was doomed. (It was, but not because of my cooking.) Another time, I burned my fingers trying to make tortillas for a boyfriend who had to be somewhere else that evening and ate impatiently and distractedly while I dunked my singed hands in ice water.

The fact is that if someone is madly in love with you, you can serve him almost anything and he will lap it up like a cat, purring all the while. And if he isn't, no filet mignon will change his mind.

But what about the man who is not sure yet, who thinks he might be falling for you but still has one foot on the brakes? He is the one who needs seducing. And not just into bed, either—most men I know need very little arm-twisting in that department; a bucket of day-old KFC would be sufficient foreplay. No, you are only going to bother cooking a nice, romantic meal for a man who's worth hanging on to for more than one night. And that's where things get complicated, because your goal is a very subtle one: You want it to occur to him—as if by chance, as if he just happened to think of it himself—that when he's with you, everything tastes a little better; that being with you is like visiting a land where life is brighter, easier, and just a bit exotic, and to which he might want to consider relocating permanently someday.

You need to make a meal, in other words, that will leave him hungry not for sex but for you.

If only there were a single, surefire recipe. But food is a deeply personal thing, and the first home-cooked meal you prepare for a man is, among other things, a key to your idiosyncrasies, and a map to the kind of relationship you want to be in. If you serve your grandmother's brisket, for example, it sends a message that you are thoroughly wrapped up in your own family and would like him to become enmeshed in it too. If you serve something challenging like calves brains, it announces that you plan to change him—or else. If you serve pheasant...well, let's just agree that you should not, under any circumstances, serve pheasant.

Indeed, there is only one thing I know of that can kill a budding relationship faster than pheasant, and that is soup. Many years ago, I developed a woozy kind of crush on a man who worked in the office next door. He had his eye on me, too, and one night, wonder of wonders, he invited me to a show. The following week we went to a movie. After that, he took me out to dinner, and the very next night, to another, nicer dinner. Everything was progressing swimmingly: The evenings ended with kisses that grew in duration and passion, but nothing more.

A few days later, he called. I was home, making soup. He missed me, he said, and wanted to see me—right away, please, and was I free? I said, "Sure, come on over; I'm cooking dinner." I had a feeling after we hung up that this was it: Things were about to heat up. I was excited, scared, happy. I showered, brushed my hair, and put on lip gloss. I made myself look nice, in an offhand, sexily-at-home sort of way.


And then he sniffed the air. "What are you making?" he asked.

"Huh," he said, a scowl creeping across his face. "What kind?"

"Vegetable?" I said, starting to feel the evening sinking away. "It's good. Really. You'll like it."

"Uh, okay," he said. He ate the soup quickly and did not have seconds. Our conversation was terse and awkward. He left shortly after dinner. A few days later, he called and left a message on my answering machine. "Look," he said, "I like you and everything, I do. But I think you're more serious about me than I am about you. I mean, I'm not ready to get into a committed relationship just yet, and, um, so, well...thanks for everything! Oh, yeah, and thanks for dinner the other night. See you around."

For a moment, I debated calling him back and shouting: "It was just soup ! It didn't mean anything!" But I was too irritated to bother. Besides, it did mean something. Food always does. In this case, it meant (to him, anyway) that I was auditioning for the role of Mom. He wasn't interested.

Fortunately, I began to wise up. For one thing, I got to know my neighbors Julie and Kevin. Julie was achingly beautiful, and Kevin was the lead singer in a rock 'n' roll band. One afternoon, I stopped by their apartment on my way home from work and found Julie standing over her stove, cooking something that smelled better than anything I'd ever smelled before. She told me it was Bolognese sauce , and that she made it only once a year, for Kevin's birthday. "It takes a whole day to cook," she said. "He gets it only on special occasions."

Just then Kevin burst through the door looking ravenous, eyeing the sauce, eyeing Julie. I quickly excused myself, but not before coming to two important conclusions: one, that I would learn to make Bolognese sauce, and two, that I would find a man worth cooking it for, preferably in that order.

And, lo and behold, I did. Peter and I were barely an hour into our first date when I realized that he might warrant a day at the stove. But there was no hurry. No, I was going to wait, take it easy, order takeout. In fact, the first home-cooked meal we ate was made not by me but by him, on the tiny stove in his 400-square-foot apartment.

Still I bided my time. We ate bread and cheese and apricots in bed in the middle of the night. We ate eggs in the morning, or toast with butter and honey. Summer turned to fall and the weather grew cool. At last, one bright morning I took down my cutting board and began to cut some onions. I chopped two carrots in tiny pieces, and two stalks of celery just the same. I put them in my heavy, red Dutch oven and lit the stove. The Bolognese was underway. All day it simmered, filling the apartment with its warm, rich aroma. At 7 o'clock, Peter whistled up to me from the park across the street. I waved to him out my kitchen window.

"Wow," he said, coming through the door a minute later. "It smells amazing in here. What's for dinner?"

I shrugged. "Pasta," I said casually. He looked at me sideways, as if to say, "Hey, wait a minute—pasta never smelled like this back on my planet." I just smiled mysteriously, set the table, tossed the salad. And then we sat down to the dinner that I had made just for him—just for us—and I don't remember a single bite of it. I am certain, however, that it was delicious. Of course it was. We had fallen in love.

From the February 2007 issue of O, The Oprah Magazine