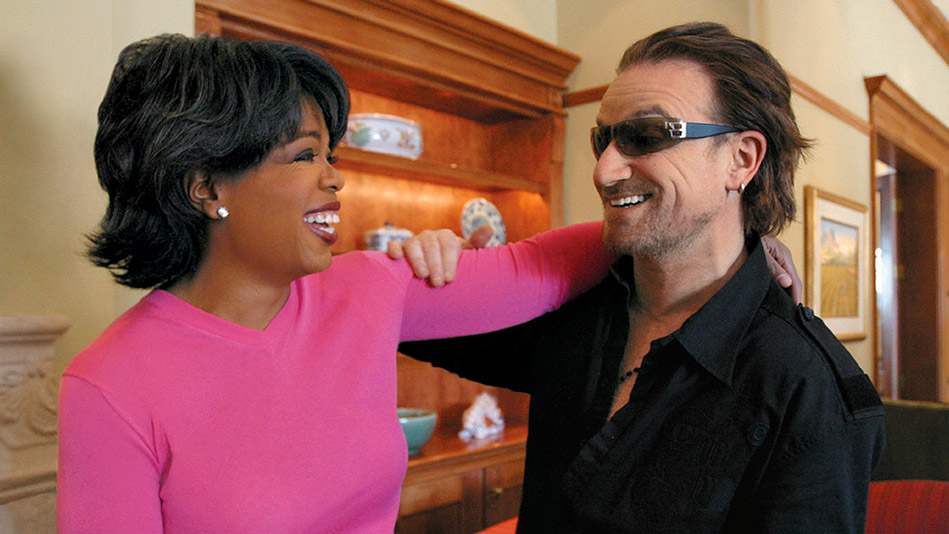 Oprah: So would you stop first?

Bono: Yes. Our idea in the band is this: Two crap albums in a row and you're out. That gives us two to go. One crap album is fine, because you can pull back and try again. But after two, you're forever "interesting."

Oprah: I was watching you up onstage last night, and I said, God, this just makes me want to go put on a pair of sunglasses and a leather jacket. Is there anything better than being on that stage in that moment and being you?

Bono: Wow—I don't remember feeling that good. You certainly have moments when the music dwarfs you, brings you to your knees and you're only a tiny part of it. But most of the time, unfortunately, you're a very large part of it. And you're self-conscious, or something's irritating you or you're under-rehearsed. So, yes, there are moments like last night when we're standing out there singing a melody—"It's a long, long walk to freedom"—and the crowd starts singing with us, though they've never heard the song before. I had just watched this extraordinary man, Nelson Mandela, who taught us all a lesson, take that long walk to the podium. As everyone sang, I realized we were guests of the nation of South Africa. They were singing the hymn, he was smiling to the crowd—and we were in between.

Oprah: I felt that, too.

Bono: It was even more poignant because it was a predominantly white audience singing to him. I'm standing there thinking, this might be a big miracle we're witnessing.

Oprah: The sea of white faces, singing that song to him.

Bono: And there was no patronizing from either side.

Oprah: I agree. I was happy to be a witness to it.

Bono: I was pretty knocked out. I wished my entire band were there. With the band, we would have pulled that house down, because there was a lot of energy in that crowd.

Oprah: So when do you really have a good time?

Bono: When I'm playing with the band. As a soloist, I'm average at best. But with the band? There's nothing better, I promise you. I'm sorry, but I can say that. Two weekends ago, I was in New York with my wife, and we had a great time. My wife and I surfed our jet lag.

Oprah: What does that mean?

Bono: When you have kids, you have to go to bed and get up at a certain time. But if you don't have the kids with you—which we didn't—you can go to bed when you're sleepy and stay up when you're not. That means you can stay out until 4 in the morning.

Oprah: I've got to learn how to surf my jet lag. How old are the kids now?

Bono: The two girls are 14 and 12; the two boys are 4 and 2. They're great. I don't know why I have the life I have. I don't deserve it. I think the family is as strong as it is because of my wife, Ali. She is just really so cool.

Oprah: How long have you been married?

Bono: Longer than I haven't been. We married when we were kids. We couldn't have known what we were getting involved in.

Oprah: And after all these years, you still think she's cool?

Bono: Oh, yeah. She's quite a character. And she has a very strong sense of herself. She's capable of extraordinary things. Right now she's working on a new way of doing business in apparel. It involves fair trade practices in which people in Third World countries get paid properly and get health insurance—and you still make a fortune. It may be one of the biggest brands in the next years, so watch out. It's called Edun.

My wife is not ambitious in any way you may be familiar with. For her, ambition is a slow kind of burning. If each partner wants the other to realize his or her potential, the relationship will probably be okay. If one has to sacrifice for the other, which is so often the case, I don't think it's as good as two people trying to outdo each other [with support]. I think she has sacrificed more than I have, so I'm trying to balance that now.

Oprah: How often are you home?

Bono: I'm home a lot. Because I live in Ireland, we can live under the celebrity radar. I might go missing for a whole year. As it happens, that might have been the last couple of years. You may get the impression I'm always out there, but I'm usually home driving my kids to school. I like morning better than night.

Oprah: I thought all musicians kept those crazy "Quincy hours"—working late at night.

Bono: I peak early in the morning. It's downhill from there.

Oprah: Are you a full participant in parenting?

Bono: Yes, except when I'm on tour. Even then I'm never away from Ali and the kids for more than three weeks.

Oprah: What have your children taught you about yourself?

Bono: I have very little memory of my childhood, so as I raise my kids the memories come back in the most bizarre ways. Like you're singing your baby a song, and you don't know why you remember it, but somehow you do. You don't even know the tune, but you sing it anyway and think, How am I singing this song?

Oprah: There's a theory that whatever stage your children are at, it reminds you of that stage of your own childhood. Like if you have a 7-year-old and something traumatic happened to you when you were 7, that's when all your stuff comes up. Has that been true for you?

Bono: I certainly thought my 20s were turbulent, but I didn't realize that the real turbulence comes later in life, when you get a chance—whether it's through your own children or others—to revisit what made you who you are.

Oprah: And brought on your rage.

Bono: Yes. I wrote a piece called "Rage Is Not a Great Reason to Do Anything, but It'll Do." It's a story of me learning to write songs as a kid. I didn't go to music school, because I wasn't from that kind of family. And I remember the frustration of hearing a melody in my head but not being able to quite put it down. So you learn to rely on other people, the band, and you start thinking that's a weakness. But it's a strength to rely on others.
From the April 2004 issue of O, The Oprah Magazine