This Is Your Life! 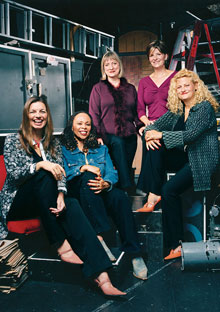 What are audiences to make of the single female figure onstage, making theater out of her hopes and dreams, her bitterest war stories, crashed love affairs, even her poems? Molly Peacock explores the intimate, entrancing lone-star state known as the one-woman show.
Every woman I know has a one-woman show in her, a part of her life she would love to have onstage. It could be the romantic part or the most painful part—it doesn't matter. What matters is the impulse in each of us to lean forward and say, "Whew, could I tell you a story."

Three women—a jazz singer, a cartoonist, and a poet—are trying to figure out exactly how to do just that. At 50, 48, and 58, and already well known in their own fields, they are venturing into theater for the first time, crossing over to a brand-new art form to refresh their lives. I know the first two because I'm a fan of their work: the zesty Canadian jazz singer Denise Pelley and the beloved New Yorker cartoonist Victoria Roberts. The third one, the poet, is me. We began these ventures with the encouragement of two dauntless younger women from London, Ontario: Louise Fagan, 40, and Jacquie Gauthier, 42, who are the driving forces behind Femme Fatale Theatre Productions. The warmhearted, statuesque Fagan, a theater director and music producer, and the vivacious Gauthier, a radio host and writer, created Femme Fatale on a handshake only a year and a half ago, but with great style and energy they're already on their way to realizing Fagan's idea of a minifestival of one-woman shows that will tour North America. Femme Fatale took our three shows to the National Museum of Women in the Arts in Washington, D.C., last fall, and to an off-Broadway run at Urban Stages in New York City from February 13 to 26, before heading off to other cities.
From the February 2006 issue of O, The Oprah Magazine

More O Magazine
10 Terrific Reads of 2010
10 More Great Reads to Pick Up in April
What You Learn from Moving Somewhere New
Coming Soon: The 12-Day Give-O-Way
An Ode To Black Womanhood: Poetry Inspired By Beyonce
3 Delicious Meals That Include Chocolate
6 Incredible National Parks You Have to Visit
3 Delicious Ways to Cook Bacon for Dinner