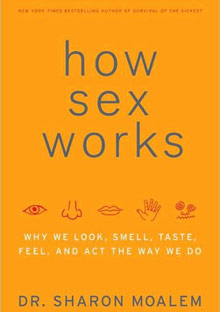 Packed with trivia about the evolutionary history, intricate mechanics, and nitty-gritty mysteries of sex, sexual organs, and desire, Sharon Moalem's How Sex Works manages to inject science writing with the prurient thrill of a gossip rag. Here's a taste:

We like "va-jay-jay," of course:...and "hoo ha" and "honey pot" aren't bad, either. They certainly improve on the 19th-century pet name for the vagina, the "upright grin." But we vote for the revival of the late-1500s slang of choice, "hey nonny-no."

I only have eyes for you... and you: Ovulation, when female fertility is at its peak, is also the time of the month when women are more likely to fantasize about men who aren't their partners. If a woman does have sex with more than one man during ovulation, there's a chance that her wandering eye could lead to fraternal twins with different dads. One study suggested that one in 400 pairs of fraternal twins shares a mom but not a dad.

From the May 2009 issue of O, The Oprah Magazine

More O Magazine
10 Books to Read Right Now
10 More Great Reads to Pick Up in April
What Oprah Knows for Sure About Real Power
Jackie O.: A Life in Books
What's Timing Got to Do with It?
9 Important Financial Moves All Couples Should Make
How to Overcome Your Fear of Intimacy
7 Books to Watch for in June 2010