We may think there's an art to drinking, but it's actually more of a science. Here are a few things that even the most responsible among us get wrong.
By Corrie Pikul 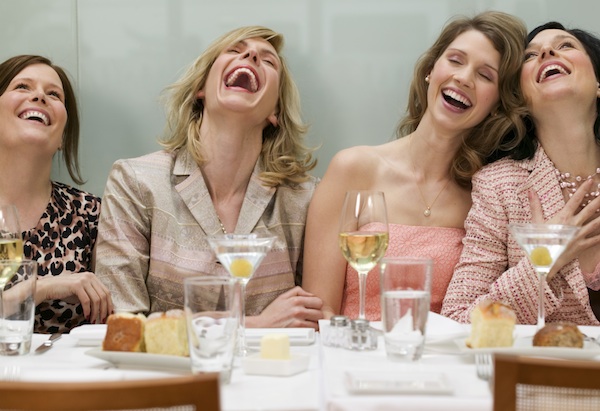 
You know how to have your passion-pom-pom-tini and drink it, too—with diet mixers that have a fraction of the calories of the sugary stuff. But that "lite" cocktail packs a sneaky punch: A recent study from Northern Kentucky University found that men and women who drank vodka mixed with artificially sweetened mixers had higher breath-alcohol concentrations (about 18 percent higher) than those who drank the same amount of vodka with regular soda. It's not that the fake sugar speeds up the rate of alcohol absorption, explains Dennis Thombs, PhD, from the University of North Texas, whose research has shown similar results. "Instead, it 'allows' the alcohol to be absorbed at a normal rate—as if the mixer is simply water," he says. Sugar-based mixers like soda and juice slow alcohol absorption. So while that diet cocktail won't go straight to your hips, it may go straight to your head.

They "get happy" on the weekends.


Seven: That's the maximum recommended number of weekly drinks for women. Happily, it's the number of drinks you have in a typical week (when it's not vacation, holiday season, BBQ season, wedding season or friends-in-town season, of course). Unhappily, you’re packing them in over 72 hours (i.e., three cocktails at happy hour on Friday, one at brunch Saturday and three at a party on Saturday night). Turns out, it's better for our bodies to spread those seven drinks out over the course of a week, says Joseph Nowinski, PhD, a clinical psychologist affiliated with the University of Connecticut, and the author of Almost Alcoholic. One drink a day—or night—gives your liver ample time to neutralize any toxins, he says. When you have three or more in a row, multiple days in a row, your body may struggle to process the alcohol, and that type of overload has been shown to elevate the risk for colon, breast and liver cancer as well as diabetes.

Next: The times women tend to drink more

They keep their first-aid kit stocked with...


An emergency bottle of merlot. Studies have found that women are more likely to drink more than they want or plan to when they're feeling sad, anxious or stressed, says Debi Anne LaPlante, PhD, an assistant professor at Harvard Medical School and the author of the medical guide Responsible Drinking for Women. Men, on the other hand, tend to drink too much because of peer pressure. While guys can plan to stay away from sports bars, clubs, BBQs and other situations where they'll be tempted to down a few beers, it's harder for women to avoid their most powerful triggers. After enduring a hair-raising day or hearing upsetting news, pull out a yoga DVD instead of a wine glass. Research suggests yoga can boost your mood—and perhaps reduce the need for that liquid SOS.

They go outside and come back smelling of mints.


You only smoke when you drink, but that might just be one of the worst times. Not only does the nicotine make you crave more alcohol (and the effect can last for hours after you stub out your cigarette), but new research from Brown University shows that smoking while drinking makes you more likely to wake up with a terrible hangover. While the throbbing headache is temporary, other effects of this pairing are more troublesome, especially if you're a regular drinker. A study published in the British Journal of Psychiatry found that those who drank heavily and smoked had a 36 percent faster cognitive decline compared with those who drank moderately and didn't smoke at all. (After 10 years, the brains of the heavy-drinking smokers had aged the equivalent of 12 years, and the researchers concluded that it was the combination of the two vices that was accelerating the aging process.)

Next: Why women tend to feel the affects of alcohol quicker than men

They split a bottle of wine with their husband—50/50.


Women usually feel intoxicated more quickly than men. And that's not because they're smaller or slimmer or less tough or less "experienced" with drinking. Men's bodies have a higher percentage of liquid than women's bodies, Nowinski says, so there's more fluid in which to dilute the alcohol. On the other hand, women's bodies naturally have a higher percentage of fat, which absorbs the alcohol but doesn't dilute it or help process it. On top of all of that, women have lower levels of two key enzymes that break down alcohol in the stomach and liver. So when you drink the same amount as a guy, you absorb more alcohol into your bloodstream and it stays in your system longer, exposing your brain and other organs to alcohol's toxic byproducts, and putting you at higher risk for liver disease, heart damage and brain damage.

They try to cure the hangover before it's begun.


Why wait until the headache? That's the logic behind your before-bed acetaminophen habit. But acetaminophen and alcohol just don't mix: Studies have shown that combining the two, even at low levels, can increase your risk of kidney disease (here's more info about how this works). For a better hangover-insurance plan, try one of these strategies.