The Eggplant and I 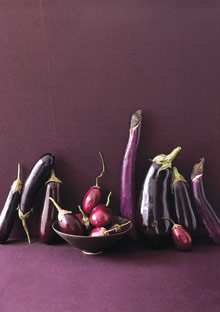 Photo: Sang An
Seedy, mushy, altogether bizarre-looking, her mother's food crush was utterly inexplicable...until one day, it wasn't.
Can privacy come in a can? No, it's not the beginning of a prank phone call—it's a question about my mother, the lovely, cheerful English mum of my childhood who, twice a year or so, opened a small tin of Progresso Eggplant Caponata and ate it, standing at our kitchen counter. We children looked on from the table in horror, forking up our early dinner of pork chops and buttered noodles as our mother disappeared. Bug-eyed from TV, I could practically see the wavy lines around her, the shimmer that tells you a person—at least a seventies sitcom one—is receding into memory or daydream. She spooned the inky, oily Italian relish onto a cracker, chewed it, and looked out the window, lost in thought. Or maybe found.

As far as I was concerned, eggplant didn't deserve to be in the house at all, let alone anywhere near my mother's pretty mouth. "I hate that," I said, and she turned her face toward us and smiled. "Why are you even eating it?" I asked, and she laughed: "Because I like it." In a world of domestic attentiveness, this little treat was a quiet assertion of her difference from us. Sure, she still looked like our gracious mother, ours, the one who pinned her silky-dark hair into a neat chignon before proceeding to soft boil our eggs and slice toast into "fingers" for dipping—but who was she?

It's the same way I felt looking at her honeymoon photos: There sat my mother, in her clingy, lacy nightgown, sticking a spoon into her room-service grapefruit and smiling at the camera—at our dad— in a way I didn't recognize. What about us kids? Where were we?

Inside a box of snapshots, inside the happy, demanding tumult of a family, the slightest separations can still make themselves felt. Privacy is possible, it turns out, even when you're never alone. If, back then, my mother could have popped in a yoga DVD or snuck into the study to Google her high school boyfriend, maybe she wouldn't have chosen the particular retreat of a tinned appetizer. Those bites of eggplant were one way for her to create something, in the middle of everything, that was hers alone.

Because I was a weird kid—the kind who read Red Cross manuals cover to cover, as if they were novels about shock and resuscitation—I understood. At least, I understood about tunneling hollows of personal space out from the thickness of family life, even if I didn't understand the lure of eggplant itself.

My dislike of the plant ran deep. And not because I once embarrassingly confused auberge with aubergine in a French assignment, and ended up writing an inadvertently peculiar story about a family who housed guests in a small but charming eggplant (Trés originale! Madame Spodheim had praised in her spidery cursive). It was just something about its sponginess under my molars, something about its bitterness that gave me a bad feeling. In high school, I'd feel vindicated when I found out it was a member of the deadly nightshade family. And during college, I'd be almost joyful when I read a recipe that urged, "Salt the eggplant heavily to sweat out the poisons." I'd walk around for days, repeating it: "Sweat out the poisons! Not exactly a ringing endorsement." But back there at the kitchen table, eggplant was one way that I, a scabby-kneed and pigtailed little girl, was different from my mother. "Maybe it'll grow on you," she teased while I hung around watching her spoon summer ratatouille into freezer bags. And I'd say, "Yeah, like a fungus."


But she was right. First there was the addictive pizza topped with slices as crisp as schnitzel and scarfed down in a college dorm room, later a green Thai curry fragrant with basil and shared with the love of my life, three blocks from our first apartment. When a Moroccan friend diced it, fried it with cumin, and marinated it overnight with tomatoes and oil, I scooped it up with wheaty crackers and thought about it for days. There was even a silky, piquant restaurant version of the canned relish my mother had been eating all those years earlier. And last summer there was baba ghanoush at a party. Transported mouthward with pita bread, the Middle Eastern puree was so unctuous and smoky, so rich and irresistible, that I vowed to recreate it.

At home, Ben, my 6-year-old, stood around squeezing lemons into a measuring cup for me, shuddering as I left the roasted eggplant to drain in the sink, pockets of slidy, dark seeds emerging from the tangle of pulp and charred skin. I was glad he'd never seen any of the Alien movies. But his wariness dissipated as the food processor whirred it from incoherent to creamy and pale green with the herbs we'd tossed in. We rippled it into a pretty dish, and he looked from the bowl to me and back before dipping the very corner of a pita chip in, before announcing, "Yikes! It makes my lips itch," before taking another pita chip and not dipping this time so much as shoveling. "I don't know," he kept saying, even as the eggplant disappeared from view. "I'm not sure."

Eggplant, it seems, will not be an assertion of my otherness from my family, an edible version of daydreaming during a holiday meal. I'll get no privacy in a can. But I thought of my mom again recently when Ben staggered from sleep into the bathroom where I was lying in the dark, in the tub, a single candle aflame on its rim. His own cheerful, dark-haired mother. He was shocked. "But I'm not even awake !" he insisted. "Why are you doing this without me?" And, like my mother before me, I could only smile.

Get the recipe for Minted Baba Ghanoush

From the June 2006 issue of O, The Oprah Magazine