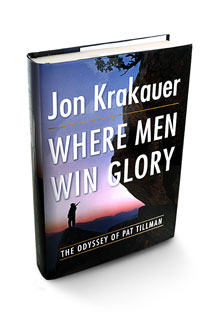 Talk about an inspired pairing of subject and author: Jon Krakauer is the exhaustive chronicler of the lives of brave American iconoclasts ( Into Thin Air, Into the Wild ); Pat Tillman was the pro football player who joined the army after 9/11, only to die two years later in Afghanistan, a victim of "friendly fire." Where Men Win Glory , Krakauer's account of Tillman's life—and of the way the Bush administration tried to turn Tillman's story into pro-war propaganda—is both meticulous and passionate, and reveals a far more complex and emotional character than the mythical American "hero."

From the December 2009 issue of O, The Oprah Magazine

More O Magazine
A Light in the Darkness: Coping with Grief over the Holidays
A Gift-Free Christmas
Mini-Memoirs: Your Life Story in Six Words
Toni Morrison: The Precious Moments a Writer Lives For
Know When to Fold 'Em
Comfort Food: What to Eat When the Going Gets Tough
How Long Will Food Keep in the Freezer?
9 Small Financial Steps That Will Pay Off Big in the Future