Books That Made a Difference to Sarah Vowell 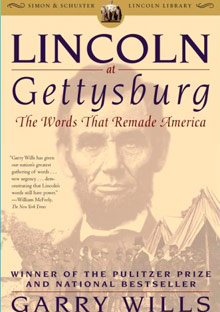 Lingering over the Gettysburg Address, Wills fleshes out Abraham Lincoln as a thinker, artist, politician, orator, and commander in chief. Wills is at his most riveting when he examines how Lincoln summons the Declaration of Independence, written four score and seven years earlier, to call for a "new birth of freedom" for American slaves. "The 'great task remaining' at the end of the Address," writes Wills, "is not something inferior to the great deeds of the fathers. It is the same work, always being done...."
From the March 2009 issue of O, The Oprah Magazine

More O Magazine
Who's Never Going to Let You Down?
What's on Keri Russell's Bookshelf?
Books That Made a Difference to Jon Hamm
Oprah Talks to Tina Fey
10 Terrific Reads of 2010
Is It Okay to Borrow a Friend's Prescription?
The Safest Seat in the Plane: Where to Sit in Case of a Crash
A Couples Therapist Screws Up