Mix and Match in Beverly Hills 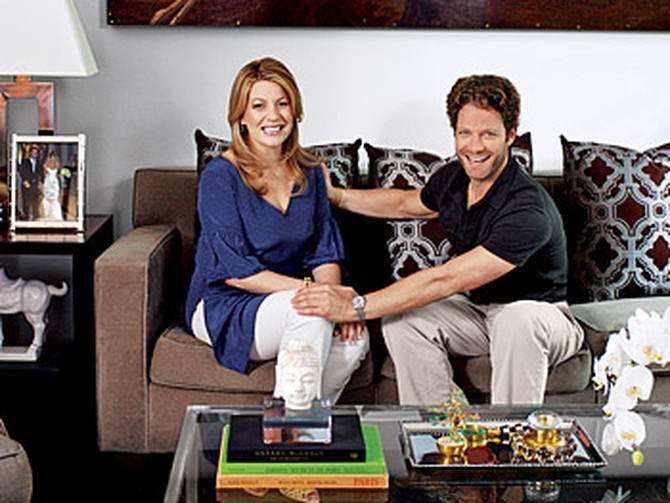 When Nate showed up on her doorstep with a big hug and the news that she was one of our contest winners, Jenn Feldman had a wave of emotions. "Gosh—this is like getting engaged!" Jenn exclaimed. "I never saw it coming." Then she promptly burst into tears and blamed it on hormones. Fair enough—she'd just given birth to her son, Sammy, three weeks earlier.

Rewind to 2005, when Jenn left New York to be with her fiancé, Todd, in Los Angeles. The couple bought a run-down condo in Beverly Hills, enabling Jenn—who had lived in rentals all her life—to finally realize her dream of renovating a home from top to bottom. She wanted to fix up the place before they moved in, so she gave herself a 30-day deadline. "I work best under pressure," she says. And she got to it, hiring a crew to lay new ebony-stained hardwood floors and repaint every surface of the apartment. 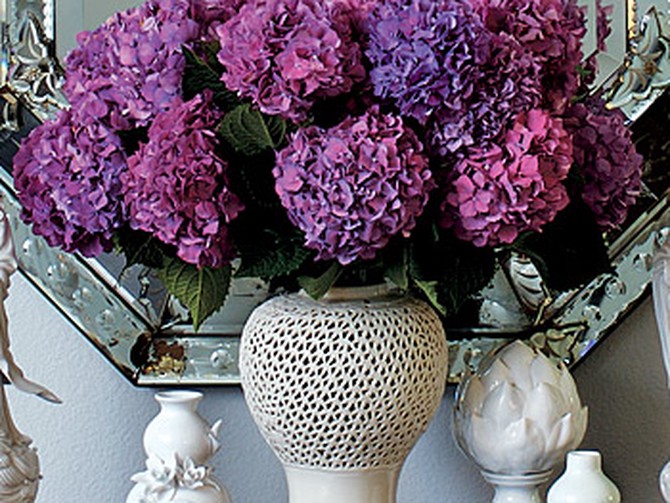 Each weekend, she'd scour the city's flea markets in search of hidden treasures, snagging a Buddha head sculpture on one visit, more glass decanters the next. "No one believes that the stuff in our house is from flea markets," Jenn says. "But I see potential in everything."

The room's mirror used to belong to her husband's grandmother. 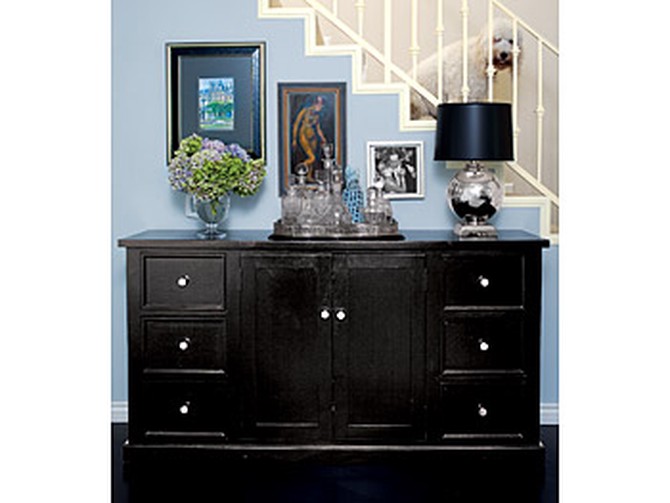 She credits her discerning eye to a creative lineage—her mother is a gardener, her great-grandmother was a painter. And her artistic background—she studied painting and photography in college. Decorating the condo, however, was about much more than creating a pretty place to live. "My husband's parents died when he was relatively young, and it had been a long time since he'd had a family home," Jenn says. "This house was monumental for us—I wanted to create an environment that reflected who we are and the new life we'd begun together."

So she filled the rooms with family photographs, heirlooms and mementos from their travels, like the black-and-white pictures of Paris they snapped on their first trip together. In selecting the furnishings and accessories, Jenn drew inspiration, as Nate put it during his visit, "from all over the world and all over the mall."

Jenn took full advantage of the odd wall space created by her stairway, hanging pictures in descending size to mirror the steps' angle.

Her diaphanous glass decanters—on her Fasano Designs buffet—look like a cohesive collection, in part because they're "framed" shoulder-to-shoulder in a tray and surrounded by breathing space. 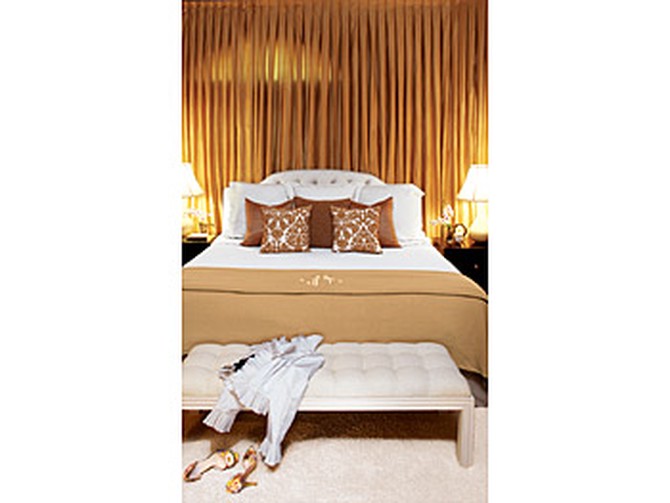 "I'm never biased," she explains. "I don't care whether something is $5 or $5,000—if it's unique and it speaks to me, that's what counts." Her home reflects this democratic attitude: In the living room, Jonathan Adler stools sit on a $98 rug from Lowe's. In the master bedroom, the plush bed is draped with a blanket from JCPenney that Jenn had monogrammed. She splurged on a large painting of an orchid by a street artist named O—which now holds pride of place in the living room—but saved on art elsewhere in her home by framing pages sliced out of botany books.

A monogram, like this one on a blanket from JCPenney, "can make anything look expensive," she says.

Rather than let an awkwardly placed window cramp the layout of her master bedroom, Jenn hung a scrim that creates the appearance of a solid wall.

The bench at the foot of her bed is a reupholstered flea market score. She found the pillows at Target and Restoration Hardware. 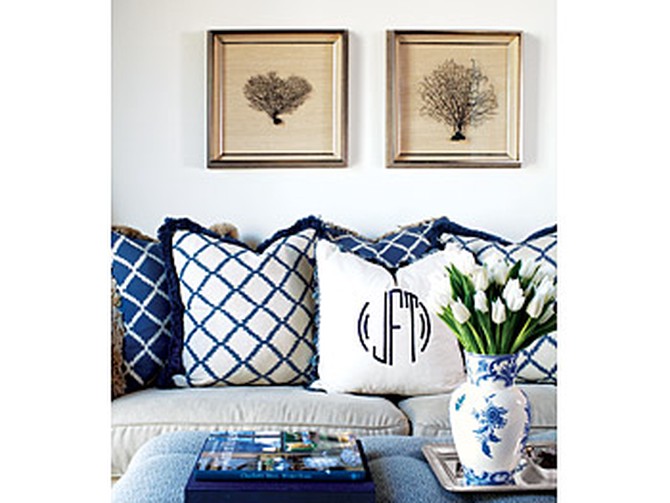 Don't skip the small stuff. Before framing these sea fans, Jenn spray-painted them navy blue to match the rest of the room. Also, establish a consistent visual rhythm by using a single fabric pattern in more than one color combination, as with these blue-and-white ikat throw pillows.

"Jenn obviously has an amazing eye for craftsmanship, and that's what pulls together her high-low approach to decorating," Nate says. "Her themes are strong and well carried through, whether it's the blue, white, and brown palette or the figurative porcelain. There's a tremendous attention to detail here, and it makes everything in Jenn's home look like a million bucks." 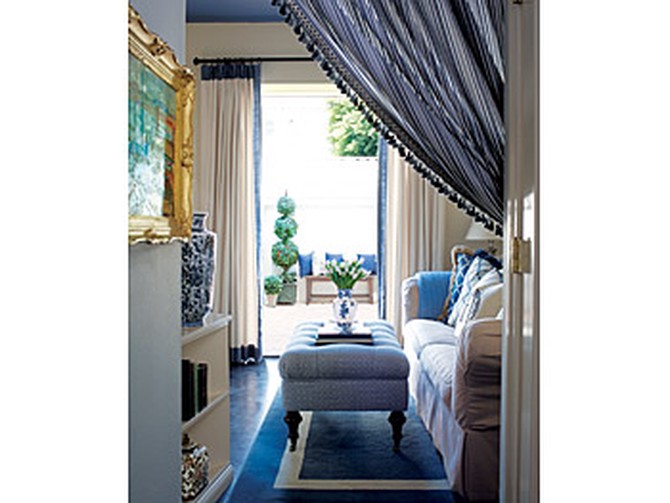 Jenn refers to her den as the Blue Room. Painting the ceiling the same color as the rug or the floor makes the room feel like an embrace. Connect indoor and outdoor spaces by using the same color scheme in both, as Jenn does here with the blues on her patio and in her den.

Different heights of similar items, such as these two blue-and-white china vases, move the eye around the room.

When she doesn't need extra seating, Jenn adds a vase- and beverage-steadying tray to this ottoman and calls it a coffee table. 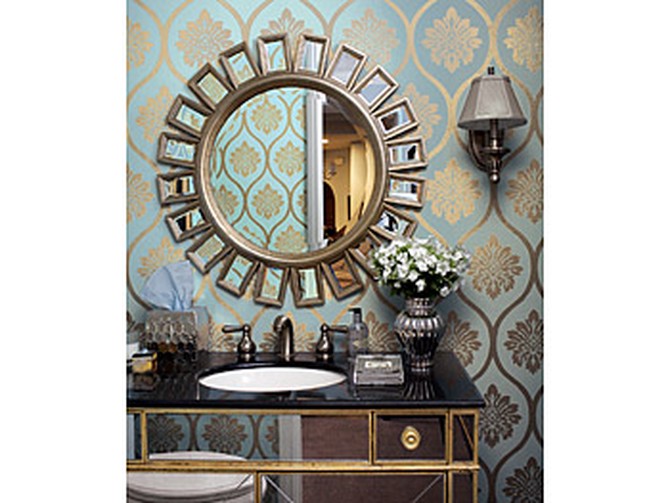 In her powder room, Jenn chose a metallic theme—carried out in the Jane Churchill wallpaper and the Z Gallerie sink, vanity and mirror. 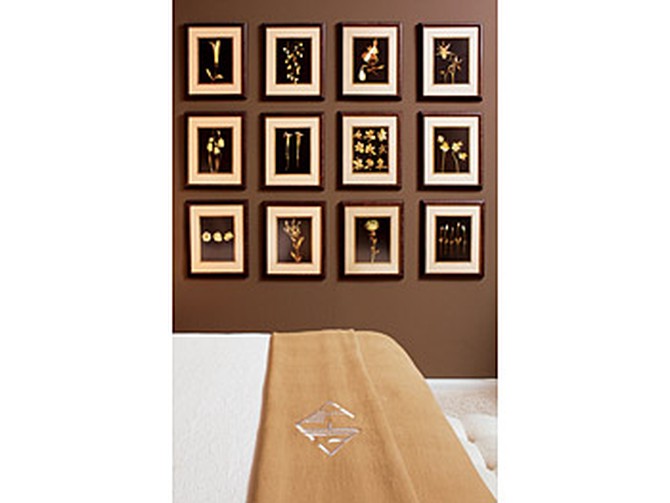 Jenn cut a dozen flower photographs out of a book and hung them in identical frames to create a larger composition.

Nate admires Jenn's gutsy mix-and-match, high-low approach. "These rooms look like they were assembled over time," he says. "You can't create a house like this in a day." But if you're Jenn Feldman, you can—somewhat miraculously, and with much gusto—do it in a month.

More with other O at Home contest winners…

From the Winter 2007 issue of O, The Oprah Magazine
More Home
Overcoming Decorating Paralysis
Suffering from Decorating Anxiety? Stop Fussing and Start Enjoying
How to Cure Your Clutter Problem
Make Your Home Renovation Pay Off
Martha Beck Rescues You from Holiday Houseguest Hell
How to Make Your Guests Feel at Home
One Hour, One Day, One Weekend
5 Dishes for a Memorable Brunch