The Art of Perfect Timing

You have a great idea for a business (a year too early). You meet Mr. Right (the day after his wedding). If you feel you just can't beat the clock, Martha Beck can help you make things happen at the exact right moment.
By Martha Beck 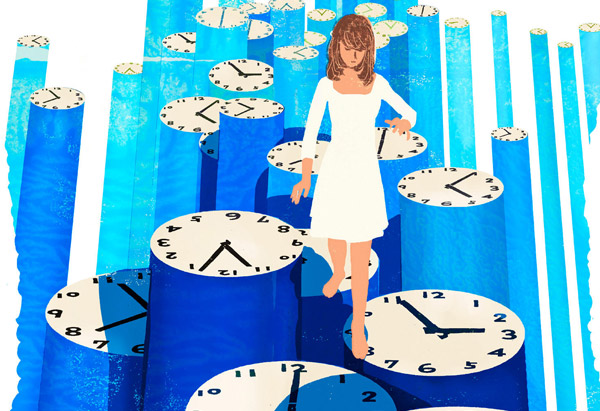 Illustration: Tatsuro Kiuchi
My timing stinks!" my friend Jackie moaned. "I always do the right thing at the wrong time." It did look that way. Jackie snagged a job in banking just before the recent recession hit. Terrified she'd be fired, she worked like a mule and earned brilliant performance ratings—just before the bank failed. Jackie was jobless in the worst economic crisis since the Great Depression. She was greatly depressed.

Meanwhile, Jackie's cubicle buddy Cleo threw a party to celebrate her own layoff. "Everyone had been predicting the collapse, so in the past few months I'd been checking out other options," Cleo told me. "My cousin runs a medical clinic in rural Nepal, and I'd always wanted to volunteer there. Now I have a severance package and a clear calendar. The timing's perfect!"

There have been many times in my life (the accidental pregnancy, the chronic illness, the water-heater explosion that flooded my house on the day my real estate agent showed it to prospective buyers) when I wanted to personally cane anyone who trumpeted, "The timing's perfect!" If that were true, would scientists ever have invented Cialis, much less had to warn men about that scary four-hour maximum? I think not.

Nevertheless, I'm mellowing toward the "timing is perfect!" constituency. I've come to believe we humans possess highly sophisticated instincts to help us navigate time. Tune in to these signals, and it really does seem that everything's on schedule. Tune out, and it will appear as if you're at the none-too-tender mercy of blind luck, as poor Jackie was.

One of the things that changed my mind about timing was the recent book How We Decide, by Jonah Lehrer. The calculating part of the human brain, Lehrer writes, "is like a computer operating system that was rushed to market." It's slow, clunky, prone to errors—at least compared with the brain region associated with emotions. This highly developed area "has been exquisitely refined by evolution...so it can make fast decisions based on very little information."

For example, a baseball batter doesn't have time to think about the trajectory of a pitched ball. His swing is based on subtle clues gleaned from the pitcher's windup. He experiences this information not as thought ("This one's high and inside") but as feeling ("Danger! No!"). As Lehrer puts it, "Every feeling is really a summary of data, a visceral response to all of the information that can't be accessed directly."

Your nonverbal brain, then, is continuously registering incredibly subtle predictive clues. It communicates with your consciousness through emotions and hunches, making you uneasy when you procrastinate too long or commit too quickly. It can speed you up with anxiety or excitement, slow you down with fatigue and confusion, or help you feel balanced and relaxed.

I've found that the people I work with in my life-coaching practice possess instinctive timekeepers holding detailed plans for their futures—and that these plans often go totally unrecognized by my clients. The process on the next page is astonishingly accurate at surfacing these subconscious schedules.

Next: Testing your timekeeper
From the December 2009 issue of O, The Oprah Magazine

More Home
When You Should Hold a Grudge
How To (Finally!) Keep Your New Year's Resolutions
The 4-Step Plan to Get Your Life on Track
Inside the World of Anatomist Joy Reidenberg
How 4 Career Changers Found Their Calling
4 Mistakes Women Make at the Office
The No-Regrets Plan for Your Office Party
O's Shortcuts to Simplify Your Life