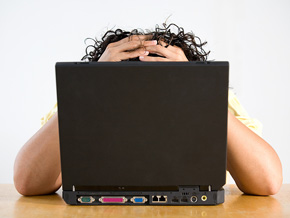 Thank you for applying for a position in "pubic relations." For the future, it's wise to have another set of eyes glance over your résumé before you submit it.

Unfortunately for one still-mortified applicant, that actually happened this spring when applying for an internship. Save yourself from becoming a cocktail party anecdote and use these dos and don'ts to create a résumé that's both powerful and professional.

Tell the whole truth about where and when you worked for an employer. This means including the specific months and years. In Ross Baltic's experience at Mercury Partners Executive Search Advisors, finding only years on an applicant's résumé raises credibility questions.

If you've had a lengthy gap between jobs, Ross suggests denoting the time as "Personal Sabbatical from June 2008 to June 2009." Even if your work during this sabbatical isn't relevant to the job you're specifically applying for, you're better off pointing it out than leaving an employer to wonder what you did during the time off.

If you've jumped from job to job, Meg Stow Crowley, a recruiter at Talent Ad Group in Houston, says it might be smart to offer an explanation at the beginning of the hiring process. Explain the circumstances: an internship, a summer job, a temp position, even a company layoff. "An HR manager is going to question you, so you might as well manage that one right out front," she says.

If you're a recent college graduate, there is less concern. Meg says employers expect short-term experiences from those just getting out of school.


Don't: Talk Yourself Up

It's not that you're not worthy of the credit, but allow your experience to speak for itself. Recently, Meg came across a résumé that was "over the top," she says, "an advertisement of himself more than what he had done for the companies."

While you should definitely note your achievements, awards you've received and milestones that set you apart, there's a difference between giving your track record and tooting your own horn. Leave the personal information out of it.

Also, keep in mind that every industry is a small one. You have no idea who a future employer may know from your old office, and you don't want to get caught fluffing up your actual responsibilities.

Do: Tailor Your Résumé to the Specific Job at Hand

Meg suggests having tailor-made versions of your résumé to fit different job positions. Essentially, tweak your past jobs to highlight the applicable experiences from each.

"I think a lot of people make a résumé and mass produce it to every job they see," Meg says. "But if your résumé doesn't have the right keywords, it's not going to get picked up."

Keywords can be especially useful on job boards, and by reading a job description, you should be able to figure out what those keywords are. Meg says employers often use the job boards before any other type of recruitment, and when this is the case, tailoring to a specific job will help your résumé float to the top in a search for qualified applicants.

Don't try to fill a page with high school activities if you don't have the work experience to back up your application. An employer will see straight through it. Instead, get involved. Use special classes and class projects to your advantage, and consider exploiting your other interests to make yourself more qualified.

"You were a teenager then, and you're an adult now. You want to add your high school graduation, but keep it in a simple section," Meg says.

Once you have real work experience, Ross says it's also time to move on from collegiate activities. Other than being an athlete, which he says shows leadership and diversity, take off college-based clubs unless they're necessary for a specific job. "If the experience is relevant and speaks to who you are as a person, by all means, keep it on. ... But there comes a point where it becomes irrelevant," he says.

Do: Make It Easy on the Eyes

When you're writing a résumé, remember that you only have a few seconds to catch the employer's attention. Rather than using fancy fonts, Meg says to stick with Ariel and Times New Roman so your résumé isn't distracting and is easy to read. Use the oldest version of Microsoft Word you can find to help ensure that the format won't change when viewed on a different computer.

Make sure you have a header with your name and contact information, including your current address, e-mail and cell phone number. Highlight past job titles and responsibilities so it's easy for an HR manager to digest.

Meg also suggests giving the employer the hard facts about your experience. "As an intern, you may have worked on a team or project. Specify: 'Here's my role. I was one of five with the goal to increase project revenue.' State the facts and hard numbers without giving out proprietary information," Meg says.

And while participating in Greek life and other on-campus groups can show school involvement, make sure you only include activities "that are going to set you apart in a positive light," Meg says. "As a new graduate, you don't want people to think you're a big sorority chick."


Don't: Underestimate the Importance of Details

It goes without saying, but there should never be typos in your résumé. It's a reflection of your work ethic.

When Meg sees grammatical errors and typographical misspelled words in résumés, she always wonders, "This is your best product? [A typo], to me, is a really big turnoff. This should be a shining example of yourself."

It's not spell-check's responsibility to catch your mistakes. Print out a hard copy and ask a friend (or five) to read it over. And since it's tough to find your own errors, try reading the résumé backward. "You can look at it all day," Meg says, "but you know what you want it to say, and you read what you want it to say."

The bottom line is this: Don't rush. Remember that story about the Soon-to-Be-Mortified Applicant? Enough said.