This Woman's Heartwarming Story About Her Sister Will Make You Smile

An O editor on the often giddy, frequently witty, not-always-pretty connection she shares with her little sister, Meggie.
By Katie Arnold-Ratliff 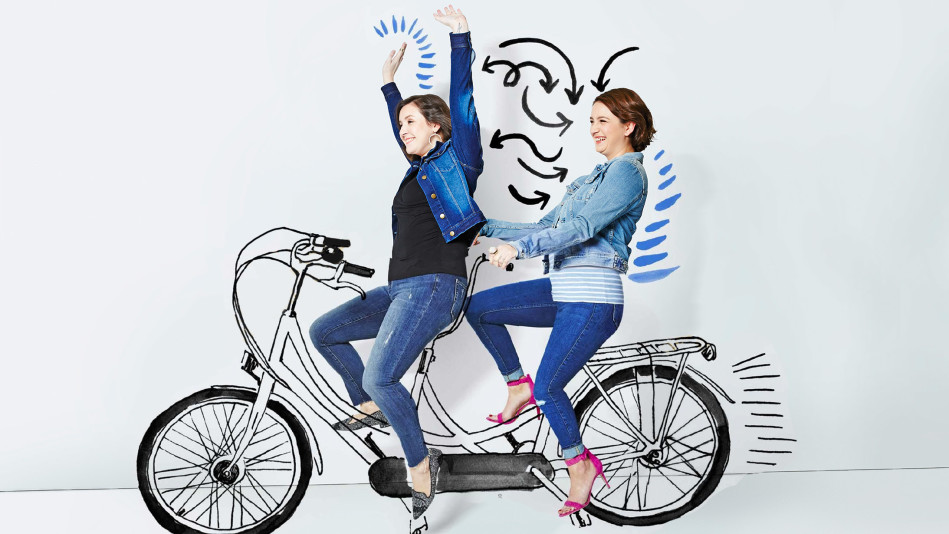 Photo: Lauren Perlstein
When we were small, Meggie and I smoothed an afghan over the carpet of my closet, wove string lights through the hangers, and lay down, shoulders pressing, beneath our private stars. At night we'd bathe together in the narrow tub, launching tidal waves onto the linoleum and inventing nonsense songs. We'd crouch in the sideways backseat of Dad's parked pickup, and hide in the pasture of the horse ranch where we grew up, coiling together in the hay trough. My sister and I craved tiny worlds built for two, sardining our grubby selves into crannies. I think our bodies wished we'd been twins.

Of course, the first few years we fought mercilessly. When she was 2, she skulked up from behind and pistol-whipped me with the butt of a toy six-shooter. When she was 3, I flung a comforter over her head and watched smugly as, sobbing, she failed to find her way out. Our venom was twinned with fealty. When she was 4, some trespass or other made me yell at her, "I hate you!" She made a strangled sound, threw herself on her bed and wept.

At times like these, I'd be overtaken by tenderness for Meggie—it would descend like rapture and I'd be swollen with remorse, and we'd find those tiny places to squeeze into. Often we'd do Our Thing: I'd lie supine on the brown tweed couch beneath the photo of Grandpa, and, nestled between my legs, she'd recline against my chest. We'd watch TV and sleep and converse this way, our talk all movie quotes and burps and impressions of Dad. When we did Our Thing, Meg would say wonderingly, "We're acting like real sisters."

The day I moved into my freshman dorm, Meggie cried. "Can I stay over sometimes?" she asked. I was startled. I knew she loved me. I didn't know she liked me. After that, everything changed. Our adulthood became one long co-adventure.

We've stayed up all night watching Happy Days, made our cats FaceTime each other, eaten In-N-Out burgers at 10 A.M., filmed ourselves screaming to watch the playback in slo-mo. Many mornings she sends me a video of herself dancing in the ladies' room of her office. We've coined a private acronym: GOOMB, as in, Get Out of My Brain. As in, the thing you say when it's 2 A.M. and you're in North Platte, Nebraska, two days into a feverish cross-country drive, and somebody blurts out the weird name of a river—Nishnabotna—from four hours ago because it's stuck in her head and the other person says, "I was thinking it, too. GOOMB, dude."

A world without Meggie makes no sense. A world without her is a world flopped on its axis like a failed soufflé. It's a world I won't live in. She's my mom and my baby. My best friend. My real sister. Ten years ago, just before I was to walk down the aisle alone, I had an epiphany. There was indeed someone in a position to "give me away," as they say. Someone who owned my heart. I took Meggie's hand, and we went forth together—as we have done, and as we will do.
From the March 2016 issue of O, The Oprah Magazine