How to Stop Being a Martyr

If you're chronically overextended, underappreciated, and very, very angry, there's a simple solution: Stop playing the martyr.
By Martha Beck 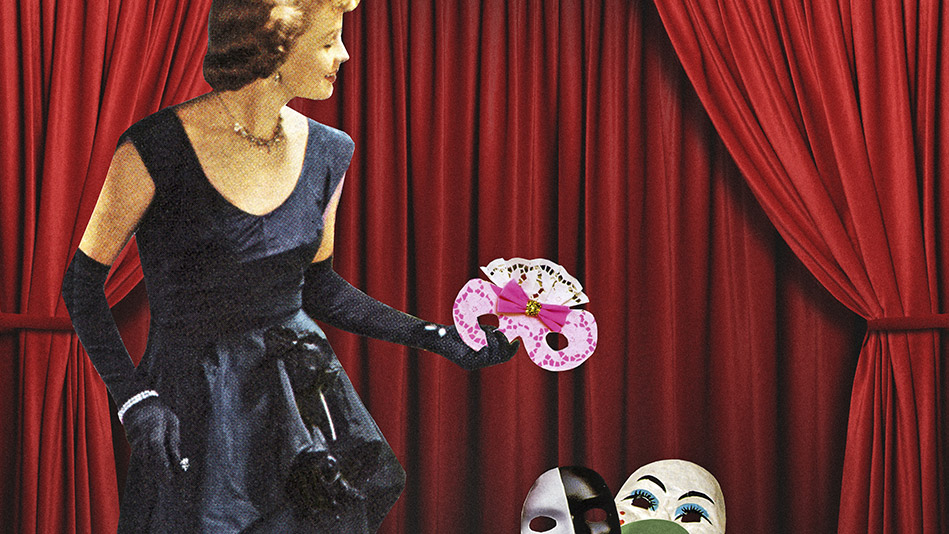 Illustration: Beth Hoeckel
It's midnight. You're alone in the office, doing the reports again because no one offered to help. You went home briefly to make dinner for your husband, your kids, and the cousin who's crashing with you until he can stop huffing paint and get a job. Now you're ready to cry—or stab someone with a pen. You're only trying to be a good employee, wife, mother, relative! My dear, you are also a martyr.

Actually, though, you're just playing the martyr. It's a role you've fallen into. And you don't have to stick with it; you simply need to change the script.

In healthy relationships, people share their feelings and respond accordingly. If I stepped on your foot, you could say, "You're stepping on my foot." I'd apologize and move my foot. This is not how it goes down in a Karpman triangle.

Here's an example: Sandy is the only child of an alcoholic mother, Dolores. One day Dolores staggers onto Sandy's foot, heedlessly causing pain because that's what persecutors do. Sandy says, "You're stepping on my foot!" Now Dolores, racked with guilt, gin, and self-loathing, turns into the victim. "I didn't mean to!" she sobs. "Can't you see I'm trying?" Then Sandy comes to the rescue: "I'm sorry, Mommy! How can I make you feel better?" Suddenly, Dolores is off the hook, and Sandy's convinced that if she can do enough to please her mother, she'll be loved again. They keep this up for years.

Over time, Sandy learns that it's not safe to express her feelings, and that people value her only when she does things for them. By the time she reaches adulthood, she's become a full-blown martyr, cleaning her mother-in-law's basement, sewing Halloween costumes at 3 a.m. She's sweet on the outside, but inside she's a roiling mess, overwhelmed by work, stifled by her relationships, secretly mad at everyone. Sometimes her anger boils over, and she turns into a victim ("Nobody appreciates me!") or a persecutor ("You could offer to help, you jerk!"). Then she feels guilty about those feelings and atones for them by doing something nice, and the cycle continues. Ultimately, clinical depression or stress-related illness may set in, and she'll end up sacrificing her health or even her life.

But there's an alternative to this horror show: Stop acting and live authentically. Once you commit to trying, it's surprisingly simple. I promise. Sit down when you have some uninterrupted time (say, while you're donating your weekly gallon of blood). Relax. Breathe. Now begin writing, stream of consciousness, about a few episodes when you've felt that twinge of self-sacrificing resentment. Just pour it all out—and then read what you've written.

Do you see any patterns? Are you constantly swooping in to the rescue, making do with less than you need, or feeling abandoned because no one's noticed your suffering? Think about the rewards you've envisioned in your wildest martyred fantasies: appreciation, recognition, love. Have you ever gotten the payoff you've been longing for?

Now check your body. How's your stomach? Does your head ache? Move on to your emotions. Are you sad, furious, afraid, all of the above? You may have a lot of rage, so be as patient with yourself as you pretend to be with others.

Once you know what you're feeling, tell at least one safe person. For martyrs, the best option is usually a therapist, who won't try to entangle you in another triangle. If you choose a friend or a family member, proceed with caution: Does she respond as a whiny victim ("I'm sorry I'm such a disappointment!"), an angry persecutor ("What is this, an ambush?"), or an icky-sticky rescuer ("This is my fault! I failed you!")? Your martyr complex may rear up, and you'll feel the urge to do more for someone—or ask for less—than you want. Don't punish yourself. It takes time to break a pattern this strong.

When you finally find someone who doesn't say "What about me?" but "Tell me more," you may flounder in the unfamiliar space of truth. You'll be tempted to filter the other person's response through your dysfunctional lens. She doesn't mean that. I'm a disappointment. At this point—get ready, martyrs—you can cut right through this misery by saying exactly what you're thinking. As in, "I'm afraid you don't mean that, and that I'm a disappointment." Then, really listen to the answer. If it seems kind and honest, with no hidden agenda, you may feel disoriented. That's because you're finally stepping offstage. Keep going. Keep speaking up. What are you feeling? What do you want?

And some night, when the clock strikes 12, you'll find yourself in the dark again—snoozing in bed. You told your coworkers you were swamped; some grumbled, but some pitched in. You asked your husband to help with dinner, and he did. Your cousin, who didn't appreciate your new authenticity, has stormed off to play the victim somewhere else. Oh well. That's the price of taking off the martyr's mask and showing up in the real world as your true self. Stay the course, and your life will keep improving. Dramatically.

Martha Beck is the author of, most recently, Diana, Herself: An Allegory of Awakening.

From the October 2016 issue of O, The Oprah Magazine