These outdoorsy editors are literally rewriting history.
By Molly Simms 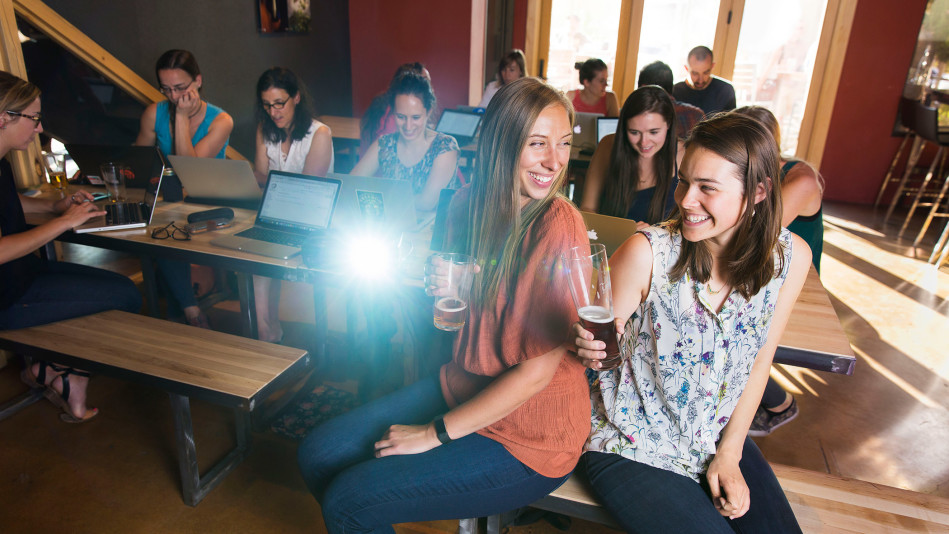 Photo: Sam Comen
Journalist Kassondra Cloos (above, right) of Boulder, Colorado, is a die-hard fan of hiking, climbing, and other fresh-air pastimes, and writes mostly about outdoor-industry superstars. When Cloos saw a post by fellow writer and Boulderite Abigail Wise (above, left) about a New York City Wikipedia edit-athon—an event whose goal was to get more notable women their own Wikipedia pages—she was shocked to read that 90 percent of the site’s editors are men. Cloos wondered how that would affect who was represented, so she searched for powerful women like Patagonia CEO Rose Marcario, former CamelBak CEO Sally McCoy, and ultra-runner Junko Kazukawa. Not one had a page. “Their achievements were missing from this public record,” she says.

After exchanging tweets, Cloos and Wise had a mission: to recruit journalists to create entries about overlooked female visionaries. At the first event, held in a brewery, writers crafted entries with the help of Wiki editors. In two hours, they’d expanded or drafted 15 pages, including those on Marcario, climber Liz Robbins, and Burton Snowboards CEO and co-owner Donna Carpenter.

Afterward, Wise and Cloos were inundated with messages from eager entry writers; the two now hold regular edit-athons with their group Adventures in Wikipedia, announced via social media. “Female outdoor-industry pros broke the mold,” says Wise, who noted that their new Wikipedia pages will pop up in Google searches for years to come. “We had to help these badasses get the recognition they deserve.”
From the September 2017 issue of O, The Oprah Magazine

More Inspiration
7 Life Lessons from Cleo Wade
8 Writing Prompts Every Spiritual Person Should Try
11 Everyday Heroes Who Bring Healthcare to Those in Need
The Important Reason Every Adult Should Call in "Sick" to Work Sometimes
3 Stand-Up-for-Yourself Strategies for Sensitive People
The Gift That Comes from Hitting Rock Bottom
Oprah Talks to RuPaul About Life, Liberty and the Pursuit of Fabulous
How Megyn Kelly Deals With Online Bullies