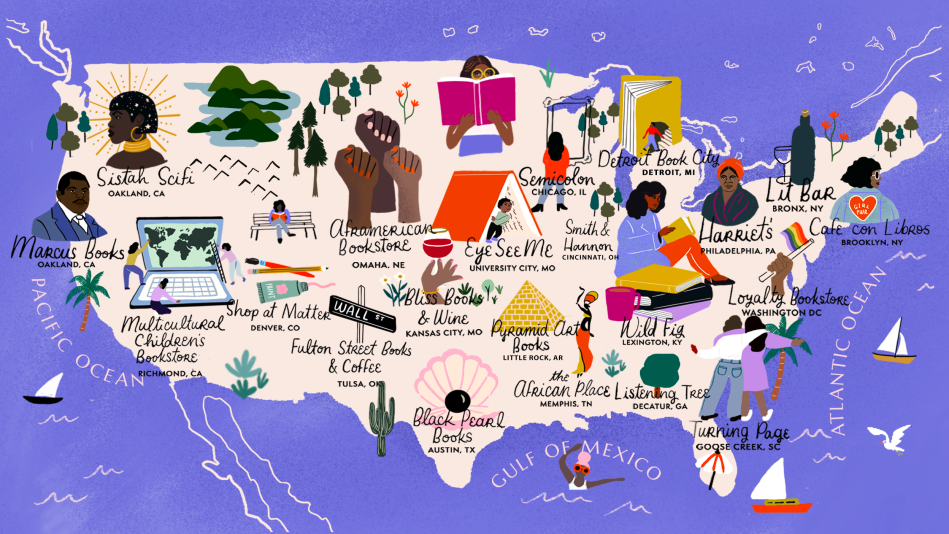 In the wake of the tragic killings of Ahmaud Arbery, George Floyd, and Breonna Taylor—combined with the global uncertainty caused by the coronavirus pandemic—the United States is in the midst of a national revolution. While institutionalized racism and police brutality have long been a part of America's history, millions across the country are now reconciling with and addressing generations of racial inequality. For some, that means taking to the streets in protest. For others, it's uplifting the cause by supporting Black owned businesses, or seeking education through anti-racist literature.

Because of the latter, one industry that's seen an influx in support and attention are Black-owned bookstores. Many shops across the country are overwhelmed with customers due to the collective push to both "buy Black" and read books written by Black authors.

"We've definitely seen a surge in our book sales, specifically for our titles on racism and history in this country," says Onikah Asamoa-Caesar, owner of Tulsa, Oklahoma's Fulton Street Books—which had its grand opening with limited capacity due to COVID-19—on July 3. "When I think of meaningful change in the community, reading and having more information is amazing. Now we have to figure out how to translate that and support folks in taking things from theory to practice."

"Many folks are buying books, but may not have a home to dialogue about it," she says. "This work cannot be done in isolation; we all need community. I'm tired of solidarity with Black folks only coming after death when some of us have spent our lives talking about and organizing against systemic racism... So, while I definitely appreciate the support, it's been hard to profit off the bodies of fictive kin."

It should also be remembered that independent book stores owned by African Americans have been around for decades. The first in the country was Oakland, California's Marcus Books, which opened its doors in 1960 and is still in business today. There are now 123 other Black-owned establishments in the country, and though they make up just 6% of indie bookselling companies in the U.S., they're home to powerful works that serve to educate and amplify vital voices.

"The stories have always been there, and the experiences have always been there, but not everybody was comfortable talking about them," says La'Nae Robinson, who co-owns Bliss Books & Wine in Kansas City with her sister, La'Nesha Frazier. "So I think now that it's more in the spotlight, it's creating more conversations, and people are open to having conversations—and they're actually holding them in their hands and educating themselves on topics that they just didn't think about."

From online book boutique Sistah Scifi—a shop that strictly sells Afrofuturism novels—to children's bookstore The Listening Tree in Decatur, Georgia, there are plenty of diverse Black-owned bookstores you can safely shop at right now, and always, no matter how much (or little) the nation is focused on a longtime continuing struggle.

Head over the OprahMag.com to view the official directory of Black-owned bookstores in America, starting in Arkansas and ending in Washington, D.C.: 125 Black-Owned Bookstores in America That Amplify the Best in Literature.
Published 08/31/2020

More Inspiration
The Moment Isabel Wilkerson Learned Caste Was an Oprah's Book Club Pick
The Best Books of Fall 2020—So Far
12 Eye-Opening Reads About America
What You Should Read This Fall, Based on Your Zodiac Sign
Jane Fonda's New Book What Can I Do? Is a Climate Crisis Call to Arms
Oprah Shares the Books That Changed Her Life
Sue Monk Kidd's New Novel The Book of Longings Imagines if Jesus Had a Wife
Elizabeth Gilbert Admits: "I Need a Dose of Courage Every Day"