Peter Walsh's Declutter For a Cause Challenge

Peter Walsh wants you to get serious about lightening your load—getting your friends, neighbors, and entire community involved—and he'll even come help you. Yes, you.
By Meredith Bryan 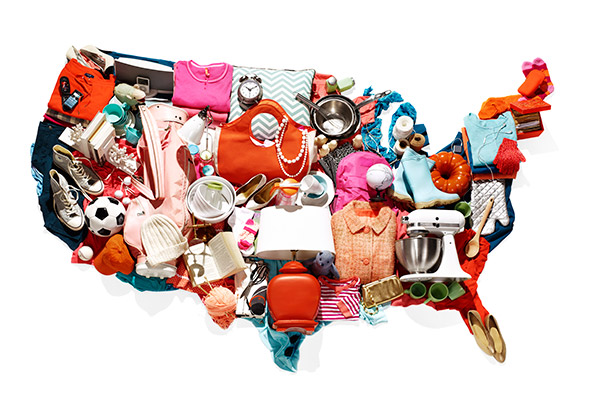 Enter our "Declutter For a Cause" Sweepstakes! View the official rules.

For several years now, we at O have enlisted organizing genius Peter Walsh to prod—in some cases coerce—our millions of readers into cutting down on clutter. (We even once roped him into helping vanquish ours, and you don't know clutter until you've seen the pileup of old magazines, not-yet-published novels, cupcakes, wrapping paper, and energy drinks that is O's offices.) Decluttering America is a big job for one man. As Walsh, an Australian, likes to say, "You people are not exactly minimalists." But to him, the task is not just about off-loading stuff; it's about what, in that stuff's absence, flows in. "When you purge unnecessary possessions and open up your space, you feel more energized, focused, and motivated," explains Walsh. "Every time I help someone declutter, they say, 'This has transformed my life.'"

And what if you transformed the lives of others in the process? This year O and Walsh are asking you to get rid of your excess stuff for good, to permanently purge what's weighing you down and pass it on to someone who needs it. "Not everyone can afford to write a check to charity," says Walsh, "but everyone has clutter." And your castoffs, never-worns, and shouldn't-haves can look a whole lot like basic necessities to others. Better yet, both sides benefit: As Walsh rightly points out, "Knowing your excess will be used by someone else is a great motivator to get rid of it."

It's also great motivation for thinking bigger. A couple of years ago, Walsh received a remarkable e-mail from Jane Hofmann, 49, of Ashburn, Virginia. On a local blog, Jane had read about a then 21-year-old named Ryan Diviney who was in a coma after being beaten late at night outside a convenience store in Morgantown, West Virginia, where he was attending college. His family lived in Ashburn and was struggling to pay his medical bills (to learn more about Ryan's story, see RyansRally.org). Though she'd never met the Divineys, Hofmann spoke to a friend, Christine LeTourneau, 47, who spoke to a few other friends, and soon they'd organized a massive yard sale of their town's clutter, from clothing to toys to exercise equipment, furniture, and appliances—all to raise money for Ryan's treatment.

Walsh got involved when Hofmann, who had seen his show, Enough Already! (now called Extreme Clutter), on OWN, e-mailed him to request a signed copy of one of his books for a raffle prize. After hearing about Hofmann's project, Walsh was so inspired that he instead flew to Virginia to help. "It was like a well-organized military campaign," he recalls. "They'd thought of everything." Strapping young men from the local high school were moving boxes, community members were selling baked goods, and a "boutique" area showcased higher-priced designer items. Hundreds of shoppers ultimately helped raise $30,000 for the Diviney family. (Last fall the women reprised the event, raising another $22,000.) "It's funny," says Walsh. "Until you ask, you may not realize how many people are willing to help."

We at O were so inspired by Hofmann and LeTourneau's story that we decided to encourage readers across America to plan similar events. Want to aid a friend whose child has been hospitalized? Help rebuild a local library that was damaged by fire? We challenge you to submit event proposals (see "Declutter for a Cause" Sweepstakes) by March 18. Working with Peter Walsh, we'll choose one creative, ambitious local declutter-athon to feature in a future issue of the magazine—and Walsh will personally come help ensure its success. You can make miracles in your own community—and it all begins with your unwanted stuff.

"You know, I never thought I would say this," says Walsh, "but sometimes, a little clutter can be a good thing.