Peter Walsh helps an O staffer conquer her clutter to make room for her mom.
By Katie Arnold-Ratliff 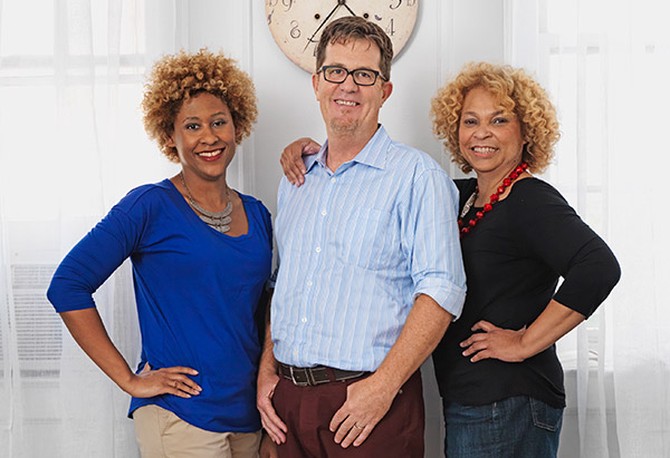 It's a truth universally acknowledged that renting in New York City involves paying twice as much for half the space. Add an extra person to that space, and the math slips even further out of your favor—especially if you're both sitting on enough stuff to stock a Bloomingdale's. And if that new arrival is your mom? You can expect to confront a whole other set of challenges.

So discovered Ashley Williams, O senior editor and lessee of an Upper East Side one-bedroom, who recently acquired a roommate: her mother, Esther, who's found herself in a transitional period. "Mom had been teaching English in Massachusetts, and working as a private tutor in Tennessee before that," says Ashley, "but she was looking for a change—"

"—and I'd always wanted to live in New York," Esther cuts in. A vivacious semi-retiree, she gives off a whiff of that other Esther Williams, the buxom beauty who made her name starring in features for MGM. (This morning, dawn has barely broken and Esther is singing to herself in the living room while dancing a jaunty merengue.) Ashley—who possesses an easy laugh and an outgoing nature—is an apple who hasn't fallen far from the tree. This is that rare mom-daughter duo who genuinely enjoy each other.

Maybe that's because they share a few key traits—like, say, the insatiable desire to hoard clothing. And a mutual quirk that could generously be called pragmatism (you'll never catch these two without an umbrella!) and, less generously, pack-rat-ism (do they really need eight?).

Esther is staying in the apartment only until she gets settled in one of her own, but even a few months is a long time to feel cramped. And there's no denying that the living room is currently overrun: a metal clothes rack sags with Ashley's tops and tees, displaced when Esther took over her dresser; boxes of Esther's paperwork clog the corner by the window; and Esther's swollen duffel bag, which she can't yet unpack, slumps against the TV console. "Yeah," Ashley says with a sigh, "I hate that duffel bag." It doesn't help when Esther makes plain that the stuff inside the bag is here to stay, with a defensive "It's not like there's that much in there," followed by a definitive "We're not going through the duffel bag." Okay, then.

Next: Peter Walsh to the rescue! 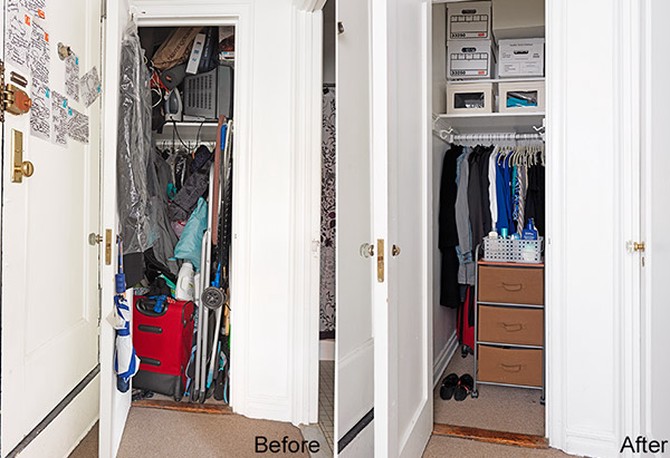 Luckily, this is precisely the moment when organization whiz Peter Walsh arrives to do what he does best: deliver a space-clearing smackdown. Walsh is genial, as always, but he's not one to take no for an answer. And today, his tough love is urgently needed. Though there are two ample closets in this 350-square-foot apartment—a New York miracle!—one is so overloaded with Ashley's flotsam (the box a flat-screen TV came in, a glut of shopping bags, a Pan Am stewardess Halloween costume) that Esther can't hang a single shirt. Emptying the second closet would be game-changing: the metal rack eighty-sixed, and the dreaded duffel with a forever home.

But the closet, Walsh makes clear, is not really the point. He turns to the Williams women and poses his standard opening question: "What's our intention today?"

"It's a small apartment," Ashley says. "So we need to get rid of stuff."

Walsh smiles in a way that says, "Try again."

Esther exclaims, "I need a place for my clothes!"

Walsh shakes his head. "It's not about clothes," he says. "What's our intention?"

Ashley finally gets it. "To create a lovely home that's equally ours," she says.

"Good," Walsh says. "This isn't just about space, it's about preserving this"—he points from mom to daughter, indicating their good vibes. "I'm here to make sure you keep that."

"Oh," Ashley says. "This is going to be like therapy."

"Yes," Esther agrees, looking concerned. "Except in front of people." But seconds later, she's back to her default state of full-bore delight, exclaiming, "Peter, you're my new best friend!"

Next: Cleaning out the living room 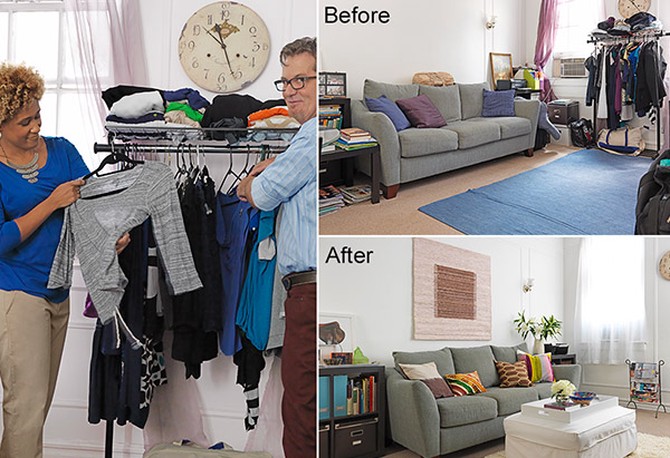 The case of the unlivable living room. After Walsh helps Ashley purge a rack's worth of unworn clothes, mother and daughter's common area becomes an airier—and far neater—space for relaxing.


"You won't be saying that in a few hours," Walsh deadpans.

And so the nitty-gritty begins. Walsh walks confidently toward the metal rack. "Does this thing make you feel relaxed?"

"So let's get rid of it. You will keep things you look great in, things that fit you now, and things you love to wear. The rest goes."

As Ashley releases this last item, Esther moves to claim it: "Ooh, I'll take that!"

Walsh's head whips in Mom's direction. "Step away," he says.

When the rack is clear, it's time to move on to the junk piled on either side of the sofa; if it goes away, Walsh theorizes, Esther could put her papers in tidy magazine files and keep them in that space. The stuff to be cleared consists of old books, magazines, a cornucopia of dusty knickknacks, a musical instrument shrouded in a padded case (it turns out to be Ashley's enormous cello; "You couldn't play the flute?" Walsh jokes), and other bits and bobs. Ashley easily parts with the bulk of the books and tchotchkes, but when she arrives at a collection of stories she received from Esther, she hesitates.

"It was a gift from my mom," she pleads.

"Does your mother love you?" Walsh asks.

"Is that love contingent upon this book staying?"

"Her having a place for her things will generate more closeness than your feeling obligated to keep one book," Walsh says.

Ashley's eyes widen: Houston, we have a breakthrough. Suddenly she's casting off her possessions like some kind of crazed monk.

Next: Organizing your closet 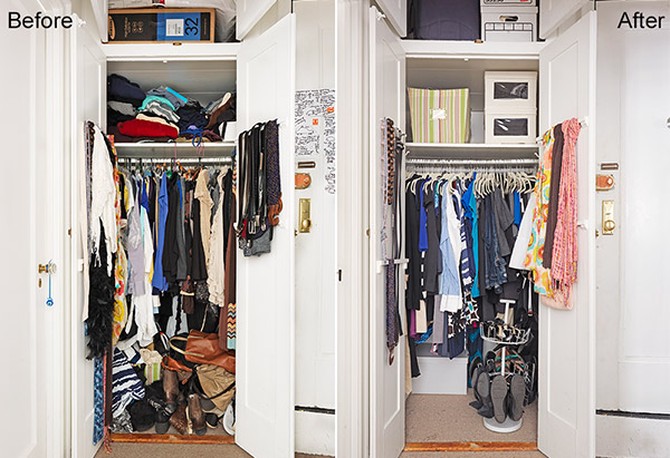 Esther, meanwhile, is sliding toward mutiny. A quarter of the items Ashley has jettisoned are now stacked in a surreptitious pile at Esther's feet: a Norton anthology of classic literature ("You don't throw away a Norton!" she whispers to herself), a commemorative issue of Time with Princess Diana on the cover ("This is history!" she says), and various items of discarded clothing ("I think these are actually mine, anyway").

Ashley moves on to the pair of closets, beginning with the one in which she hangs her own clothes—and manages to maintain her exemplary donation streak. ("Toss!" "Don't need it!" "Get it out of here!" she shouts, overcome with the spirit; "I'm actually getting a little concerned you're not keeping enough stuff," Walsh says.) Soon her closet is an orderly showcase of clothes that actually stand a chance of being worn, and the door even shuts properly. Then she whips through the stuff in the other closet, too: out go six of the eight umbrellas, a few window screens of mysterious origin, a six-foot plastic Christmas tree, the retro flight attendant getup, and a lot more. Just like that, there's room for Esther's clothes, as well as her wheelie cart of toiletries and accessories, which had been choking the entrance to the bedroom. All in all, there's some major momentum happening. There's a sense of accomplishment in the air. And there's...Esther, pilfering more stuff from the donation pile.

All morning Walsh has seemed not to notice the steady progress of Operation Undermine. But when it comes time for Esther to start purging her stuff, he's appreciably more forceful.

"But remember how helpful I was when Ashley was clearing the clothes rack?" Esther says. 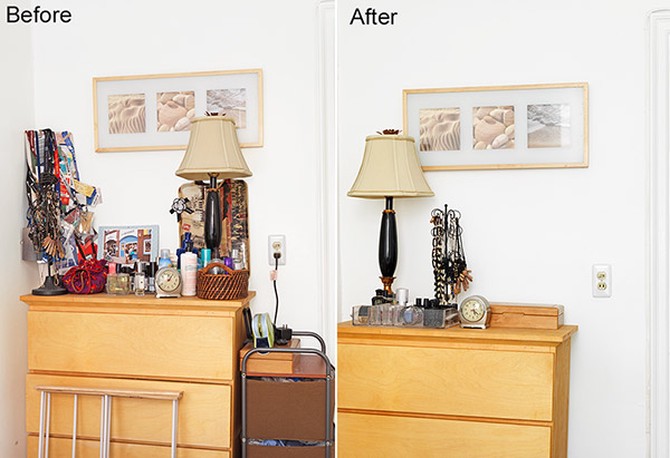 Looking resigned, Esther unzips the duffel. The first item she lifts from it is a worn leather jacket. "No," Walsh says flatly. "Moth holes. I can see them right there."

Then he vetoes a skirt. "But it's a Tracy Reese," Esther says.

"That means nothing." Away it goes.

Next up is a skimpy dress. Like, really skimpy. "Mom," Ashley says, "this isn't you. This isn't classy." Esther tenses. It's plain as day: She doesn't want to hear this.

"Let me tell you something about my partner and me," interjects Walsh. "Our relationship operates on a basic premise: 'I love you; I want to be with you. If that changes, I'll let you know.' So if he says, 'That shirt doesn't look good on you,' he's actually saying, 'I love you, and that shirt doesn't look good on you.' If you accept this basic premise as fact, you know that whatever the other person says is from a good place."

Esther considers this. "Wow," she says. "That really moves the discussion to a different level." 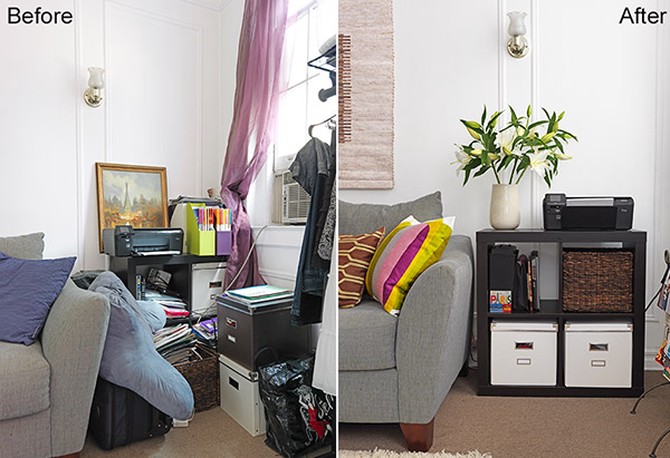 Walsh nods. "You know, what you two are doing is brave. I'd kill my mother if I lived with her. Or she'd kill me. You have to really be careful of each other's feelings for the duration of your time living together."

Esther looks moved, and attacks her task with renewed vigor. Soon, 14 pairs of "pajamas" are on the donation pile, she's laughing as Walsh lovingly mocks her tiered white maxiskirt ("Hello, I'm from Holland!"), and the hated duffel sits empty on the top shelf of a—very tidy—hall closet. A hall closet that, in fact, has now been given over entirely to Esther's pared-down wardrobe. Over the course of five hours, the pair have purged an entire moving truck's worth of stuff—and arrived somewhere pretty remarkable. They promise Walsh that during the inevitable disagreements of living together, they'll use words like "us and "we," not "I" and "mine," because, as he'd explained, "once you start thinking of yourself as being on opposite teams, things fall apart." And, Walsh says, turning to Ashley, "just as you've looked at everything in your home today and said to yourself, "I actively choose to have this here," you need to make sure that's true of your mom, too." The message is clear: Cohabitation is an admirable goal, but if it starts to impinge on your relationship, it can't continue.

At day's end, the living room is even airier than it was pre-Esther, and Mother's load is happily out of sight. When Walsh leaves them, Ashley and Esther are smiling and standing by the front window, surveying their lovely home—which is, per the day's intention, equally (and even happily) theirs.

Next: Pare down your pantry in 30 minutes or less
From the May 2013 issue of O, The Oprah Magazine
More Home
How to Host A Declutter Party
Organize Your Kids' Rooms in 2 Easy Steps
The Best Way to Organize a Shared Closet
5 Steps to Kick-Start Your Clutter Cleaning
Peter Walsh's Best Organizing Advice
Extreme Office Makeover: The O Magazine Edition
The Housewide Shoe Purge That Takes Less Than an Hour
Peter Walsh's 5 Ways to Declutter Your Home This Weekend