Take a peek at the sophisticated nautical style within these East Coast getaways featured in the book The Seaside House.
By Nick Voulgaris III 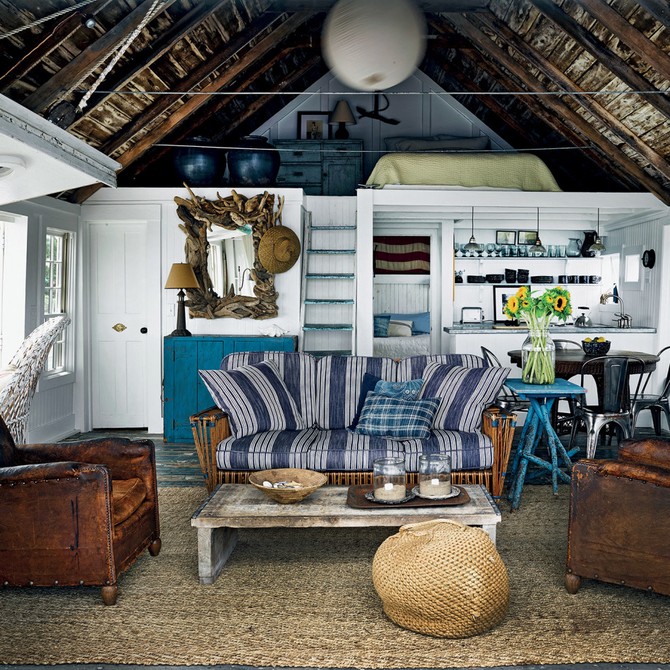 5 of 7
Provincetown, Massachusetts
Provincetown is a meeting ground for creative types, which is precisely what attracted the owners of this waterfront cabin to the charming seaside town. Decades earlier, they had visited Captain Jacks' Wharf and took notice of the quaint fishing station that was converted into residences on a long pier. So when the opportunity came to purchase one of the cabins, they were ready.

The wharf and its small cabins were built in the late 1800s for fishermen to store their tackle and sell fish. The soaring open ceilings remains as it was over one hundred years ago. And the large rope-and-pulley operated window, which was designed for selling fish, now is used to open up the cabin to the sea that surrounds it.

A 1930s sofa from L.A. and worn 1940s French leather club chairs anchor the living room. To the left is the large window originally used for selling fish, and above the kitchen is the guest loft.
Published 06/06/2017
PREVIOUS | NEXT
More Home
5 Creative Spaces We Love—and How to Get the Looks
7 Ways to Create a Gorgeous Bouquet with $10 or Less
3 Decor Secrets of Happy Couples
Where Oprah Goes to Get Away from It All
Coming Home: Iyanla Vanzant's Home Makeover
The 7 Prettiest Summer Porches
Decorate for Spring: 10 Tips from 10 Top Designers
Oprah's Home Makeover: She's Changing Everything