How Internet Fundraisers Can Help You Cover Emergency Medical Bills

More people are turning to internet fundraising to pay their medical bills. If you're one of them, here's what you need to know.
By Bradley Rife 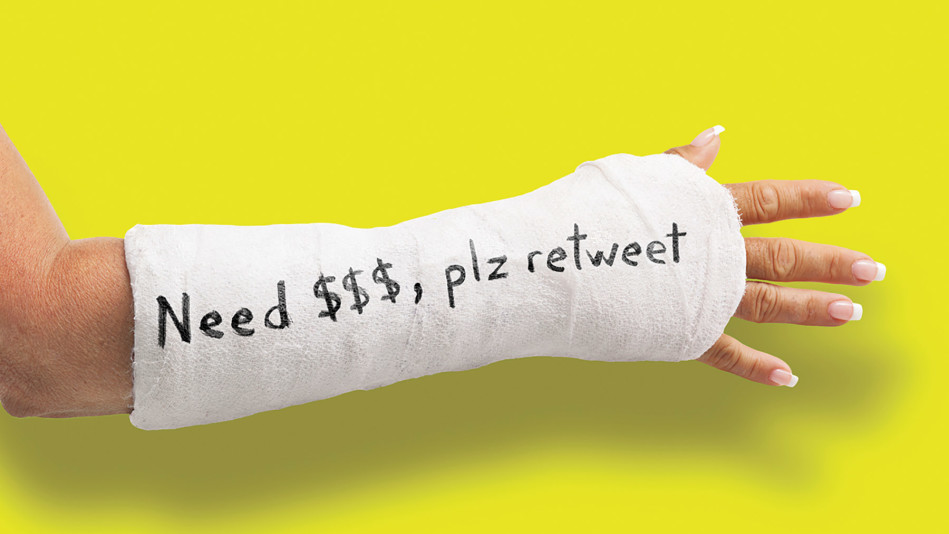 Illustration: Matt Chase
Ashley Kostiuk was nursing her infant son when she felt it—a tiny hard mass in her right breast. The 31-year-old mom of two tried to convince herself it was probably just a clogged milk duct. But two months later, the lump had grown. A biopsy confirmed Kostiuk's worst fear: She had breast cancer.

First came the distress and dismay. Then came months of chemotherapy (three hours round trip every three weeks), a double mastectomy, and breast reconstruction. And then the bills. And bills. And more bills. Kostiuk was shocked by the cost of her treatment, especially because she had good insurance. As she faced additional surgeries and radiation, she didn't know how her family would pay for them.

That's when Kostiuk's aunt Patti Amstrup set up a fundraiser on GoFundMe. Almost immediately, people—and not just friends and relatives—started pledging to "Help Ashley Fight Cancer." Amstrup has since raised more than $14,400 that her niece has been able to put toward travel expenses and the insurance plan's annual $5,500 out-of-pocket maximum, letting the family breathe easier.

For years, crowdfunding—raising money from family, friends and even strangers through social media—has been a grassroots way to launch projects or products. But now, on sites like GoFundMe, YouCaring and Generosity by Indiegogo, campaigns to cover medical expenses are among the dominant categories. In a 2016 survey, one in five working-age Americans with health insurance reported difficulty paying medical bills. Medical debt is already the leading cause of personal bankruptcy in the U.S.; as uncertainty around the future of the Affordable Care Act drives up many premiums, and out-of-pocket costs continue to rise, even more people will likely face health-related financial crises.

While crowdfunding sites are no substitute for comprehensive health insurance, they offer a modern version of charity potluck dinners—with broader reach. Campaigns can help sick or injured people hold on to their home, their retirement savings, even their life. They also give friends and family a chance to lend a hand. Here's what tends to work best:

Keeping It Real
To estimate how much money you'll need, start by considering out-of-pocket insurance maximums, says Lauren Fischer of the nonprofit crowdfunding site Red Basket. Then add uncovered bills (like visits to specialists) as well as transportation, lodging and lost wages. Start with a conservative goal, says Jennifer G. Kim, a doctoral student at the University of Illinois at Urbana-Champaign who has studied medical crowdfunding. That's what writer and comedian Akilah Hughes did in 2016 when she needed surgery to remove benign liver tumors that were making her ill. She asked for $10,000 on GoFundMe, then gradually increased her target until she'd raised nearly $40,000, covering 60 percent of her costs.

Getting Personal
Effective campaigns are detailed and personally compelling, says Rob Solomon, CEO of GoFundMe. Write a thorough description of the recipient's health status with an explanation of how the money will be spent, and update your supporters regularly. Use a specific title, like "Monica's Medical Fund Against Lyme" (instead of a vague "Please Donate"), and include a recent snapshot or video of the patient so donors can feel a connection.

Spreading the Word
The key to crowdfunding is, of course, your crowd. Appeals by email—in which people send their contacts a campaign link—tend to be the top source of contributions on Indiegogo, while GoFundMe reports that Facebook posts can boost donation rates by 350 percent. Organizers can expect a third of a goal to come from friends and relatives, the second third from acquaintances, and the final third from networks of strangers, some of whom may have something in common with the recipient, says Breanna DiGiammarino, senior director of social innovation at Indiegogo. For example, the campaign for Kostiuk generated $900 in a single hour after a breastfeeding support group shared a photo of her nursing her son for the last time before chemo. Says Amstrup: "It was just a miracle that the right people saw it."

Wishing Well
Donating on a crowdfunding site? Add a note. Letting the recipient know you're rooting for her often means just as much as your gift.
From the December 2017 issue of O, The Oprah Magazine