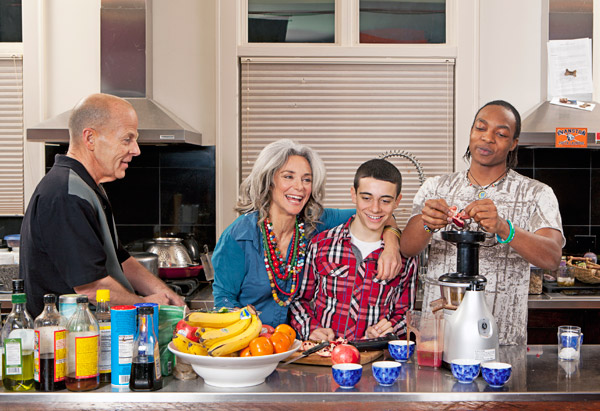 Photo: Gregg Segal
PAGE 3
"If I were the American standard of beauty, I'd have colored, blow-dried hair," she tells me, licking chocolate from a mixing bowl. "It's not that I'm against it; I'm trained in Botox"—as well as an injection therapy that claims to dissolve fat. "But less is more. It should be subtle, like you look rested. I try to get eight to ten hours of sleep per night. The mistake is that people focus on the external stuff. I'm not antiaging; I'm more about longevity, health, and keeping your mojo."

"Would I rather look like I did ten years ago? Yes. But I don't. So what am I going to do about it? It's not going to stop me."

To keep her skin looking luminescent, Bark uses a "dermal needle roller," a handheld device studded with dozens of tiny needles. The roller causes controlled injury, which she says stimulates collagen production and blood flow. Every few days, she exfoliates and cleanses using a floss silk mitt and papaya seeds, honey, and apple cider vinegar, then slathers oils, from broccoli seed to cranberry seed to sea buckthorn, on her face and neck. The system seems to be working beautifully.

I ask Bark what's on the schedule for tomorrow.

"I might drag your sorry ass to hip-hop," she says.

The mere thought of following Bark's example is exhausting. I'm ten years younger than she is, and all I want to do tomorrow is curl up and chat. But Bark's message gets under your skin. For instance, I see now that living full-tilt is an active choice. "Things don't just come your way and happen; you make them happen," she says. "Go out and seek adventure, knowledge, wisdom, fun."

At hip-hop class, Bark, wearing her trademark green tennies, is front and center—never mind that she's the oldest student in the coed, ten-person mix. She breezes through the complicated routine, adding her own gyrations and hair flips, looking like she could back up Beyoncé. More to the point, though, she just looks happy. Present, and fully engaged.

"You get what you give," she tells me later. "I give to a lot of people—my patients, my family, my community—and I get it back many times over."

Or as Bark's hip-hop instructor puts it, "Toni is like Wonder Woman. All she needs is the costume."

Stephanie Pearson is a contributing editor at Outside Magazine.

More Fresh Ideas for Staying Healthy
From the July 2012 issue of O, The Oprah Magazine

More Health and Wellness
The Breakthrough That Will Change the Way You Age
3 Tests Every Woman Needs to Take
5 Health Food Fake-Outs
10 Teensy Health Habits That Can Make A Huge Difference
Feeling Achy? The Body Part You Don't Know You Have
6 Busy-Women's Health Dilemmas—Solved
5 Anti-Aging Myths We Need to Stop Believing
10 Simple Rules to Lose 5 Pounds