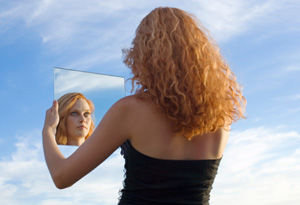 Photo: Polka Dot/Thinkstock
Flip through any fashion magazine, and you'll see dozens of women flaunting whittled waistlines and men sporting six-pack abs. Toss in some designer clothes, high heels, a professional makeup artist and, of course, a little photo-editing, and the message is complete: Tall plus skinny equals beautiful. But, Bob Greene and TheBestLife.com, ask is it healthy?
We've grown up with body image cues telling us thinner is better, but the fact is, skeleton skinny is not healthy—nor realistic. If the Barbie you had as a little girl were a real person, she'd be so underweight that she probably wouldn't be able to menstruate. Young boys are given similarly disturbing standards: Take G.I. Joe figurines as an example. If he were life-size, he would have a 55-inch chest and a 27-inch bicep—almost as big as his waist and bigger than most competitive body builders.

The next time you find yourself comparing yourself to a super-slim supermodel or chiseled celeb, keep this in mind: The bony female dimensions and beefed-up male figures that the media champions as fashionable are about as far from average as Bill Gates' bank account balance. Many of the female models and actresses who capture the media spotlight with their rail-thin figures are on the brink of being dangerously thin.

Does that mean "average American" should be your fitness goal? Uh, no

More Health and Wellness
Are You Making These 10 Health Mistakes?
The Surprising Reason People Gain Weight in Winter Months
6 Women's Health Myths You Can Stop Believing Right Now
How to Quit Sugar, Based on Your Personality
Boost Your Declining Metabolism
The Disease That Kills One Woman a Minute in the US
The 3 Key Supplements You Should Be Taking
6 Busy-Women's Health Dilemmas—Solved