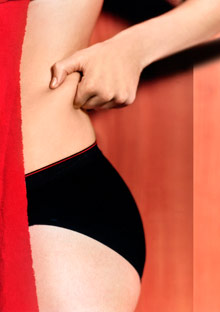 Surprise: The latest research shows you can be overweight and fit, and thin but carrying too much fat.
Leah Dawson is unhealthy—at least that's what public health guidelines would have you believe. The 41-year-old mother of three, who manages her husband's athletic career (he's Olympic skier Toby Dawson), works out four days a week and carefully monitors her diet. Her cholesterol and blood pressure are enviable. But never mind all that: Leah Dawson is considered "unhealthy" because at 5'8", her weight has hovered near 170 pounds. That puts her at 26 BMI (body mass index—the height-to-weight formula doctors use to diagnose weight problems), which is in the overweight category. "My doctor would tell me that I needed to lose weight," she says. "My lab work would come out fine; I've even passed a stress test. But I'm never 'okay.'"

Thirty-nine-year-old Teresa Holler, on the other hand, is considered "healthy." As a physician assistant, Holler knows she needs to monitor her weight. But after a tough pregnancy six years ago, she slowed down her normally rigorous exercise program. Initially, the trim 5'3", 128-pound, size-5 Holler wasn't too concerned: Her BMI remained at 23, putting her in the healthy range of 18.5 to 24.9. Still, she began to worry that something was amiss. "I felt like I was getting this ring of fat around my midsection," she says. "And I was just less energetic." This led her to request a body-fat test from her doctor. She was shocked to find the amount of fat she was carrying on her diminutive frame—30 percent—qualified her as borderline obese, dramatically elevating her risk for diabetes and heart disease. "Here I was, spending my days telling other people how to get healthy, and I'd missed this," she remembers.

Health experts have been too strict with heavy people like Dawson and too lax with normal-weight people like Holler: Researchers at the Mayo Clinic have found that about half of American adults in the normal-body-weight category still have too much body fat—and given that these people also tend to have many of the risk factors associated with heart disease, that assessment is probably correct. "I'm a cardiologist, and I was seeing too many patients whose BMI checked out as normal but who didn't look right," says Francisco Lopez-Jimenez, MD, the Mayo doctor who headed the study. "Some had a big belly, some had low muscle mass. And they had high blood sugar and cholesterol. It became clear to me that the measurements we were using weren't working for these people."

How risky is it for a normal-weight person to carry too much fat? The answer lies in the way the body stores the stuff. "All fat isn't created equal," says Timothy Church, MD, PhD, a professor at Louisiana State University's Pennington Biomedical Research Center. "The deeply deposited kind—visceral fat—produces three times more bad chemicals than other types, and it drains directly into your liver."

Visceral fat bulks up the trunk of the body, and it has been directly tied to increased risk of diabetes and heart disease. (People who carry fat on the hips and thighs seem to have a lower risk.) Importantly, visceral fat tends to be the type normal-weight people have. It sneaks up on a person because it's not especially visible and it can build up without altering weight—replacing muscle that is naturally lost with aging. And that stealthy buildup of fat may help explain the results of a 2005 study in the Journal of the American Medical Association (JAMA): Researchers analyzed mortality data of people in different weight categories, from underweight to obese, and found that there were fewer deaths among overweight people than those in the normal-weight group.


That finding may come as quite a shock for Americans, who have had it drilled into them that being heavy will take years off their lives. But evidence to the contrary has been mounting, and a 2008 report on the U.S. population published in the journal Archives of Internal Medicine made the issue impossible to ignore: Half of Americans who are in the overweight BMI category and a third of those in the obese one (30 or greater BMI) are actually healthy—they have plenty of "good" cholesterol, normal blood pressure and glucose levels, and no other risk markers for heart disease.

"In other research I was doing, I was seeing a lot of people who were heavy but fine," says MaryFran Sowers, PhD, a professor of epidemiology at the University of Michigan who co-authored the study. "What was surprising about the study results was that the number of healthy overweight people was so prevalent."

Lopez-Jimenez agrees. "We've long assumed that all people who are overweight have a lot of fat, and that people with normal weight have less fat and more muscle," he says. "We now know that's not always true. There are fewer unhealthy overweight people out there, and many more at-risk normal-weight ones than we thought." In other words, BMI is an imperfect standard. A simple height-versus-weight number can't account for how a person is built, lean or stocky, big breasted or not.

So if BMI is flawed, what is the best predictor of who is healthy and who isn't? In Sowers's study, there was one reliable answer. People who qualified as heavy but still healthy tended to report being physically active. Indeed, her study isn't the first to note this. Findings published in JAMA in 2007 indicate that fitness level—regardless of weight—is the single strongest predictor of mortality risk. People with the lowest level of fitness were four times more likely to die than those with the highest. Longevity didn't require superhuman effort, either; people who could pass a minimal fitness test of walking for longer than five and a half minutes on a treadmill had half the risk of an early death as those who failed the challenge.

Taking all the new findings together, the lesson is that even at 170 pounds, Leah Dawson had it right: Eat a good diet and drop any unhealthy habits you might have. Then focus on exercise and forget about striving toward some standardized ideal of weight. "Fitness is the critical piece we're losing sight of," says Church. "People get so caught up with weight—they start to exercise, the scale doesn't move, and they get discouraged. They're not noticing that their pants fit differently, that they've actually lost dangerous visceral fat. When you become active, you're not just adding muscle, you're getting healthier." And that's what will help you live longer.

From the March 2009 issue of O, The Oprah Magazine
As a reminder, always consult your doctor for medical advice and treatment before starting any program.