7 Questions You Need to Ask Your Gynecologist

Depending on the reason for your visit, asking these now can save you time, discomfort, complications or a follow-up visit later.
By Corrie Pikul 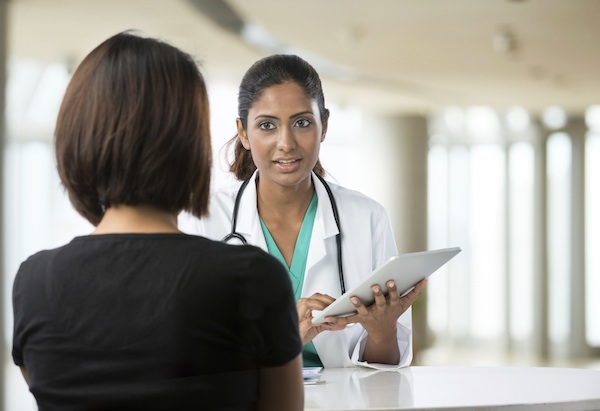 Photo: Thinkstock
If you're curious about the birth control device that's currently used by more than 2 million women in the US (at least 29 of whom have been trying to convert you)...

The question to ask: So how many of these wacko-looking things do you insert a week?

IUDs! It’s all anybody talks about. The popularity of these devices among women using birth control has been skyrocketing—from a teeny 2.4 percent in 2002 to 8.5 percent in 2009 (and these numbers came out before the release of Skyla, which is marketed to younger women who might have previously chosen the pill). Your experience with this device, at least at first, will hinge on your clinician's comfort and experience level. So you not only want her to explain the pros and cons, you also want to hear that she inserts them at least twice a week. One of the biggest negatives to the IUD is the risk that it could puncture the uterine wall. This is estimated to happen to about 1 in 2,000 women, and it's usually during insertion. Another reason skill level is crucial: The more familiar your clinician is with the procedure, the more likely she'll know techniques to decrease pain during the insertion—which, as you've heard, is practically a given.

If that unpleasant fungus that affects three-quarters of women seems to have a special preference for you...

The question to ask: Can you write me a prescription for a fluconazole refill?

If you know exactly what we're talking about, that means you're probably one of those women who is prone to yeast infections—you get them when you're on antibiotics, when you're super-stressed or when you return from a romantic getaway. At the first sign of an infection, you know to make an appointment with your doctor. Asking her for a refill prescription the next time you see her could save you some of the hassle. Of course, there's no guarantee she'll say yes—but it helps if you have a good relationship with your physician and if you've been keeping up with your Pap smears and wellness exams, says Michele G. Curtis, MD, a gynecologist based in Houston, Texas, and editor of a textbook for women's-health clinicians.

More Health and Wellness
9 Crazy Questions People Ask Gynecologists
6 Scary Things You Might Hear at Your Next OB-GYN Visit
Are You Ready for a Birth Control Makeover?
The One Question Women Should (but Don't) Ask Their Doctors
Do You Really Need a Pelvic Exam Every Year?
5 Things Your Gynecologist Can Tell from a Basic Exam
Nasal Spray Helps Pimples? Plus 6 More Drugstore Fixes
Outdated Women's Health Myths to Stop Believing Right Now