Can You Transform Your Whole Life in 60 Days? 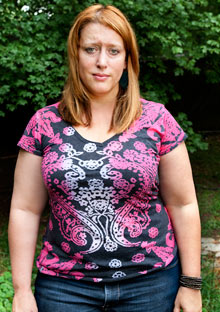 My life, at a glance:

Is it possible to pinpoint the moment a life swings out of balance? For me it happened "gradually and then suddenly," to borrow from Hemingway.

The slope started getting slippery when my father died in 1995. After my marriage failed a few years later, I left the beauty and comfort of Charlotte, North Carolina, and began my peripatetic period, living and working in ten cities (and one European country) within ten years. Along the way, I stockpiled debt by following divorce with graduate school (expensive) in New York (superexpensive) and by self-medicating my depression with stuff—I overpaid for rent, I indulged, I shopped. I have always believed quality of life can turn on a pretty, new set of cotton sheets.

The debt left me anxious and mentally exhausted. Then my body began throwing me strange new curves: Fibroid tumors grew in my uterus and surgeons had to cut them out. My eggs and estrogen bailed on me, making chaos of my hormones. As I worked harder and longer to get out of debt, I convinced myself that I was too busy and too tired to tend to my own wellness. Raised an athlete, I now exercised less often than Thomas Pynchon appeared in public. By the time I left New York for Atlanta, in the spring of 2006, a pattern had set in: anxiety, work, self-isolation, medication, and protracted sobbing mixed with flurries of rage.

You know what helps in painful situations? Pie. Also Big Macs. Publicly, I ate properly if at all, but nighttime triggered a junk food free-for-all. Because I ate poorly and didn't exercise, I slept badly. Because I slept badly, I woke up harried and late, so I never had time for breakfast. By noon, as I caffeinated instead of hydrated and often skipped lunch, I was already thinking about what I'd eat that night. I wasn't a snacker; I was a volume eater. Food was all I looked forward to.

For a while, my career was the one thing I managed to hold together. In the fall of 2008, I assumed the editorship of a small magazine out West. I treated magazine editing like neurosurgery—we didn't just have to be good, we had to be perfect, even as the economy imploded, even as the publishing industry took a particularly big hit. For a bajillion reasons, the situation didn't work out. I'd say the center couldn't hold, but I'm not sure there ever was a center. Wherever my slide started, it ended here: Stress + sugar + carbohydrate overload – exercise + insomnia – adequate water + self-loathing – romantic intimacy + regret = meltdown. One particularly fraught Friday morning I reached my limit with the magazine's publisher and failed, completely, to hold my tongue. By Monday morning, I was in the unemployment office.

The depression that had held me down for so long now dropped me into a well. My whole body ached. My hair fell out in the shower. For three months, I had a headache every day, often so painful that I'd lie with a cold cloth on my forehead, just trying not to throw up. Most nights, I went to bed with a heated terry-cloth beanbag around my neck like a boa, like I was 80. If I managed to sleep, I'd reflexively grind my teeth worse than ever. (It was an old problem: Years ago, when I was married, my then-husband woke me one night and said: "Are you eating candy?")

While looking for a new job, I had time to start exercising again, and to eat right, and to drink plenty of water, but I didn't. It was easier to relocate permanently to the land of dim rooms, dark chocolate, and all-day television, to outfit my wardrobe entirely in caftans. To paraphrase novelist Richard Ford, I was learning what's at the end of my rope and what it felt like to be there.

But there are problems and there are Problems. I wasn't dealing with a debilitating condition or an abusive husband or unremitting poverty or the death of a child or a male population that wanted me dead just because I wear lipstick; the only war zone I've ever lived in is the one in my head. My situation was self-imposed. I had choices. It was time to start making some good ones.

While lying fully clothed in my childhood bed in the middle of a beautiful and utterly wasted Mississippi summer day, I realized it was either get up—I mean really get up—or die. I don't know why, but I thought of Bikram yoga. I had tried Bikram a few times. I remembered appreciating most of all the permission to be quiet. I recalled the yoga room as a place where I could breathe.

Next: What Dr. Oz says about Paige's weight

Photo: Lauren Greenfield/Institute
From the January 2010 issue of O, The Oprah Magazine
As a reminder, always consult your doctor for medical advice and treatment before starting any program.

More Health and Wellness
The 60 Day Makeover: Part II
Dr. Oz's 5 Secrets of "Waist Loss"
5 Easy Ways to Cut Your Calories in Half
16 Thoughts That Can Make You Thin
10 Ways Hypnosis Can Help You Lose Weight—For Good
4 People Sabotaging Your Diet...and How to Stop Them
Weight Loss Books Every Motivated Woman Needs to Read
Coming Into Focus: 3 Photos That Will Change How You Think About Your Body