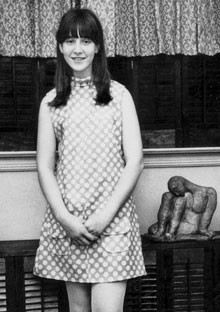 Robin, at age 13
PAGE 2
I should pause here to point out that despite my body-loathing, I'm not fat. My BMI is at the low end of the "healthy" range, I wear a size 8, and because I'm flat-chested I give off a pretty slim vibe.

But when I look in the mirror, what I see is not a small waist but massive thighs. When I was 21, I wrote a list on yellow legal paper: "What I need to be happy." Years later I found it again, crinkled with age. At the top of the list, number one—ahead of a rewarding career, a loving family, a house with lots of windows—is the single thing I thought would make the rest of my life fall into place: thin thighs. I wrote that list a long time ago. I am 56 years old, I still don't have thin thighs, and, dammit, I still want them.

Things were tough for us when Jessie was in her early teens—tougher than they were for the typical mother and teenage daughter. When I took her to a dermatologist to be treated for acne, she had a tantrum in the waiting room. I was mystified. I didn't see that this doctor visit was, to Jessie, yet another indication that my love was conditional. She thought I loved her only when she was clear-skinned and slim.

When she was 16, Jess—she had by then put a stop to "Jessie"—sat me down one night and told me she'd been bulimic for years. My first thought was she couldn't be, or she wouldn't be so fat. But I held my tongue and listened as she told me that it was my fault. She was bulimic, she said, because of my emphasis on being thin, my embarrassing comments about food in front of her friends, my obvious disappointment in her body.

"I'm not disappointed in your body," I said. "I think you're beautiful." Jess looked at me skeptically. "I do," I insisted. "Your eyes, your hair, your manner, everything about who you are—it's all beautiful." But my perceptive daughter heard the roar of words unsaid. I never said "your body," because to say I found it beautiful would have been a lie.

The summer after her freshman year in college, when she was 18, Jess suggested we try Weight Watchers together. I leaped at the chance, and we bonded over food restriction, each losing about 20 pounds. But by Thanksgiving Jess had regained every pound. I saw this as a setback. I failed to see what was really happening: that by eating normally instead of dieting, she was finally learning to love her body, however fat or lumpy. This emerging attitude was about to transform not only her relationship with herself but our fractious mother-daughter relationship, too.

More Health and Wellness
Dr. Oz's 5 Secrets of "Waist Loss"
16 Thoughts That Can Make You Thin
Could You Give Up Fat-Free and Low-Cal Foods in Favor of the "Real" Thing?
4 People Sabotaging Your Diet...and How to Stop Them
Weight Loss Books Every Motivated Woman Needs to Read
Is Your Personality Making You Fat?
Coming Into Focus: 3 Photos That Will Change How You Think About Your Body
Weight Loss Advice You Haven't Heard Before