Tonight's Takeout: Which Is Worse?

Burrito vs. burger? This nutritionist's advice will help you make better choices—plus show you how to order healthier.
By Corrie Pikul 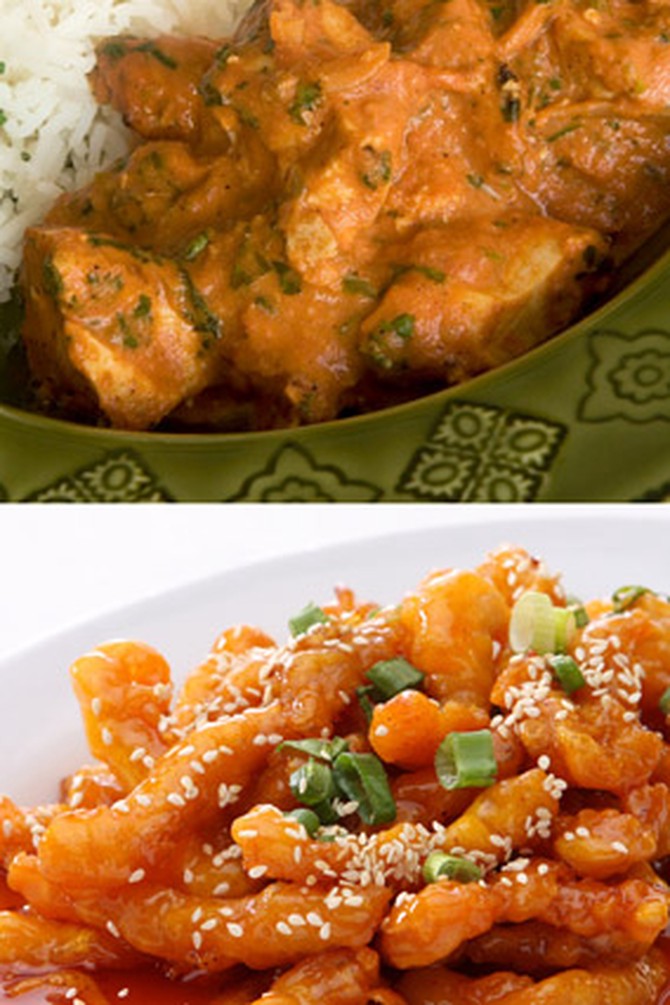 Chicken Tikka Masala vs. Orange Chicken with Rice
The preparation for all these dishes will vary, but we asked Janis Jibrin, RD, the lead nutritionist for Best Life, to analyze the basic recipes and track down nutritional info for chain restaurants. She found that although tikka masala has fewer calories than orange chicken (662 versus 871 for a 1.5-cup portion of the chicken dish plus 1 cup of rice), it has almost triple the saturated fat (17 grams versus 6 grams). This is because it's made with cream and, usually, ghee (clarified butter). Jibrin says tikka masala is worse for your arteries and your heart, as well as your waistline.

Healthier Tikka Masala: If you order a creamy curry, Jibrin advises limiting your portion to just 1 cup. Another idea for healthier but still-speedy Indian food: frozen entrées. Jibrin likes Ethnic Gourmet's Tikka Masala, which has only 260 calories and 2 grams of saturated fat.

Healthier Orange Chicken: Jibrin suggests ordering an all-vegetable entrée (such as stir-fried spinach, broccoli or green beans) with your chicken dish and sharing both with friends. Steamed veggies are the healthiest, but even Jibrin admits they get pretty boring. Instead, ask the restaurant to "go easy on the oil" when stir-frying, and substitute brown rice for white. 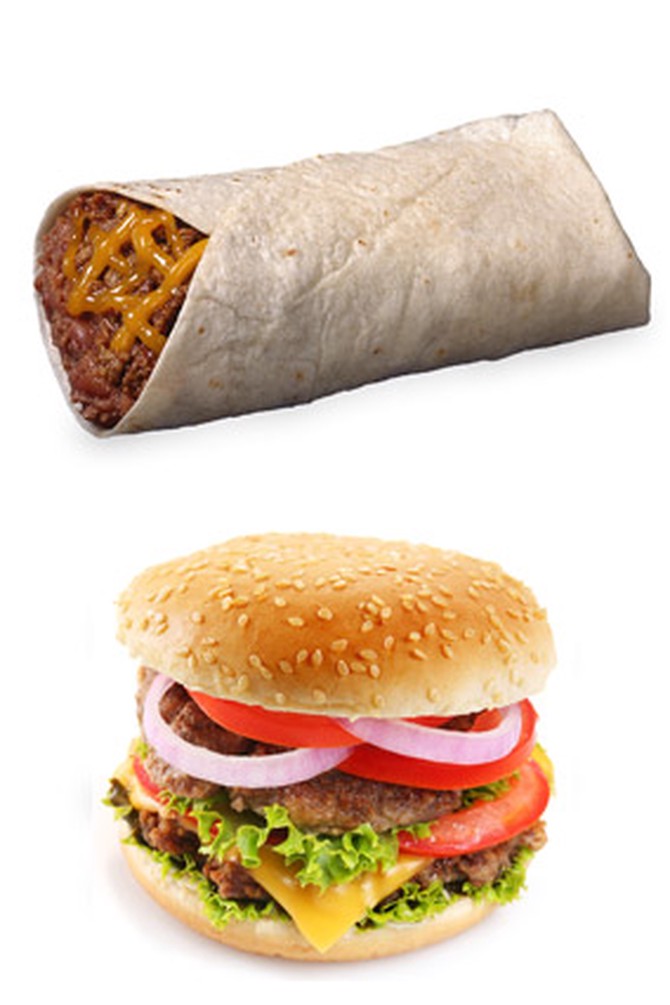 Healthier Burrito: Toss the tortilla and order your burrito "naked," or in a bowl. Scoop on heart-healthy guacamole and skip the sour cream and cheese to bring the total saturated fat down to around 5 grams. If you also substitute lettuce for half the rice, you'll turn your burrito bomb into a meal that's practically good for you.

Healthier Burger: Go with the puny-size patty (a regular burger from the drive-thru is 3.5 ounces, a Big Mac is 7.5 ounces, and classic burgers from family restaurants are even bigger). Add lettuce for bulk and tomato for antioxidants. Ketchup and mustard are negligible in terms of calories, but mayo has 90 calories per packet, so use sparingly. Hold the fries (but you already knew that). 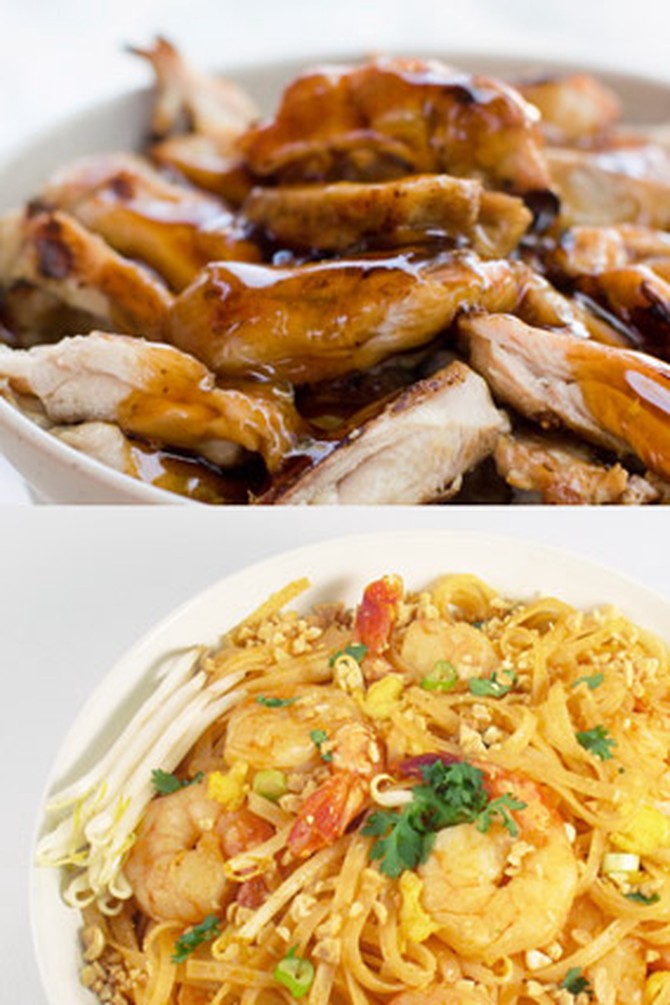 Teriyaki vs. Pad Thai
Jibrin says all the ingredients in pad thai are swimming in oil, which brings calories in the typical takeout box up to 1,140 and saturated fat to 7 grams. You're better off with a similar-size order of chicken teriyaki, which has 30 percent fewer calories than pad thai and about the same amount of protein.

Healthier Teriyaki: Jibrin recommends no more than a cup of rice (about the size of two fists) and another cup of chicken with teriyaki sauce. Order an all-vegetable side, and again, substitute brown rice for white. Inquire about low-sodium teriyaki sauce. (Like all takeout, both these dishes are loaded with sodium: 2,700 to 5,200 milligrams. The recommended amount is only 1,500 to 2,300 milligrams per day.)

Healthier Pad Thai: Request double the vegetables (usually bean sprouts, onions and scallions). The rice noodles are a waste of calories, and there are a lot of them, so aim to eat only about the size of three fists' worth of this dish. 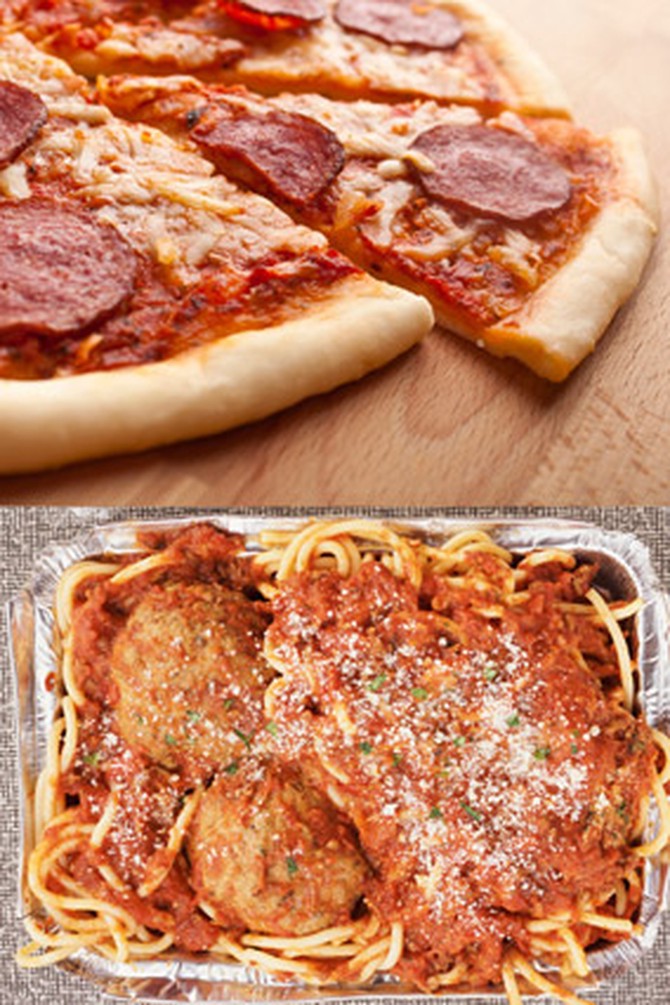 Pepperoni Pizza vs. Spaghetti and Meatballs
Viva Italian Night! What do you feel like? Two slices of Domino's medium hand-tossed pepperoni pizza (440 calories, 8 grams of saturated fat) or a half-portion of Olive Garden's spaghetti with meat sauce and two meatballs (460 calories, 7 grams of saturated fat)? In terms of fat and calories, they're pretty close, but Jibrin recommends the spaghetti as a slightly healthier option. "Processed meats like pepperoni usually contain nitrites, which studies have linked to cancer and coronary heart disease," says Jibrin (they also have tons of salt). The spaghetti has no processed meat and more "real" ingredients.

Healthier Pizza: Top your pie with vegetables. If you get thin-crust pizza, you'll cut the calories almost in half. Look for a pizza parlor that serves whole wheat crusts. "The extra fiber, as well as the phytonutrients from the veggies, would make this your healthiest choice," says Jibrin.

Healthier Spaghetti: You've heard it before: Order whole wheat pasta whenever possible. Pair your half-portion size with a side salad with oil and vinegar. ("Steer clear of the premade dressings, because takeout dinners have enough sodium," says Jibrin.) 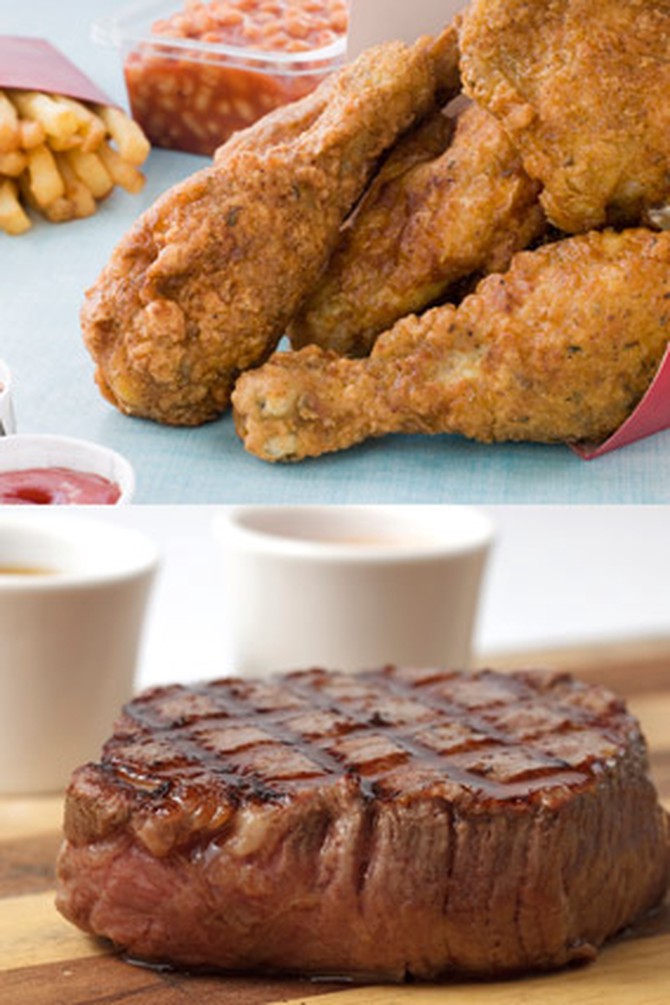 Healthier Chicken: Go for green beans (25 calories), an undressed salad (15 calories—splash on oil and vinegar at home) or a 3-inch piece of corn on the cob (71 calories).

Healthier Steak: Order a leaner cut of sirloin or tenderloin; calories and fat skyrocket in cuts like rib eye, prime rib, Porterhouse and New York strip. Avoid rich, buttery sides, and have your steak with grilled vegetables and a baked potato.

Next: Recipes for the fastest dinners on the planet
Published 02/07/2012
More Health and Wellness
The Best Drinks for Dieters
8 Cooking Resolutions for the New Year
Diet Cheat Sheet: Healthy "Junk" Foods
10 Steps to Help You Realize True Happiness and Inner Peace
What Spiritual Leaders Read Before Bed
Favorite Authors: The One Blockbuster Book to Read This Fall
4 Spiritual Practices That Will Get You Through the Roughest Times
4 Ways We Talk Ourselves Out of What We Want