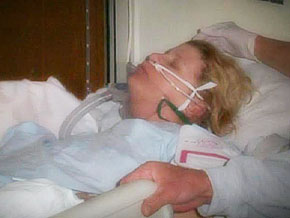 PAGE 3
Within 60 hours of cutting her finger, Tanya was fighting for her life. She had contracted necrotizing fasciitis—commonly called flesh-eating bacteria—and had to be airlifted to a larger hospital for emergency surgery. "I technically went from being fine to being on my deathbed," she says.

When Tanya arrived at the trauma center, a team of nine doctors worked furiously to save her life. Doctors say they watched in horror as the deadly bacteria jumped from her arm into her chest...right before their eyes.

Doctors began by amputating Tanya's arm and right shoulder but then realized it had spread into her right breast. "They had to keep cutting because that's the only way to get rid of it," she says. The surgeons decided to do a full right mastectomy. "It was the only way it was going to save my life," she says.

Published 04/28/2009
Please note that Harpo Productions, Inc., OWN: Oprah Winfrey Network, Discovery Communications LLC and their affiliated companies and entities have no affiliation with and do not endorse those entities or websites referenced above, which are provided solely as a courtesy. Please conduct your own independent investigation (including an investigation as to whether any contributions are tax deductible) before donating to any charity, project or organization. This information is provided for your reference only.