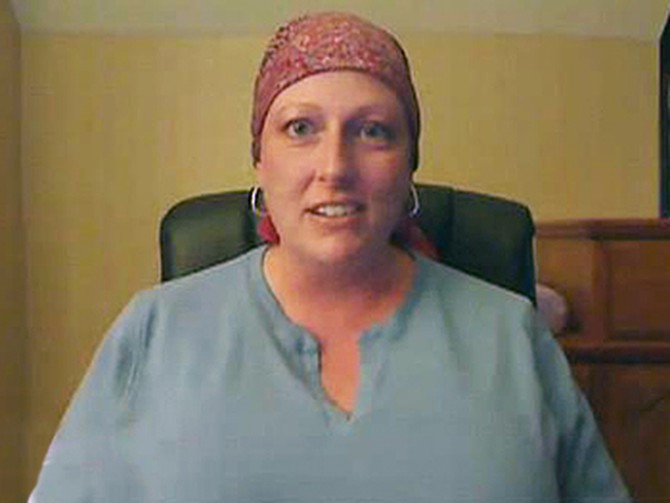 16 of 19
Dina, a Pennsylvania woman in the midst of breast cancer treatment, is also Skyping in to share her story. Dina says she discovered her cancer on her own a few months ago. "I was sitting on the couch, and I had a scratch and I found it," she says. At the time, she was 18 weeks pregnant.

Now, Dina is 37 weeks pregnant, and she says she just finished her first round of chemotherapy. Two weeks after the baby is born, she will go in for her second round, followed by radiation treatments.

Dina asks Dr. McAndrew what women can do to avoid a similar diagnosis. "I think that examining your breasts—pregnant or not pregnant—but especially during pregnancy, it gets very confusing," Dr. McAndrew says. When expecting, she says women may confuse inflamed milk ducts for lumps.

If you notice a persistent change or redness, Dr. McAndrew suggests seeing a physician. "Oftentimes your doctor will give you antibiotics because they think that you have a mastitis," she says. "If that doesn't go away, then one should probably be seen either by your obstetrics gynecologist or maybe a breast surgeon."

There are a few safe ways to investigate suspicious masses during pregnancy. "One can ultrasound. We don't tend to do mammograms during pregnancy. Oftentimes, the breasts are very dense at that point," Dr. McAndrew says. "Lactating breasts are extremely dense, and it's even hard to do an MRI in that setting. But the important thing here is examining your own breasts—realizing something is different [and] presenting it to your doctor so you can have the therapy."
Published 09/30/2008
PREVIOUS | NEXT
As a reminder, always consult your doctor for medical advice and treatment before starting any program.
More Health and Wellness
Tour Double RL Ranch
Fugitive Susan LeFevre
Weight Loss All-Stars
Hollywood Legend Michael Douglas
In Memoriam
Weight Loss Finale: New Bodies, New Lives
Little Geniuses on The Oprah Show
Nate Berkus' Den Makeunder