As told to Jihan Thompson 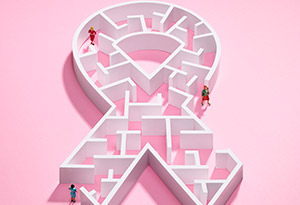 Photo: Adam Voorhes
PAGE 2
Fact: More than 85% of women who develop breast cancer have no family history of the disease.

Could it happen to you?

Setting the record straight about young women and breast cancer.

What are the odds?
Roughly 5 percent of new breast cancer cases occur in women under 40—about 13,000 diagnoses each year. "The younger you are, the lower the odds, but I have diagnosed breast cancer in women as young as 18," says Therese Bevers, MD, medical director of the Cancer Prevention Center at MD Anderson Cancer Center in Houston. The good news: The five-year survival rate for women under 40 is 84 percent.

Are self-exams still best?
Early detection is especially key for young women, as premenopausal breast cancer is often more aggressive and harder to treat than breast cancer in older women. "Nearly 80 percent of younger women find their own breast cancer lumps," says Jennifer Merschdorf, CEO of the Young Survival Coalition. "It's natural for young women to have lumpy breasts or cysts, and in most cases, nothing is wrong. But if a lump doesn't go away, you should absolutely get it checked out."

I found a lump. What tests should my doctor perform?
Mariana Chavez-Mac Gregor, MD, an assistant professor of breast medical oncology at MD Anderson Cancer Center, assesses the three most widely used options: If I do have cancer, will treatment rob me of my chance to have kids?
Some chemotherapy drugs have been found to genetically damage or destroy eggs or send patients into a type of medical menopause. Don't panic. The younger the patient, the more likely her ovaries and eggs will recover. And the options for patients whose infertility proves permanent are expanding: Now that the American Society of Reproductive Medicine has officially endorsed egg freezing for young women with cancer, it's expected that more insurance companies will cover parts of the costly procedure.

Next: Support for young women with breast cancer
Published 09/28/2013

More Health and Wellness
What's It Really Like to Live Through Breast Cancer?
3 Big Breakthroughs in the Fight Against Breast Cancer
Outdated Women's Health Myths to Stop Believing Right Now
9 Crazy Questions People Ask Gynecologists
Your Essential Sunscreen (and Skin Cancer Prevention) Guide
5 Wrong Turns That Can Lead to Cancer
The 4 Best Teas for Your Health
Do You Still Need a Pap Smear?