Go beyond traditional crunches and planks with these next-level core exercises.
By K. Aleisha Fetters 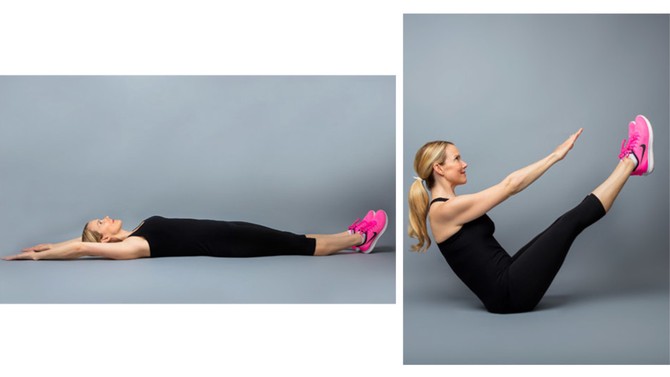 For celebrity trainer Kristin McGee—who has toned star clients including Emilia Clarke and Tiny Fey—there's more to enviable abs than what you see in the mirror (or photos). That's why her favorite core moves also help you fend off back pain and let you perform everyday activities without breaking a sweat.

V-Up
"This bodyweight move targets your rectus abdominis—aka your six-pack muscle—while also strengthening your deep-lying transverse abdominis, which acts like a girdle to pull in and stabilize your entire torso," McGee says. It's basically a crunch and plank in one—only better.

How to do it: Lie down with your back flat on the floor, arms overhead and legs extended straight out, so that your body forms one line from hands to feet. Squeeze your abs to lift both your torso and legs off of the floor and reach your hands toward your toes, keeping your legs as straight as possible and not letting your shoulders hunch forward. Pause for one second, then slowly reverse the movement to return to the starting position. Perform two to three sets of 10 reps. 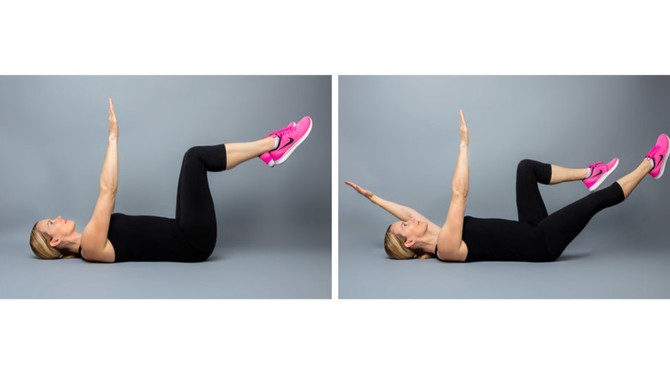 Deadbug
While planks are great at improving spinal stability, the move doesn't factor in that when your body actually needs stability, 9.99 times out of 10, your arms, legs or both are moving, she says. That's what makes this simple yet dynamic exercise so functional: By working your core together with coordinated arm-leg movements, it will help you perform everything you do, both in and out of the gym, more safely and effectively.

How to do it: Lie down with your back flat on the floor, your hands and knees pointed straight up toward the ceiling and your feet in the air (your knees should be bent at 90 degrees). Press your low back into the floor and engage your core to maintain this flat-back position throughout the entire exercise. Slowly straighten and lower one leg while you move the opposite arm backward, over your head and toward the floor. When your straight arm and leg are parallel to and hovering slightly above the floor (or you cannot lower any farther), pause for one second then squeeze your abs to slowly return to the starting position. Repeat on the opposite side. That's one rep. Do two to three sets of six to eights reps. 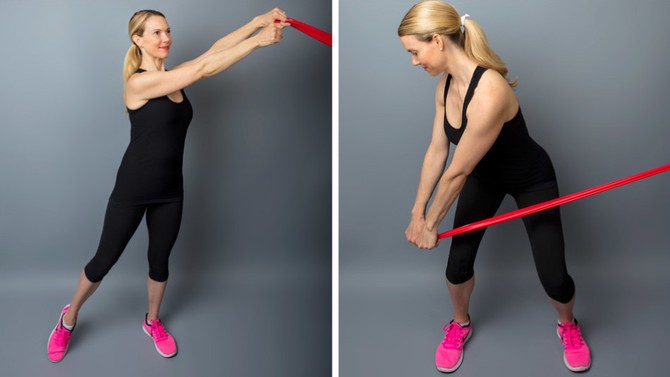 Woodchopper
"Most core workouts are lacking in standing rotational exercises, which really does their results a disservice," McGee says. That's because rotational exercises, especially when performed standing, hone in on the internal and external obliques, which run along your sides forming the coveted "deep V," and are in charge of rotating your torso.

How to do it: Attach a handle to a cable station* (or firmly tie a resistance band to a sturdy object) about a foot above head level. Standing with your feet shoulder-width apart and one shoulder facing the station, grab the handle with both hands so that your arms are fully extended and diagonal from your body. Squeeze your abs to pull the handle diagonally down and across your body to the opposite thigh, turning your torso as you do so. Pause for one second, then slowly reverse the motion to return to the starting position. That's one rep. Do 10 reps, then repeat on the opposite side. Complete two to three sets per side.

*The cable station weight should be enough to allow you to just squeeze out your last rep with proper form. 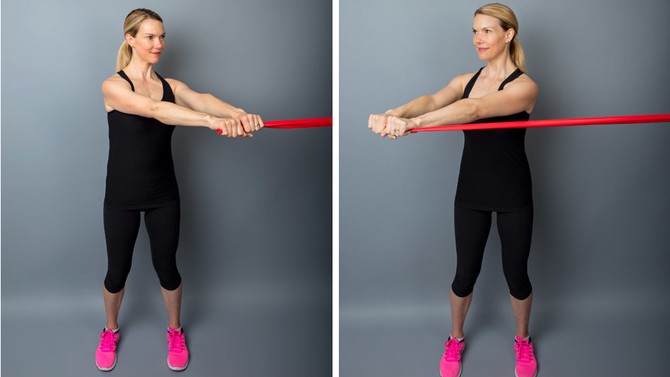 Standing Core Rotation
Don't let the pics fool you; this exercise is way more challenging than it looks, hitting the transverse abdominis and obliques to a degree that you'll be hard-pressed to achieve with other moves, she says.

How to do it: Attach a handle to a cable station* (or firmly tie a resistance band around a sturdy object) at sternum-height from a standing position. Holding the handle with both hands, with your arms fully extended in front of your body, take a few steps back from the station until you feel tension in the cable. Still holding the handle in the same position, make a quarter-turn away from the station to the right, with feet hip-width apart and knees slightly bent; this is your starting position. (The cable should be pulling your arms, still extended, slightly toward the station.) Squeeze your core and rotate your torso away from the station. Pause for one second, then slowly reverse the movement to return to the starting position. That's one rep. Do 12 to 15 reps, then repeat on the opposite side, making a quarter-turn away from the station to the left to start. Perform two to three sets.

*The cable station weight should be enough to allow you to just squeeze out your last rep with proper form. 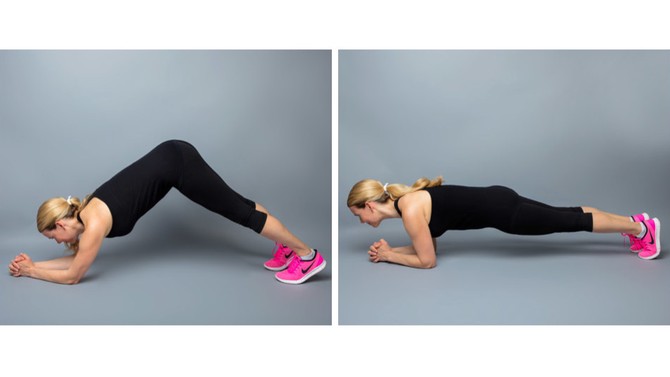 Dolphin Dive
This move may incorporate a pose that seems familiar, but it's far from your typical plank. The yoga-inspired exercise keeps you constantly moving—not only to prevent boredom, but also to work a large percentage of the muscles that make up your core, including those in your back, such as your erector spinae. "You have to train all 360 degrees of your core to gain proper strength and function," McGee says.

How to do it: Get in a low-plank position on your toes and forearms, elbows stacked directly underneath your shoulders. Then press your hips and shoulders back toward your feet and pike your hips up in the air so that your upper arms are diagonal to the floor and your lower arms are still flat on the ground. This is the starting position. Next, dive your chest down and forward, lowering until your body is in a low plank, forming a straight line from head to heels. Pause for three seconds, then slowly reverse the movement to return to the starting position. Do two to three sets of six to eight reps.

Want more stories like this delivered to your inbox? Sign up for the Oprah.com Healthy Body Newsletter!
Published 05/04/2017
More Health and Wellness
15 Tummy-Flattening Planks You Haven't Tried Before
The Best Ab Moves from Celebrity Trainers
The 4 Best Exercises for Your Core That Aren't Crunches
The Rock Star Workout
5 Ways to Get Fit—Without Getting Hurt
Burn 100 Extra Calories Today With Bob Greene's Strategies
The Best Workouts to Do When You're Too Tired to Work Out
5 Workouts Your Gym Doesn't Want You to Know About