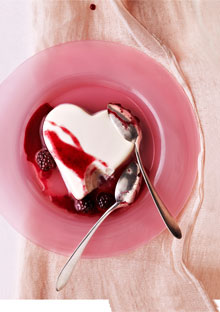 Photo: Anna Williams
Think chocolate is the sexiest flavor? Think again. We explore the surprisingly sultry side of the world's most fragrant bean.
I am in love with a chocolate lover.

You know—the kind who gobbles all the chips before the cookies ever get baked and pilfers the mini Snickers from toddlers' trick-or-treat bags. Chocolate is a magical food, and I totally get his passion. I do. But he, like most chocolate enthusiasts, is appalled and baffled by mine.

"Seriously?" my husband says, when the kids and I order vanilla cones. "Even though they've got Chock-full of Chocolate Chunkathon?" But I grew up in a family of unapologetic vanilla lovers, and oh, how its flavor intoxicates us—though that flavor is nearly impossible to describe. You might use vanilla to evoke the aroma of an oak-aged Chardonnay, or the top notes of a luxury French perfume. But how do you characterize vanilla itself? It's elemental, as remarkable and unremarkable as the air we breathe. And I do breathe it: in lattes, candles, custards, pound cake, bath foam, cookie dough, Häagen-Dazs, birthday frosting, and my late grandmother's Shalimar perfume. I inhale vanilla.

Obviously I'm not alone, given that vanilla continues to be the most popular ice cream flavor in this country, and the world's most popular flavor, period. Which is a little hard to believe, right? Don't you know way more people who are obsessively devoted to chocolate? Vanilla, for instance, has only 7,397 Facebook fans compared with chocolate's 1.8 million. Chocolate's got all that dark narcotic mystery going for it, that antioxidant righteousness and antidepressant rapture. When PMS comes around, even a vanilla lover like me will self-medicate with a brownie. Meanwhile, chocolate people treat vanilla like the white bread of the flavor world, a metaphor for blandness of all kinds. The expression vanilla sex, for instance, conjures dull images: Wake me when the librarians are done doing it.

But things are not always as they seem. In fact, vanilla is anything but unsexy, at least horticulturally speaking. Vanilla extract is drawn from vanilla beans, which grow from vanilla flowers, which are a type of orchid. And, with the possible exception of a fig, can you think of anything more botanically alluring than an orchid? Yet the vanilla orchid presents something of an erotic conundrum. The flowers are hermaphroditic, but maddeningly so: Each contains both male and female organs, star-crossed by a petal-like wall (think floral chastity belt). The virgin flower lives half a day at most, and pollination can be accomplished in nature only by hummingbirds and certain bees indigenous to vanilla's native Mexico. Attracted by the orchid's gaudy sensuality, the little bee buzzes so frenetically that it breaks through the barrier, spreading pollen from anther to stigma (a job cultivators must do by hand). The pollinated orchid then swells into a provocative, podlike fruit—the bean—whose unremarkable (to me) appearance has wielded centerfold-like power over certain male imaginations.

Spain's ruinous Hernán Cortés, for instance, encountered the bean among the Aztecs nearly 500 years ago. It would come to be called vainilla, the diminutive form of the Spanish vaina, from the Latin vagina, which means "sheath." So intoxicated was he by this pod that, as the story goes, he brought it back to Europe along with gold, silver, jewels, and—you guessed it—chocolate. In fact, Cortés had his first taste of vanilla as flavoring in the Aztec drink xocolatl. Is it surprising that the histories of chocolate and vanilla turn out to be as intertwined as a soft-serve twist cone?

I recount all this to my husband, for whom it only proves vanilla's role as chocolate's perpetual sidekick. He's lying in bed next to me, studying a chocolate body-frosting kit that someone has sent us as a kind of romantic joke: You're supposed to stencil your lover's body with sexy sayings and then lick them off, but my own lover jokes that he's just going to snip open the pouch and squeeze all the frosting into his mouth. I can't help feeling that vanilla is subtler somehow. There's a musky, floral flavor you can't always put your finger on—the softness underlying the chill in a minty cordial, for instance, or the dreamy, exotic fragrance in sautéed shrimp. You have to make these dishes extradelicious, of course, to placate the chocolate lovers—like the friend who smacked her lips over the panna cotta before saying, "Wow, you know what would make this even better?" Mm hmm.

Of course, that's just how I feel now in bed, about the chocolate tattoos. "You know what I'd love?" I say, picturing them creamy and aromatic instead of deep and chocolaty, and my husband says, "I do." Then he tears open the packet with his teeth and starts to write v-a-n-i-...

Get the recipes:
Sexy vanilla desserts

From the February 2010 issue of O, The Oprah Magazine