Rethink Fall Fashion: Find the Perfect Look for Your Taste

For every stunning trend this season, there is an opposite, equally lovely one. Here to prove it are eight gorgeous actresses from TV's fall shows, modeling chic looks that span the fashion spectrum.
By Clarissa Cruz 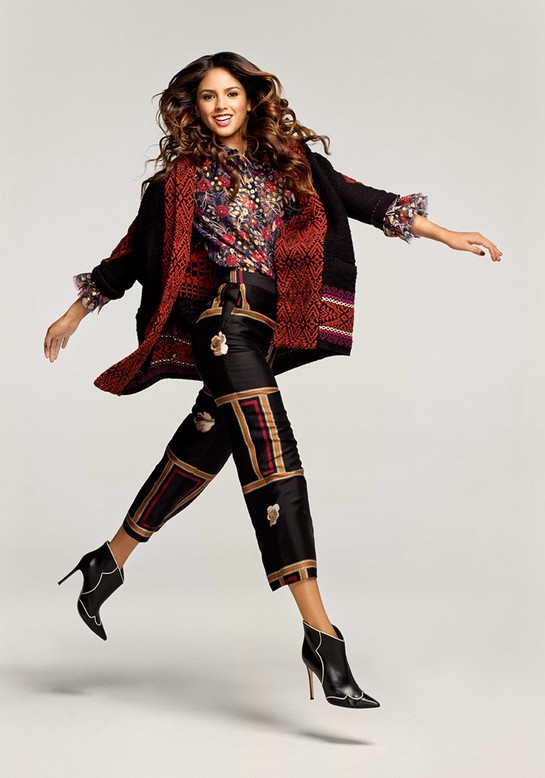 
Where you'll see her: Remember Salma Hayek's infamous snake-dancing scene in From Dusk Till Dawn? González plays Hayek's character, Santanico Pandemonium, in the TV series based on the 1996 vampire film. Helmed by the movie's director, Robert Rodriguez, the show is launching its second season on the El Rey Network.

Trend report: More is more when it comes to this chic mash-up of textures and prints that's part folkloric, part globe-trotter and all modern.

Personal style: "I tended to go safer when I was younger," says González, who starred in popular telenovelas in her native Mexico before moving to the United States last year. "But now I'm exploring my edgier side—a little sexier, a little more rock 'n' roll."

Fall obsession: "I want a really cool trenchcoat and boots. I love Balmain, Givenchy and Saint Laurent, but I also shop at vintage stores, Urban Outfitters and Free People."

Fashion Crush Miranda Kerr. "I love how she dresses. She's always so casual but chic."

Sweater, Lucky Brand, $149. Shirt, Tory Burch, $325. Pants, Suno, $650. Shoes, Gianvito Rossi.
From the September 2014 issue of O, The Oprah Magazine
PREVIOUS | NEXT
More Fashion & Beauty
9 Menswear-Inspired Pieces You Need This Fall
16 Fall Trends to Steal From the Runways
10 Floral Pieces Inspired By Adele (For Less than $100)
10 Nautical-Inspired Pieces for Under $100
9 Fall Coat Trends We Love (and the Boots to Pair With Them)
13 Embellished Pieces We're Loving For Fall
The $39 Bag that Looks Like $1,000 (and 8 More Finds)
The Most Flattering Color for Fall—And What to Wear With It